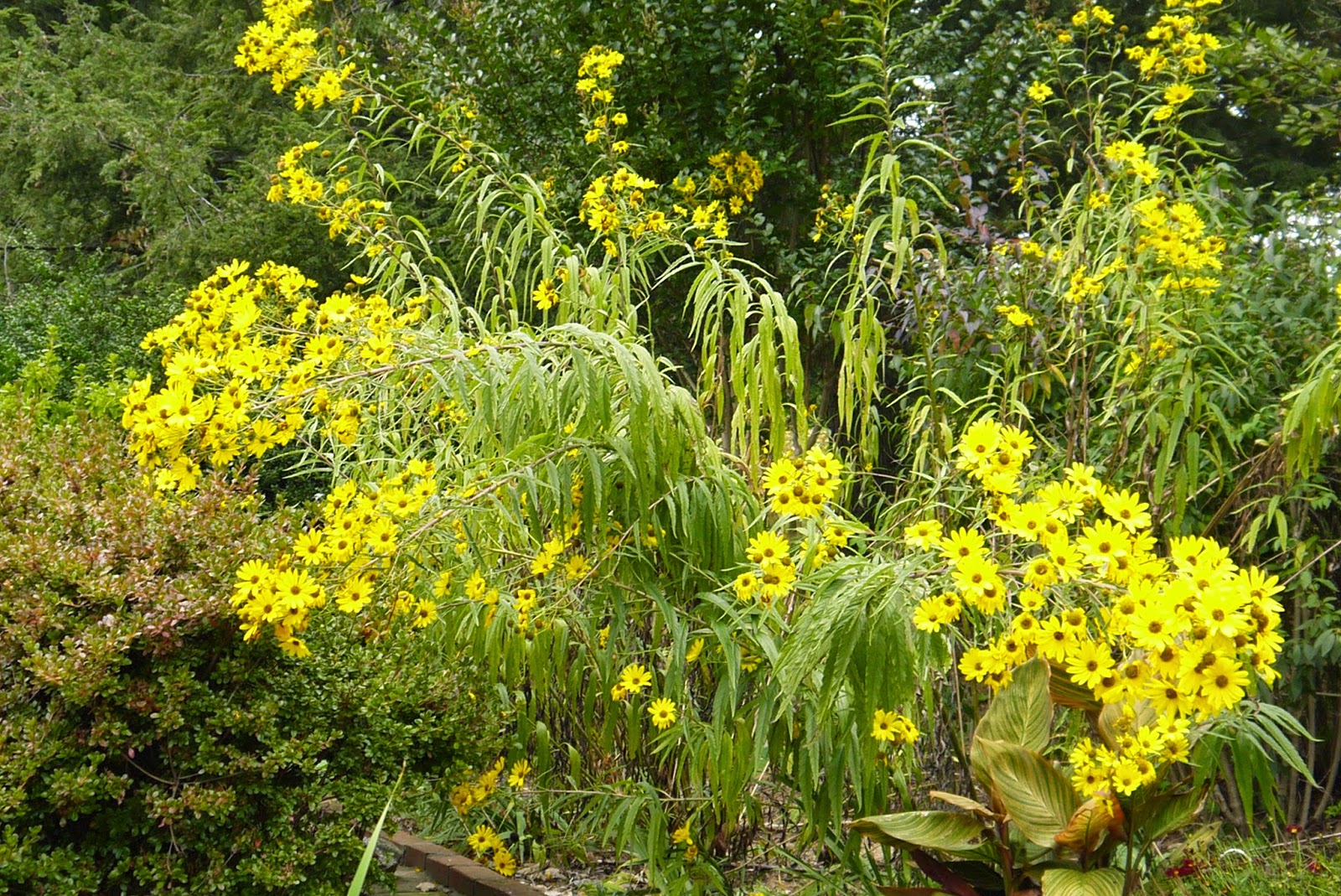 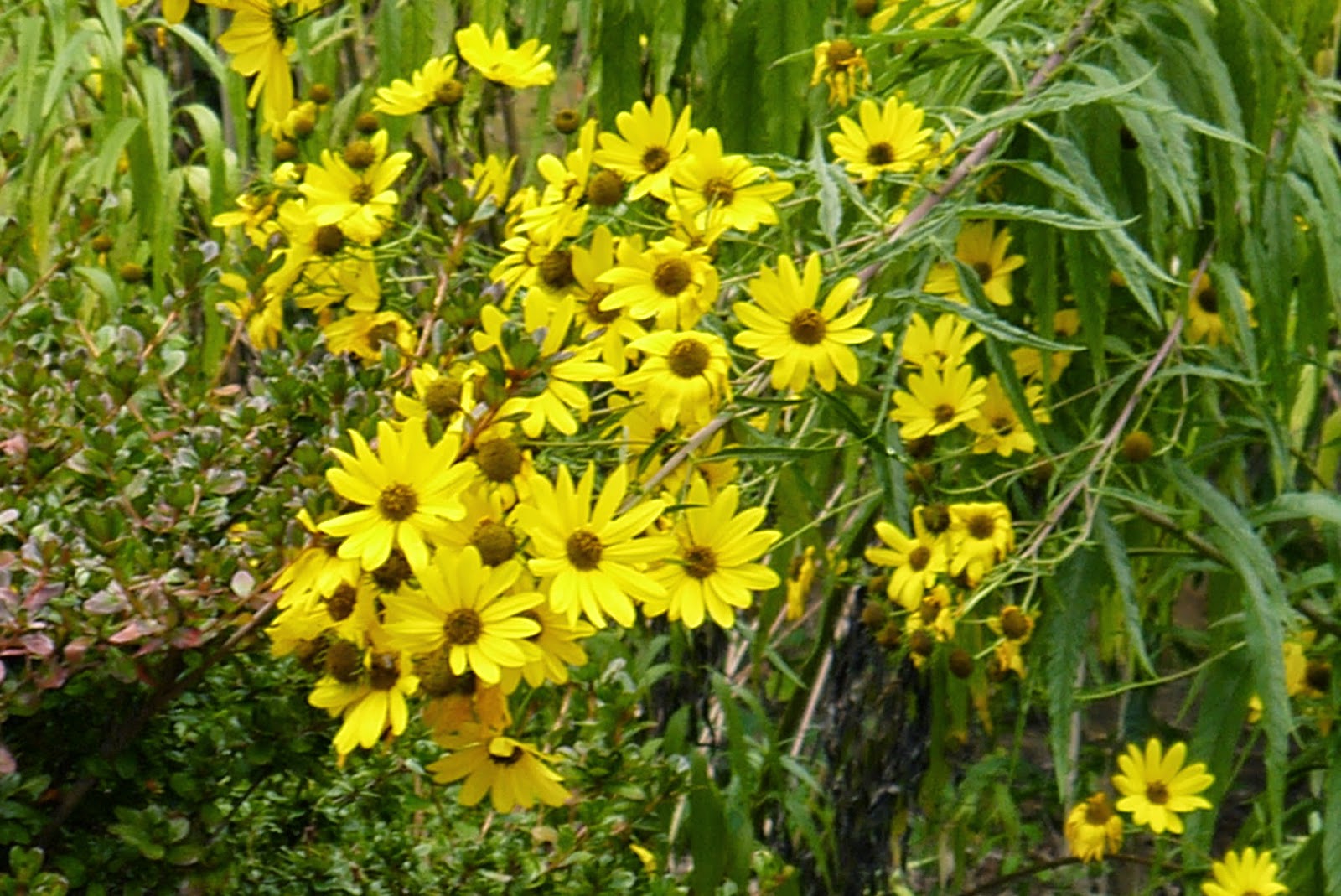 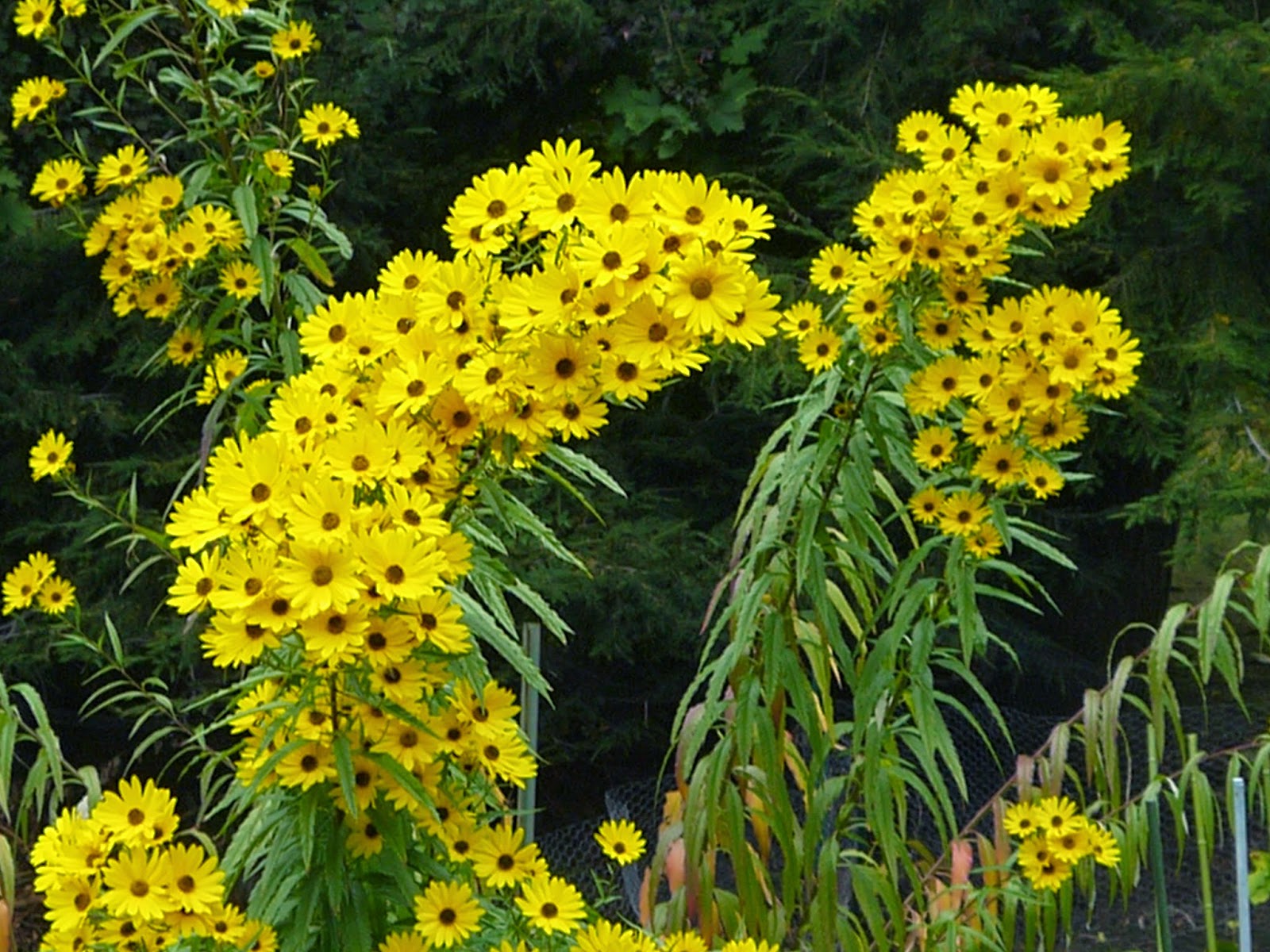 This rather imposing beast of a plant is something I grew from a seed that I got off my friend Andrew Block's helianthus that he had collected somewhere in NY I think. At the time we thought it was H giganteus and he also had H longifolius I think growing in his garden so I presumed what I got was a hybrid, but it may not be, it may be that "giganteus" was actually the species grosseserrulatus.  However we are not sure, because Andrew remembers the mother plant has being slightly different in leaf and flower, tending to not flower down so low on the stems, but more at the ends.  I also recall not finding many seeds when I harvested them which would lead one to suspect it is a hybrid, but I have seen it mildly self sow since we moved here, so that would suggest that it is a species.  Whatever it is, it is quite spectacular.  The lower pictures were from 2013, when it was in what was a vegetable plot on this property, where it grew to massive heights, maybe 10 feet or so.   The following spring I divided it, gave a piece to John Mickel, the fern expert who also worked at NYBG and lives within a short walk of me (and together with his wife Carol have some quite lovely gardens of their own), and put the rest behind the rectangular walled koi pond.  Actually the koi are just plain goldfish at this point, and I don't pay them much mind other than having my wife or daughter give them some food when they remember, rather I enjoy growing waterlilies in the pond.  Anyway we had a dry end to summer and early fall in 2014 so by the time they came into bloom in late September or October they were a bit wilted, even though I did water them with a hose a few times.  Still they grew huge and bowed under the sheer weight of the flowers.
Its funny that when I grew this in my old garden it was much more restrained, it never got over 5 feet or so but it was hemmed in between a Japanese maple and a barberry hedge.  My mom never liked it because it was one of those "tall weeds" of mine to her, but when it found its freedom here at the new house it went wild in all senses of the word.  I imagine this wouldn't be a plant for small gardens nor gardeners more obsessed with formality and neatness than I am, but if you want a real showstopper, this plant is hard to beat.  Just give it sun and some water, and stand back.
Posted by geranios at 12:34 PM

Did you save (willing to share) the seeds? This is beautiful.