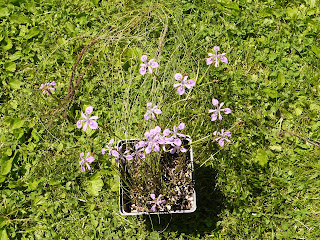 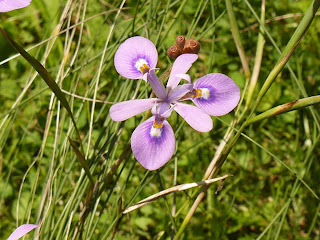 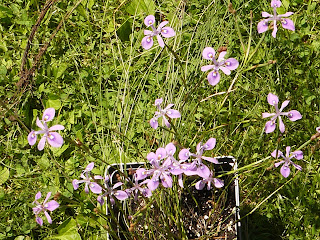 This little floriferous gem turns out to be M. elliottii, at least according to the label I found in the pot the other day (I thought it was M. thompsonii, another summer growing purple species).  Whatever it is, it is easy to grow from seed, and simple to deal with in winter, just store the whole pot with corms dry and cool.  The flowers are little works of art, and although each lasts about a day or so, more come over a period of several weeks.  I have not tested it for winter hardiness, though it has set ample seed so I have some incentive to try it in the garden in the future.  Most Moraeas come from the winter rainfall areas of the old Cape Province of South Africa.  There the genus is at its most diverse and one can only wish the stunning "peacock" moreas like M. aristata would be summer growers and thus more amenable to cultivation in areas other than winter rainfall mild climate ones.  If I were younger, I might dream of bioengineering some of the wonderful Cape bulbs to grow on a summer active winter dormant schedule, it probably is just a matter of finding the gene(s) responsible and swapping them out with genes from summer growing equivalents.  Or just add in some genes for cold hardiness and a delayed growth response (as in most crocuses and daffodils) and you would have a plethora of new "spring" bulbs for the garden.  In the meantime (aka back on planet Earth), there are several summer growers in this genus worth trying, and some are hardy in places like the UK, especially some of the yellow flowered larger ones like huttonii and its kin.   More experimentation is needed in the USA to determine which ones are reliably cold hardy and what other factors can lead to winter loss (for one I tried in my school garden, I suspect voles may have done it in more than winter cold).
Posted by geranios at 5:55 PM 1 comment: 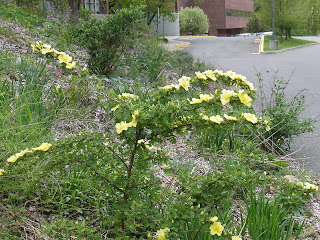 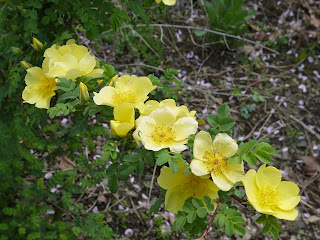 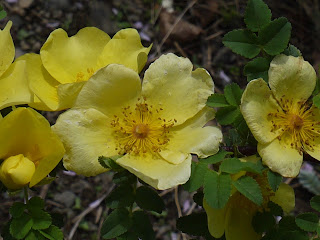 What a pretty thing this is when its in full bloom.  I grew them from seed, and they have become attractive small shrubs with an open habit in my school garden.  The yellow flowers are quite showy in midspring, and numerous hips are forming as I write this.  Sadly it only blooms once a year, but it also doesn't take over the garden later on like R. multiflora would if it could, as it is a major pest along our roadsides.  It does have lots of small thorns on the stems, which probably help deter deer from bothering it, at least in my experience so far they do ignore it.  It also blooms well before blackspot and other rose diseases get going in our humid weather, and I haven't even noticed if gets blackspot to be truthful.  In any case, it is a reliable early bloomer which does well without the fussing modern roses often seem to need in our climate.  Sometimes simpler is better.
Posted by geranios at 6:38 PM 2 comments: 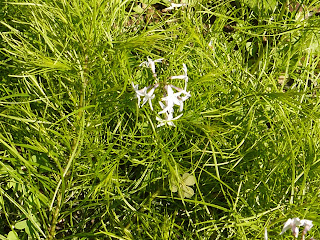 This is one really cool plant, I got it from Plant Delights by specifically asking for it when I didn't see it for sale during one of their open houses.  It is the only prostrate growing Amsonia, and it can make quite a large carpet of fine foliage as I saw in the nursery display gardens.  Its one of those plants a plant geek has to have, and I'm pleased that it has been hardy for about three winters up here in NY.  Critters ignore it, and it does have modest but attractive flowers in spring, not quite as showy as some of its upright cousins, but pretty enough.  It can be rooted from cuttings, and is a slow grower so its not one of those plants you will ever see in the big box stores (horrors!).  But after a couple of years it becomes a lovely soft carpet of foliage.  I planted it in a special raised bed in the school garden where it gets good drainage and good sunshine.
It is probably a new species, and is found as far as I know in one place in Georgia, so it won't be long before it ends up on the Endangered Species list, which makes shipping it across state lines problematic.  Some folks say it is just a prostrate form of A. ciliata, in which case it won't end up on the "List" but either way the cat is out of the bag and I think it will be well established in several gardens before it even gets an official scientific name, so its future is safe in horticulture at least.
Posted by geranios at 6:22 PM No comments: 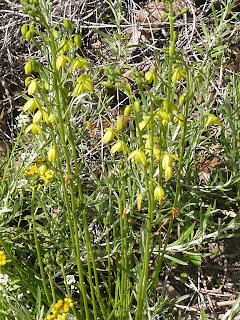 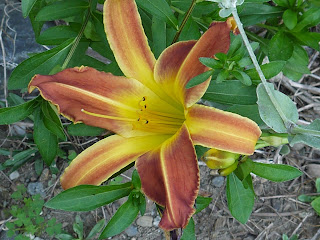 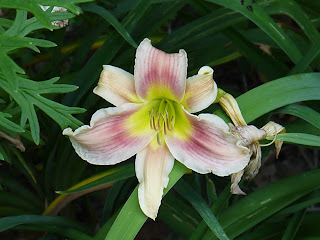 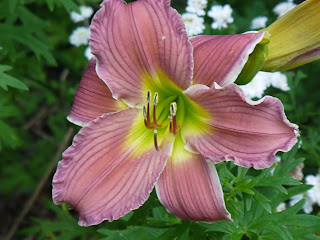