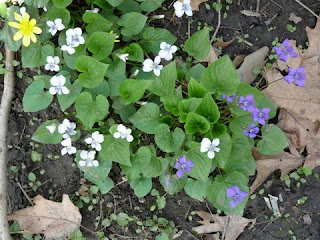 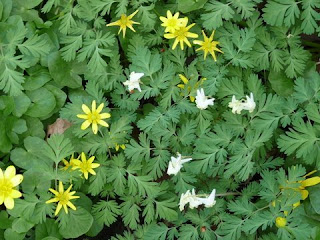 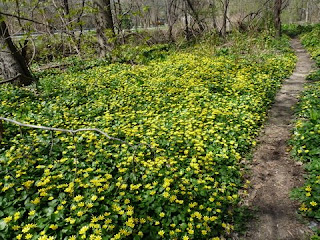 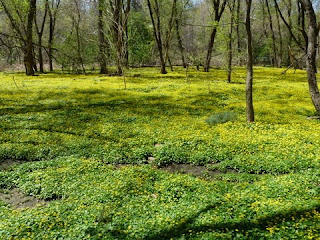 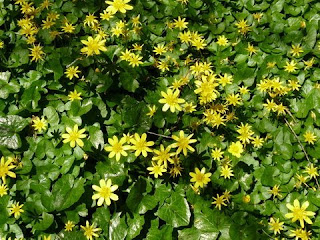 Even the strips of woodland left in this area are not totally safe havens for the local flora--some invasive species are becoming a major threat to the native residents of these small sanctuaries. Now I have to state up front, I am not one of the "natives only" purist type of gardeners, far from it, I myself have introduced a number of new species from southern Africa in particular to the US. I also enjoy the presence of some non native plants as nice bonuses in our local ecosystems, such as snowdrops (Galanthus) which bloom before any of our native woodland ephemerals and thus do not engage in serious competition with them. Scilla is a bit more aggressive, but will never overwhelm the natives, and besides none of them have flowers of such a piercing blue. But some introductions have taken excess advantage of their welcome, and really need to be checked, for they do threaten the native flora. Although I love the brilliant yellow flowers of the Lesser Celadine, Ranunculus ficaria, and even grow some much better behaved variants with double flowers in my garden, this species has run amok locally. I see its numbers increase dramatically every spring, and it easily overwhelms the competition. Even the much better known invasive, Garlic Mustard, cannot hold its ground when it is up against the ranunculus. It comes in a small flowered diploid form and a larger, presumably tetraploid, form, as can be seen in the closeup pic. R. ficaria prefers soils that are waterlogged in spring, but it can advance into drier areas, it merely spreads slightly slower in such areas. It reproduces by means of seed and tuberous little fingerlike roots which eminate from the crown of the plant. One of those tubers can make a whole new plant, and sometimes aerial tubers are produced in leaf axils as well. The entire plant mercifully disappears rather suddenly by June, but they are back in early spring (actually leaves begin to show by late winter) with numerous progeny to join them. While no threat to taller plants, R. ficaria is a devastating competitor with native forest ephemerals which also die back by early summer, for they cannot get enough light to make enough food to prepare for their summer dormancy. In the pics above, R. ficaria can be seen encroaching on a colony of Dutchman's breeches which will surely be overwhelmed next year. It also can be seen coming close to the tougher native Viola papilionacea (in two color forms, purple and white with purple center), the latter itself a bit of a native thug, especially when introduced to gardens, but never producing solid monocultures as does R. ficaria.
Speaking of gardens, R. ficaria has hitched a ride into my gardens and lawns. I've been fairly good at eradicating it from the garden, but much less successful with the lawns, it seems to do particularly well in lawns where nothing can outgrow it. In the garden it has to compete with numerous taller plants in addition to escaping my notice, both of which keep it in check. When pulling it out it is important to get every root "finger" because they detach easily from each other and are back the next year with a vengence. I really hope they bring over a pathogen or insect that eats this European menace. Actually I once ate some myself as a kid, when I mistakenly thought it was Marsh Marigold (a much larger native plant) and cooked the leaves as mentioned in one of Euell Gibbon's books on edible native plants. Fortunately I cooked the leaves, which apparently deactivates a toxin in the foliage which would not be good to consume in a raw state. From what I remember, they actually tasted pretty decent.

A Walk in the Woods 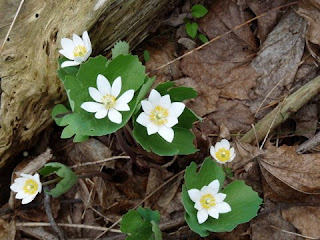 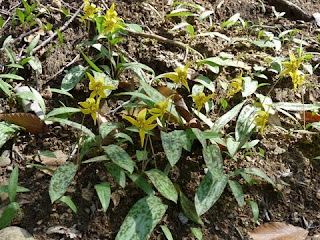 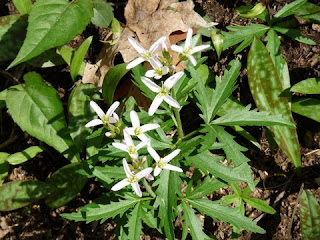 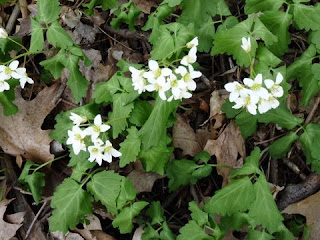 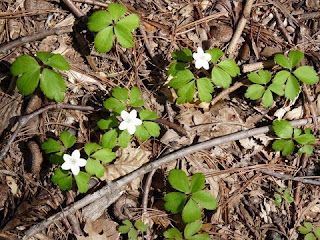 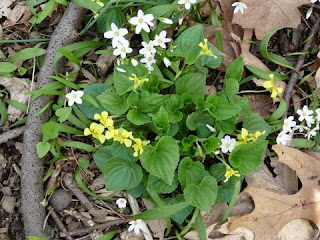 A week ago it was nice and sunny, so I took a stroll in a nearby park that borders the Bronx River here in southern Weschester County, not all that far from New York City. I tried out my new camera and got some nice pics of wildflowers in full bloom. Two species of four petaled white flowered Dentaria, D. diphylla (trifoliate leaves, a bit droopy in the pic) and D. laciniata were growing in the woods, along with yellow Viola pennsylvanica and spring beauty (Claytonia virginica), which were more common near the path and in more open areas. In fact the claytonia is far more abundant in the grass along the highway, it grows, seeds, and dies back before they cut the grass. I was late for the best of the dogtooth violets (Erythronium americanum), but I found a decent clump in bloom on a slope in dappled sunlight. The eight petaled Bloodroot (Sanguinaria canadensis) made an exquite display, but as others have found its presence in the garden seems to be fleeting, it grows fine one year and disappears the next. At least it does well in its woodland habitat. A single white five petaled flower atop a whorl of trifoliate leaves is characteristic of the diminutive Anemone quinquefolia, which forms small colonies in the woods, but is not as common locally as the other species mentioned. There are also thriving colonies of Dutchman Breeches, Dicentra cucullaria, in these woods, always on sloping ground, but most were fading fast by the time I got to see them this year. Woodland habitats are in fast retreat in this area due to development, so it is nice to know that even the small strips that remain offer a modest haven to our natural flora.
Posted by geranios at 4:19 PM No comments: