Searching for a Silene 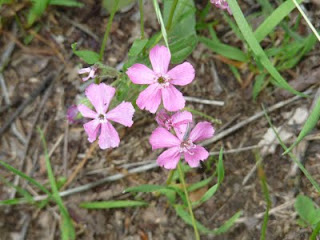 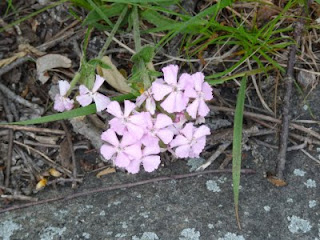 When I was a teenager, I remember walking deep into the woods to find out what those pink blobs of color I saw each May on the rocks above the highway were. I climbed a small wooded slope from the side opposite the highway until I reached a cliff which had a fence running down it, parallel to the New York StateThroughway which was straight below the cliff edge. The fence had an occasional hole in it, so I could access the cliff edge, though I never went too far, I didn't (and still don't) like heights nor danger. Some rocky slopes were inside the fence at the top of the wooded slope, and these too sported the bright pink Silene caroliniana var pennsylvanica that I had seen from the highway before. One time after part of the adjacent slope was denuded of trees when someone decided to build some apartment buildings below. That following spring the plants grew in abundance, sporting flowers in various shades of pink from light to dark. I imagine they liked the increased sunlight.
Many years later I remembered speaking with the wildflower curator when I worked at the NYBG, and told her that I saw these plants, but could find no mention of them in a field guide covering all the native plants the NYC area by the Brooklyn Botanic Garden. She had heard of the plant in the area, and told me it was considered rare in NY, and that the BBG field guide probably didn't realize that it was still extant in NY (I think a later edition added it in).
So finally one decent Sunday morning this past May I went out to the location where I remembered seeing the silene growing. I parked my car in the parking lot below the slope (despite the signs warning not to do so, the restaurant there was undergoing renovation) and hiked up the slope. There was more poison ivy and smilax than I remembered, but I carried on until I reached the cliff. It took me a while, but I spied some pink flowers in the short grass among the rocks, and found a few plants inside the fence, far fewer are there now than when I was a kid. I also found two fence openings, and a more robust population on the cliff margins outside the fence. It was past prime blooming time, but I was able to photograph some flowers and also gathered some stems with maturing seedpods and a few basal shoots for rooting. More seeds than I expected were produced by the ripening pods in the next few days at home, and the basal cuttings are still green so hopefully they are rooting.
Silene caroliniana var pennsylvanica is not a rare plant in general, but it is rare and localized in New York. I had no idea of that when I was a teenager, and would try and transplant plants to my small garden where they would die after a couple of seasons or so. It appears that they have a very specific habitat preference; very well drained acidic soil among large boulders, preferably in tight cracks, and with good sun exposure. This plant does not tolerate larger competion well, its immediate neighbors are grasses, Hypoxis hirsuta, Corydalis sempervirens, and some sort of small blue flowered annual linaria-looking thing. The soils it grows in must dry severely during summer droughts. It is opportunistic, spreading and/or growing more vigorously when nearby trees that cast shade on some plants are removed (in nature by fire), but fading out again as succession proceeds and the canopy closes again. The most secure plants are those on the cliff edge and and the cracks below it on the vertical side facing the NYS throughway--the latter are impossible for any human or animal to access. However development has occured nearby on the slope leading up to the cliff, it is a very developed area of lower Westchester county anyway. Not far north of there, also on cliffs overlooking NYS 87, is another colony I have observed from my car window, but a huge development of a mall and apartments appeared there in the last couple of years after the entire hilltop was cleared. Plants there can now only persist on the cliff face itself. So in both colonies the silene is only safe so long as the cliffs themselves are not dynamited during road widening or more development. However the silene's potential for expansion into nearby woodlands after fire or other successional event is nonexistant due to habitat destruction. Its long term future is also bleak since small limited populations separated by development from each other are more vunerable to extinction in general. I am not optimistic for its long term survival locally, in another generation the area it grows in will be indistiguishable from NY City.
Silene caroliniana in both of its varieties is a suitable plant for a rock garden, it being a natural chasmophyte after all. It is quite striking when in full bloom and has the potential to increase rapidly via means of the numerous seeds produced. I will start some seeds next year to try on the slope garden at school, in addition to what plants may result from the basal cuttings I took.