Pink Dandelions and other wonderful "weeds" 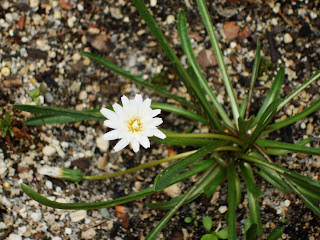 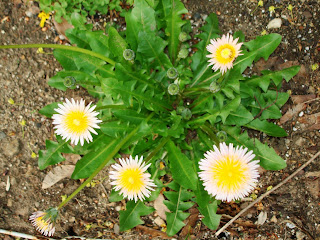 Dandelions are ubiquitous during spring around here, but show no variation except perhaps in size. All seem to come in bright yellow, not a bad color, but one yearns to see a little variation among the millions of plants coloring our lawns, roadsides, and gardens. Of course, dandelions in our gardens arrived there as unwanted party crashers, and are soon dispatched like any common weed, hopefully before their plumed seeds get a chance to escape to make yet more plants. It has often been said that if the common dandelion was a delicate and hard to propagate plant, it would be coveted by gardeners for its cheerful flowers and generally neat habits.
Still, there are some special dandelions that are worth coddling in the garden, if perhaps for nothing more than their differences from the common yellow version. My favorite variant of the few I am growing is Taraxacum pseudoroseum, obtained as such from a NARGS seed list a few years ago. It really is a pink dandelion, at least on the outer petals. Not a bright pink, rather a strange pale shade, with a somewhat subdued yellow coloration towards the center of the flower. It is identical to the common dandelion otherwise, so I have to pay attention to where I plant it so it doesn't get yanked out. I carefully gather seed either directly from the plant, or by placing seedheads in a glass of water indoors before they open up, so the wind doesn't get the seeds first.
I grew T. albidum, an Asian species, in a container on a small terrace, but the parent plants died during the severe cold late this winter. It is basically a white flowered version of our common species, and it flowered and set seed profusely last year. Some of the seed escaped my collecting, so there are now seedlings coming up in their original planter, along with a few blooming plants of T. pamiricum, another white flowered dandelion. This latter species is recognizably different than the standard dandelion; it is a smaller plant with narrow linear foliage. Flowers and seed heads are about half the size of the common T. officinale.
As with many seeds of plants in the daisy family, Asteraceae, seeds of Taraxacum are not long lived and will lose viability after a year or so, if not less. Storing them in the refrigerator will greatly lengthen their lives, so refrigerated seed can be a source of new plants for years to come, as well as a guarantee of sorts in case you lose your plants. These are not plants that you are likely to find in nurseries, and even seed collectors/seed lists may not have the same ones from year to year.
Posted by geranios at 5:44 PM 2 comments: 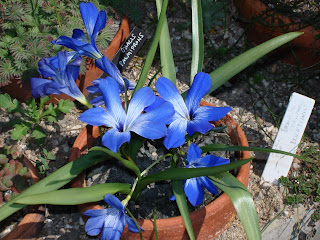 Blue is a relatively rare color in flowers, especially in its purer shades. This Tecophilia cyanocrocus was in bloom a few weeks ago at Wave Hill, a small but wonderful public garden in the Bronx. This is one of those plants that is very difficult to find in commerce, but much coveted by plant enthusiasts. It is a winter growing cormous plant from the mountains near Santiago, Chile. Long thought extinct in nature, it has been recently rediscovered in the wild. A good thing, since it is an amazingly beautiful plant. The form shown here has white at the base of the petals, but an all blue form also exists.
I finally got seed of this plant from the Archibald's seed list (an English couple who collect wild seeds and produce seed from their own garden/greenhouse plants) and have a small pot of several seedlings growing now. I will let them go dormant soon, and maybe in a year or more likely two, I might see some flowers like the ones above. Seed germinates best at cool, not freezing, temperatures, and should be sown in fall or early winter to grow during the cooler months. Mine grew under lights before going outdoors when the weather got better, but a cool greenhouse would be the ideal situation, unless one lives in coastal California or some other similar climate-blessed locale.
Posted by geranios at 6:28 PM 1 comment: