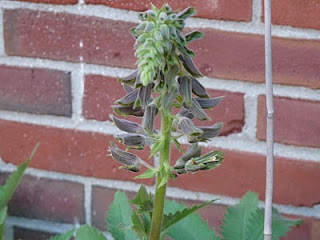 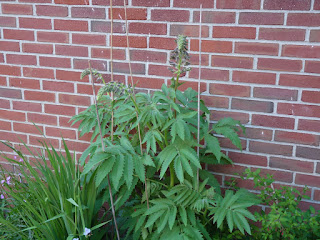 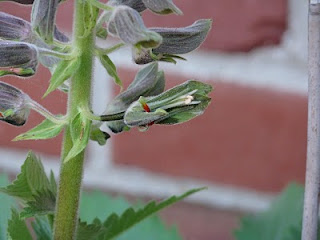 I brought a small plant of Melianthus a few years ago from Annie's Annuals when my wife and I were visiting California. I lost the tag, though I think it is Melianthus villosus. It has survived two winters against the wall in the school garden, both times dying to the ground and resprouting from the base. This year it rocketed upwards and flowered for the first time in June. The flowers are peculiar, kind of greenish dark violet, and if one handles them, a dark sticky liquid will stain your hands and clothes. In their native South Africa, honeybirds would pollinate them. Later, large three winged seed pods develop along the spike. I have not seen any seed pods thus far on my Melianthus, maybe it needs another clone to set seed. By now the plant is even larger than in the pic (taken in June), and I think I see another flower spike developing. It has grown robustly during this hot summer, relishing the heat, unlike its neighbor Fuschia magellenica (a clump of Gladiolus "Atom" can be seen on the other side of the melianthus), which is only now starting to recover from the hot weather by growing new leaves and flowers (it dropped some foliage during July/August and looked stressed).
I've tried a couple of small plants of Melianthus major, with striking blue green foliage, nearby, but thus far they have not made it through winter. To be fair, neither plant was as well developed as the Melianthus villosus, which I overwintered indoors the first winter to make sure it would get a decent chance to get well established before it faced its first winter.
I may try to root some cuttings of the melianthus before winter closes in, if they do take I would like to see if it can survive in a less protected slope garden location. While not a colorful plant, the foliage is attractive and the flowers certainly are interesting in a plant geek kind of way.