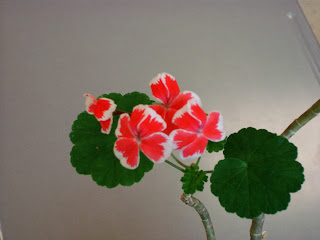 Pelargonium 'Mr Wren' is a "collectors" pelargonium. It was found, I believe, as a sport in someone's garden, where it grew as a branch off of a red flowered plant. It is a lanky tall growing plant, but the flowers are unique. Each red flower petal is bordered by a white edge that looks as if it were painted on. If it were a simple genetic trait, this pattern would be worth repeating in other color combinations, but progeny of Mr. Wren will produce mostly red flowered offspring, and none will have Mr. Wren's pattern. This is because Mr. Wren is a chimera, a plant with two separate kinds of cell lines in its makeup. It is literally two plants in one. Some years ago, while doing the literature search for my thesis, I came across an study where the researchers separated the cells of the flowers of Mr. Wren and regenerated plants from individual cells taken from the petals. Cells from the white portion only grew white flowered plants, while cells from the red portion produced red flowered plants. Apparently the two kinds of cells coexist in a pattern which is maintained by the meristem (growing tip) of the plant. Even so it is not uncommon for an all red flower cluster to appear on a branch of Mr. Wren. If so, that branch needs to be pruned off, and the branches bearing the typical flower pattern retained. 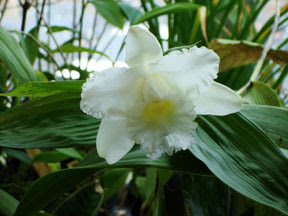 I love growing the peculiar as well as the beautiful, and its really great when both qualities can be found in the same plant. Not having a greenhouse makes it a challenge to grow Sobralias, as most of them are pretty big plants. Nonetheless I can't resist trying. I picked up this Sobralia, S. powellii, at one of the GNYOS shows some years ago. Luckily it has survived, and this winter it got to spend time in my classroom in bright light (alas, no sun ever enters my classroom windows, but they are really large windows) supplemented by fluorescent lights suspended from the ceiling. It has done well for a non-greenhouse orchid, and is shown with its second flower in a week. The white flower is exquisitely shaped, about 4-5 inches in diameter, and wonderfully scented. But, in the manner of nearly all of its kin, it is here today, gone tommorrow. I attempted to pollinate it, we'll see if it sets seed later on. More flowers will likely emerge from the sheath that terminates the growth that bears this flower.
Sobralias seem to adapt to a terrestrial mix (bark or peat based) with liberal amounts of perlite for aeration. Roots can rot easily, and this is the biggest danger to these plants. They also can grow in sphagnum moss, in fact newly imported plants often do better if they are planted in loosely packed sphagnum to regrow roots. However I summer my plants outdoors where excessive rainfall can make sphagnum a dangerous medium for sensitive roots. So if planted in moss, watering frequency needs to be controlled so that the moss dries out a bit between waterings.
Posted by geranios at 6:10 PM No comments: 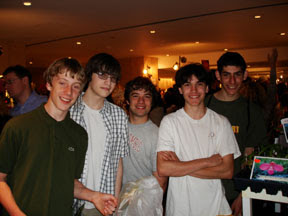 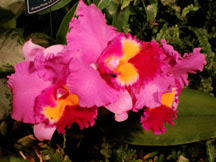 Posted by geranios at 7:10 PM No comments:

The GNYOS show is an event eagerly looked forward to by many in the New York City area. Vendors come from all over the nation, indeed many come from other nations, to set up displays and/or sell their wares. Last year the exhibit area was in the ice skating rink at Rockerfeller Center in mid Manhattan, this year the society had to make due with some rather narrow tents on the plaza itself. Still, despite the crowds, the displays were as always magnificent. The vendors were downstairs in the building right behind the display area, grouped into three areas. The orchids they were selling were a show in themselves. I offered my high school students in Chappaqua extra credit to go to the show and write a report with pictures, and many of them showed up. Several left with orchids in tow, who knows, another orchid addict or two may be in the making!
I once again swore to restrain myself when it came to purchases, and when I went to the preview for members on Wednesday, all was fine. I purchased five very nice cattleya type plants from a Hawaiian vendor for 10 dollars each, they are nearly blooming sized. I also got four somewhat more oddball types from another vendor, things like pleurothallis and platystele. I brought the Platystele stenostachya into school to show my students and explained that this plant, with its minute flowers, is an excellent example of an orchid geek's type of plant.
I went back with my wife on the last day, Sunday, and caught the sale at the end of the show. Some of the vendors, mainly from far away locals, sell off their remaining stock for better prices then, but you have to be willing to bargain in many cases. The upside is that many plants can be gotten quite cheaply, the downsides are that some of the most choice plants are already gone, the plants may have damaged/rotten roots from being packed in moist sphagnum or taped up for a week plus, so you need to be prepared to work to get them to regrow roots, and by then the plants are stressed in general. Its also too easy to go a little nuts, as we did, and end up getting over 300 dollars worth of orchids! Also one takes chances one might not normally take with higher priced plants, like picking up a nice Odontoglossum crispum, knowing that it demands cool conditions, which will be difficult to provide in New York during the summertime.
Some other notes about the show include the appearance of the Phrag. kovachii hybrids, they are lovely plants with stunning colors from their kovachii parent. I don't know a lot about them, they are still way out of my price range, as is the species itself, but they sure do look pretty. Its a shame that the species itself is in real difficulty in its native habitat, due to poachers stripping out wild populations. All that it needed for many to enjoy this flower is to have a few seedpods flasked, and indeed this is being done, and the seedlings are beginning to appear for sale. Hopefully P. kovachii won't be completely extinct in the wild before the availability of lots of cultivated seedlings take the pressure off whatever few wild plants remain.
My wife likes the "showy" orchids, the cattleyas are her favorites. The hybrids come in so many sizes and color combinations that its hard to make a choice sometimes. One that we have enjoyed for a couple of years, and which seems unusually easy to bloom indoors for such a big plant, is BLC Burdekin Wonder 'Lake Land'. We got a very large plant at the end of a show 2 years ago at a good price. Upon getting it home, I thought the flowers were kind of small and unremarkable, but I didn't realize at the time that they were the products of a show stressed plant. It has rebloomed several times since, with huge white flowers with yellow in the lip. A few days after they first open, a wonderful fragrance permeates the air until their demise a couple of weeks later. This is my wife's favorite plant by far.
Posted by geranios at 5:52 PM No comments: