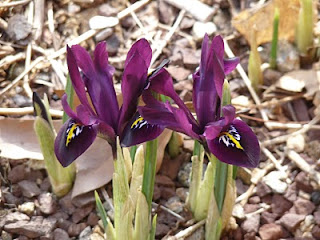 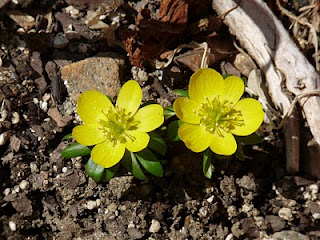 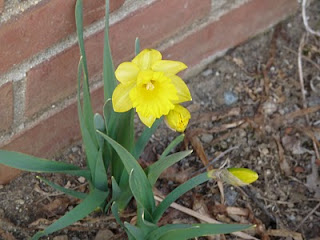 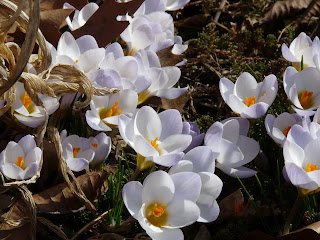 I took the pics above just before the last nor'easter in my school garden. This part of the garden is protected by a south facing wall, and things get moving there earlier than elsewhere in the garden. The daffodil is one of the early blooming varieties, probably Rijnveld's Early Sensation, though since I didn't label it I am not absolutely certain of the variety. One of the Iris reticulata cultivars or hybrids popped up with large richly colored purple flowers, right after the first of the snow crocuses, Crocus chrysanthus cultivars, appeared. However, the earliest of all spring flowers is usually the winter aconite, Eranthus hyemalis. It's only serious competition for earliest spring bulb appearance is the snowdrop, Galanthus nivalis. This cheery buttercup like flower emerges as soon as the snow melts, or even under the snow if it lies around long enough. It grows from a blackened tuber that looks more like a rock than a living organism. The tubers are often soaked before planting in the fall, though I don't think it makes much difference. Purchased tubers may not always give one hundred percent success, since they may dry out too much if not planted as soon as possible after they are recieved. Nonetheless, once they get established, winter aconites seed abundantly so that within a few years drifts of them begin to develop in gardens where are happy. In my home garden this is happening, and its a real delight to see many dozens of them appearing in random spots throughout the garden.
Right now we are entering into a five day period of exceptionally nice sunny weather, with highs in the 60's F predicted. This will bring out even more spring bulbs, and perhaps other early flowers like Viola odorata. Already I see a few hellebores in flower at home, and see buds developing on nearly all of the hellebores I grew from seed I got from Elizabeth Town in Tasmania, Australia a few years ago. They are special plants indeed, a couple of precocious white doubles bloomed last year and I see darker buds among several of them this year. There should be a mix of anemone flowered, double, and really nice singles among them, so I am quite excited at what I will find.
Posted by geranios at 6:14 PM No comments: 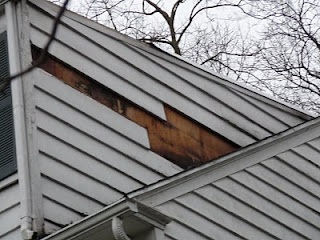 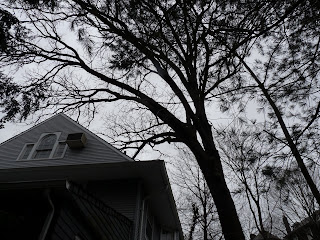 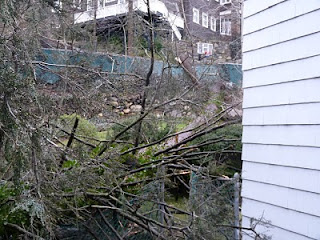 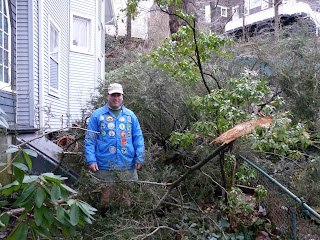 As the years go by, it seems the storms are getting stronger than they used to be. The last couple of weeks have been a real eye opener, first the huge snowstorm that downed more trees than any storm in my memory, then the massive wind/rainstorm this past weekend that finished off several more trees. The pics above show the results of the latter storm at my friend Andrew's house. In one of the pics he is standing where he actually was the day before, when the neighbor's huge hemlock tree came crashing down. He ran for his life, good thing he heard the crack as the tree broke while he was righting some potted plants during the storm. He is convinced that he wouldn't be here if he hadn't looked up to see the tree falling in time to escape. It crushed the fence, and presumably two rhododendron bushes and a hardy clerodendron as well. The extent of the damage won't be revealed till the tree is chopped up and removed, but it could have been much worse. Another pic gives a better idea of the tree's size, it can be seen laying across the neigbor's yard before the top hit the fence between the properties. Andrew has a better appreciation of large trees than I do, but even he had to admit that the neighbor's huge oak towering over his house, which moved about 10 degrees or so off vertical towards his house during the storm, is a dangerous situation, so the neighbor will have to cut the tree down. Frankly if it were my family, we wouldn't have stayed in the house till the tree was cut down, but all seems fine so far. In my own home, a loud thunderclap heralded a lightning bolt that my wife said came in the window in front of where she was washing some dishes, and our daughter reported red and blue bolts arcing down from the kitchen light behind my wife. Fortunately everyone is okay, but it was quite frightening to realize that we might not be safe even in our own home, especially as the thunderclap came with no advance warning. As I continued my survey of the damage in Andrew's yard, we noticed the other neighbor's house had siding stripped off one of the walls. To quote my friend "that's what hurricanes do!". Ummm....Exactly.
The previous snowstorm, which was a massive nor'easter like the rainstorm that followed, felled countless trees and limbs, many of which I have been observing on my way to work and back. The Bronx River, Taconic, and Saw Mill Parkways are all littered with limbs, broken trees, and uprooted trees all along the roadsides and into the forests surrounding them. All of these major highways have been closed at times during the worst of the storm's fury due to fallen trees.
While one can never say with certainty that a particular weather event is due to climate change, there certainly seems to be a trend towards windier and more violent storms in our area over the last few years. For much of the US that would not be a major departure from normality, but in this area we have always felt safe from real weather extremes, we generally don't get really bad storms of any kind, and its been many decades since a serious hurricane hit. In my view, the prediction of more violent and extreme weather events that would be expected as a result of climate change due to anthropogenic warming seems to be coming true, in subtle and not so subtle ways. If there is a silver lining (albeit a small one), it is that us zone pushing gardeners will find that more plants can survive in this area as the USDA zones continue their slow march north.
Posted by geranios at 5:13 PM No comments:

Pelargonium tetragonum--and how what goes around comes around! 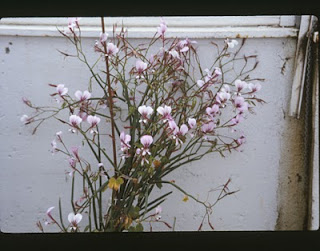 I collected this nice purple flowered form of P. tetragonum from a garden near Gaborone Botswana way back in 1984, during my first trip to southern Africa. I maintained it for many years, and in the greenhouses at Cornell it flowered magnificently during spring. To get the huge four petalled flowers requires cool greenhouse culture in the north since it requires a cool period with short days to set flower buds. I also took the plant to the NY Botanic Garden when I worked there, but somewhere along the way I lost my plant. Later on, I ended up caring for someone's orchids and other plants while he was away for an extended period in Florida, to which he enventually moved. It turned out he had a small plant of my P. tetragonum, given to him by my friend Elena who grew it for a time in a NYC apartment, but then gave it to him. I got a small cutting back, and now maintain several plants of it. Although I am unlikely to get flowers under my indoor growing conditions at the moment, it is just about the easiest thing to grow and propagate. It is a rather sprawling plant, but stems are brittle and break easily when the plant is moved or otherwise disturbed, providing a ready means of further increase. Although it comes from the winter rainfall areas of the Cape of South Africa, it does not seem to mind summering outdoors, and even grows some more during what should normally be its off season. It grows well under lights too. I have another form growing from seed, and it too is an easy grower. Its a good subject for those who like wierd, though it needs to grow large and get the cool/short day treatment to get the fabulous flowers to appear.
Posted by geranios at 6:58 AM 1 comment: 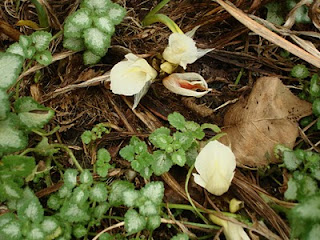 I got my start of this intriguing plant from a friend in Bronxville, the town next door. He has had a patch of it growing for some years, and also has a white variegated leaf form which appears to be somewhat less vigorous. My division has also spread a bit, producing typical ginger type foliage which remains green through the growing season. The foliage dies back completely come cold weather, and new shoots emerge when it gets warm. Most peculiar are the pale yellow flowers which appear around August, they come in short inflorescences which pop randomly out of the ground like some kind of strange mushroom. Eventually the attactive pale flowers open, just above ground level. I have read that the young inflorescences are edible, and in fact are rather esteemed in Japanese cusine, but there are also references which suggest they might have some carcinogenic potential, so for now I think I'll pass on the culinary option. No special winter protection appears to be needed for this ginger, since it has come through many winters without attention in my friends garden and several also in my garden.
Posted by geranios at 6:41 AM 4 comments: 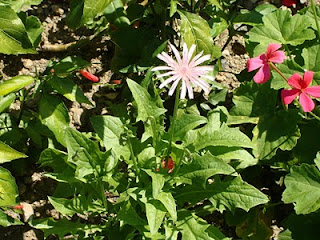 This is a rather attractive little annual, kind of like a pink dandelion, or a mini pink gerbera of sorts. The seeds are very thin and long, at first I thought the seeds were not viable b/c they were so thin. But they do germinate easily, and quickly produce rosettes from which emerge pink flowers over a fairly long period of time. Crepis rubra does not take kindly to too much competition though, it is a sun lover and is easily swamped by larger plants. Abundant seed is produced in much the same manner as dandelions.
Posted by geranios at 6:36 AM No comments: