Yes there is a strange dogwood in our yard.  I would have had it cut down as it has dieback on one major limb and is past its prime, but having seen it flower I knew it was something special so it was spared from the saw.  In fact I had some nearby hemlock branches cut so it could get more sun, and I do water it when it gets too dry, as was often the case last summer.

The flowers don't quite open, and most closely resemble a subspecies of Cornus florida that occurs in Mexico, ssp urbiniana.  Yet I find it hard to believe the previous owners would have gotten their hands on this much sought after subspecies.  They did like pretty bushes and planted a lot of azaleas and rhododendrons, most of which remain, along with forsythia, lilacs, andromeda, and other common shrubs, some of which I have eliminated or reduced. But if this dogwood is not urbiniana it must be a mutant which coincidentally results in the same caged flower appearance as ssp urbiniana. It is attractive in a different sort of way, and I am trying to propagate it.  Cuttings that I took and also brought to NYBG failed, so I am trying to ground layer it.  I also have pots of seedlings coming along but as dogwoods are self sterile from what I read, I assume the seedlings have a regular dogwood father.  What I don't know is if the caged flower trait is dominant or not, so I won't know what the offspring will look like until they bloom, which could be a long time. 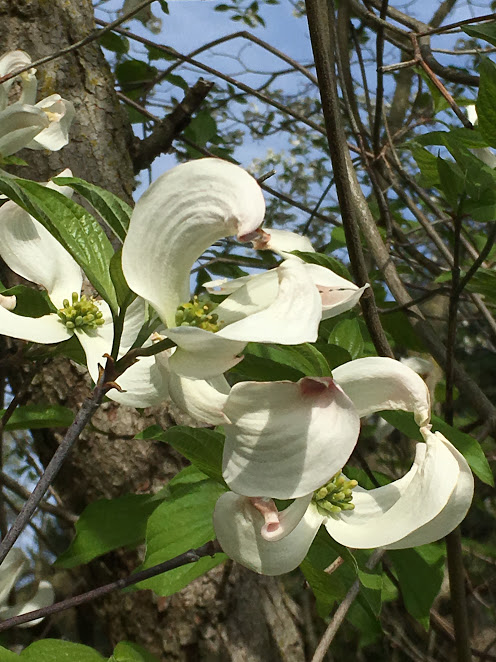 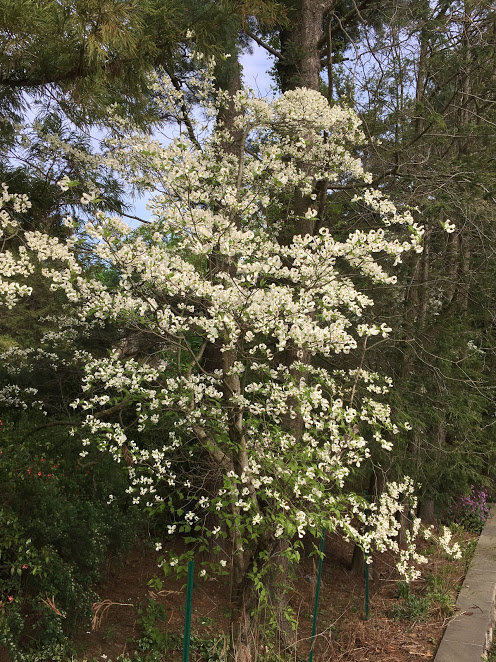 The tree has been making more flowers since I had the hemlock branches in front of it removed.   I still need to remove a dead limb from the tree, but overall I think it is liking the renewed attention it is getting since we got here 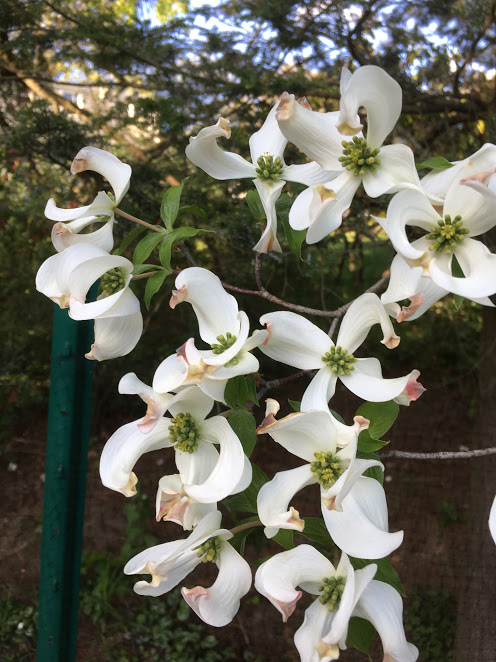 Many flowers eventually open but never flatten out like normal dogwoods, and all the bracts have that odd keel or fold in their middle. 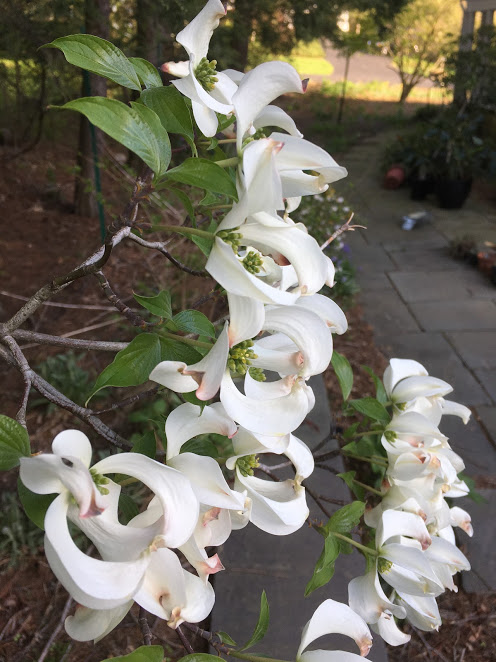 Odd indeed but I like it.
Posted by geranios at 7:49 PM No comments: 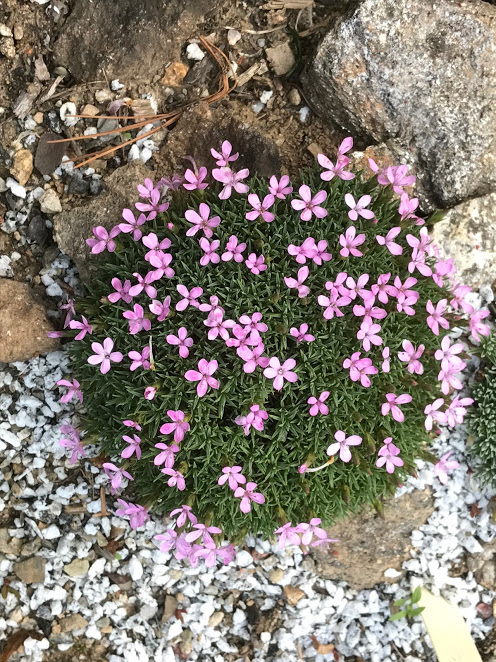 A minute cushion forming species which I got from rock gardening friends who got it from Wrightman Alpines.  It was given to me as a small rooted cutting and has turned into a perfect "bun" in a couple of years. 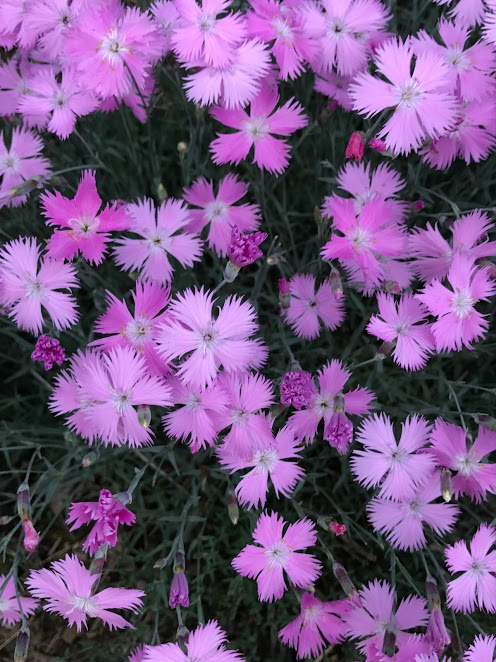 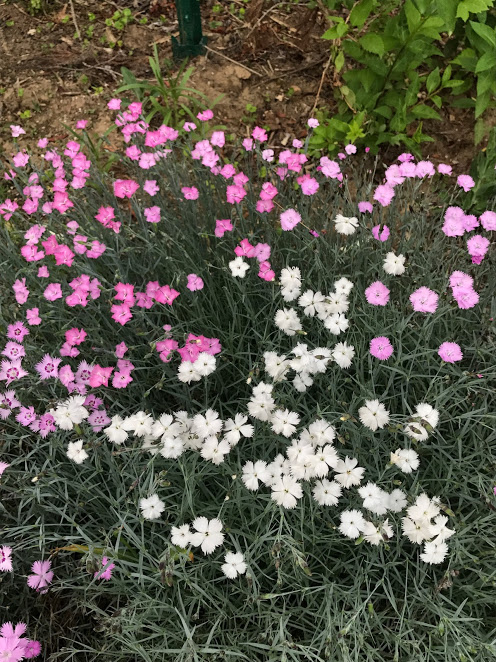 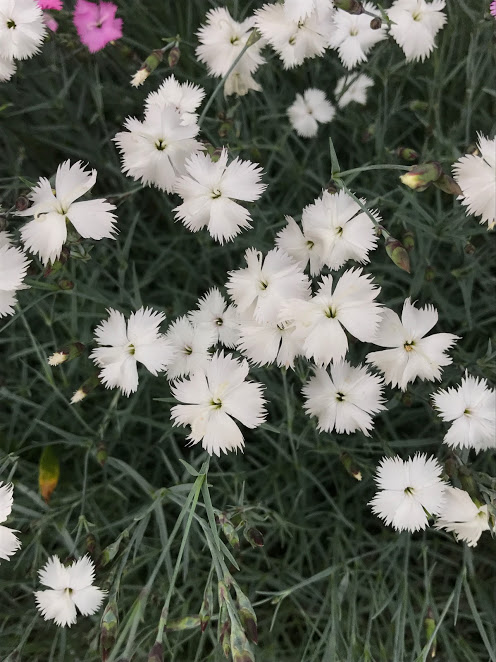 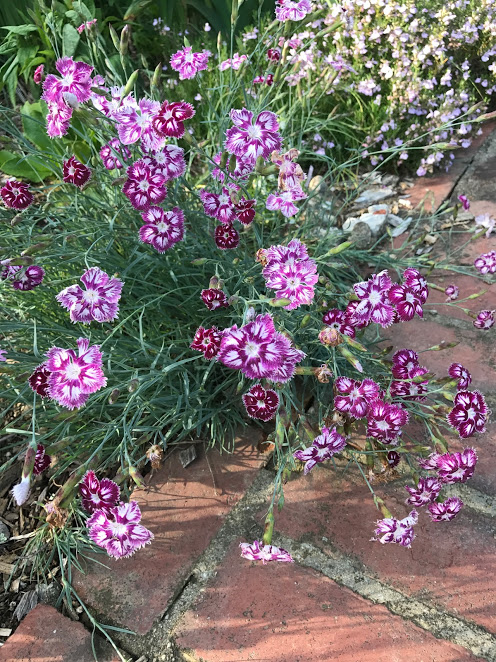 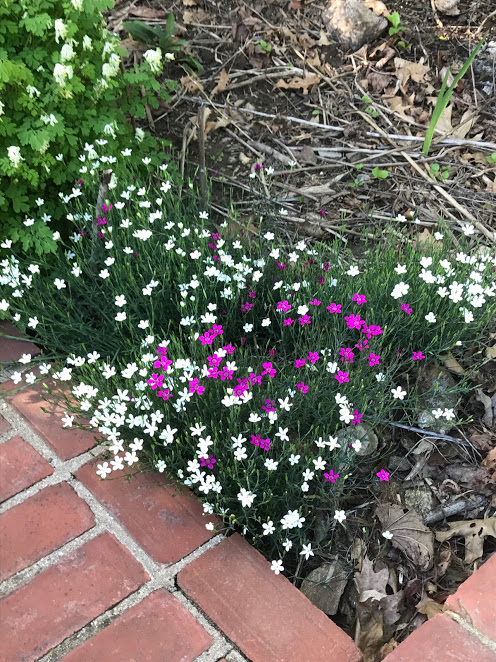 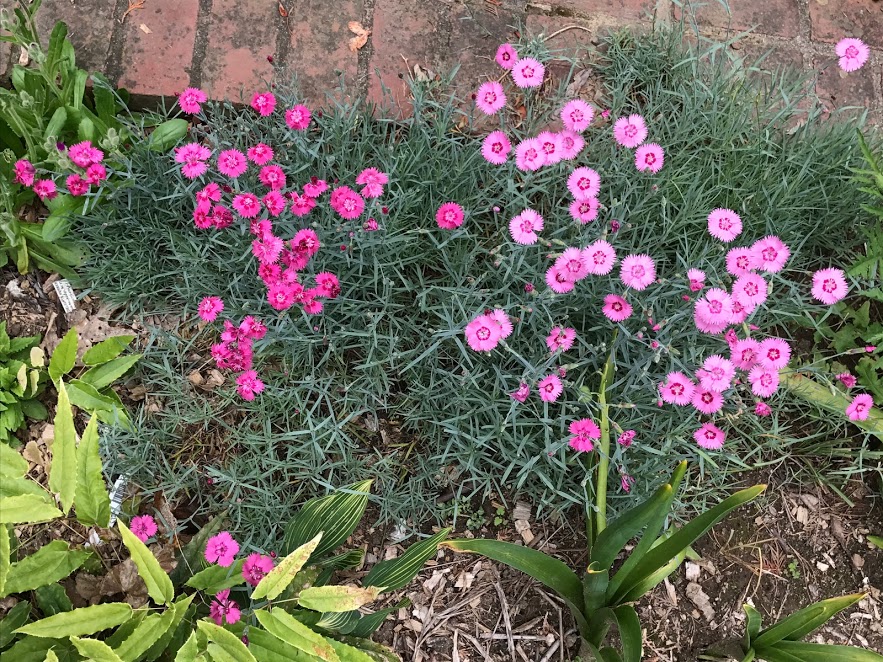 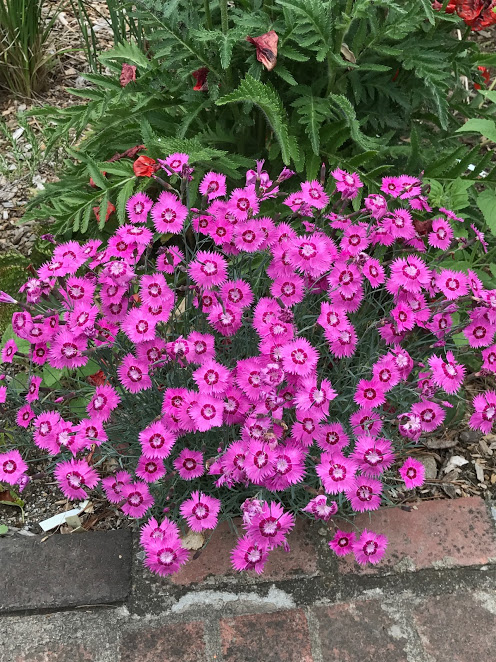 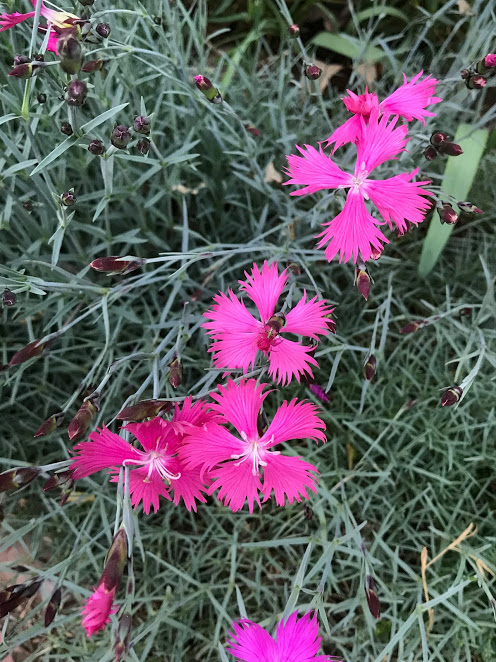 Its that time of year when each day brings new surprises.  Despite the often less than favorable rainy/cloudy weather this spring, the dianthus in my gardens have done well.  No doubt the mild winter helped, and also the generally cool spring temperatures tend to favor them.  Most of what I have, and there are many dianthus here, are grown from seed from the exchanges (NARGS, SRGC) and my own seeds from the ones I grew in the school garden some years ago.  A few linger on at school but the voles seriously culled their ranks during one of our snowier winters a few years ago. I also haven't been as diligent at weeding the school gardens as I was before we moved to this place where my gardens take up much more of my time than they did in our prior residence.  When one gardens on over half an acre (minus the footprint of the house and driveway, but counting in some of of the patios as there are quite a few things that really do well in the cracks between bricks or slate) it takes a lot of time and effort.
Many of the dianthus pictured here and others came from left over NARGS seeds which are redistributed to the local chapters after the two main rounds are done.  So few people these days seem to be willing to try and grow from seeds, and indeed many seeds can be challenging or take time to produce mature plants, but dianthus is not one of them.  Dianthus seeds germinate fast, and need no special conditions apart from reasonably mild temperatures, decent soil and moisture.  They grow quickly and often flower their first year, and certainly will do so their second year.  They do have certain demands, for one they must have good sun exposure, and also they need good drainage.  In the areas where I have planted a number of them I have amended the heavy soil we have with coarse sand ("road sand") which they seem to like.  They cross readily and a myriad of different flower colors and patterns emerge, as well as fringed petals on some.  They also smell wonderful, and if you get a particularly nice plant from seed, it can be propagated easily from cuttings.
Few pests bother them apart from herbivorous mammals.  Voles can be especially destructive during winter if there is a long period of snow cover as they munch through the cushions and line their trails with dianthus leaves.  Deer will sometimes bother them but most of mine are in the back where posts and mesh keep the deer out and in the front I use Liquid Fence every few weeks to repel the few deer that are in this area.  Dianthus also don't like a lot of organic matter near them so don't put mulch around them, they prefer gritty soil that is not too high in organic matter.
There are some other species that will flower later, among them D. amurensis with blue-lavender flowers and Dianthus taiwanensis (or a Taiwanese form of superbus) which I grew from seeds I collected in Taiwan.  The latter flowered profusely their first growing season, and all of them survived the winter in great shape, and are in bud right now.  I also have some cultivars from Santa Rosa Gardens which are more carnation like.  They tend not to form seeds and are a bit fussier than the seed grown singles.  In addition I grow the Chabaud carnations, they are easy from seed and flower their first year, and some usually survive winter, especially if it is mild.
Posted by geranios at 6:04 PM 1 comment: