Crotalaria, not your usual annuals 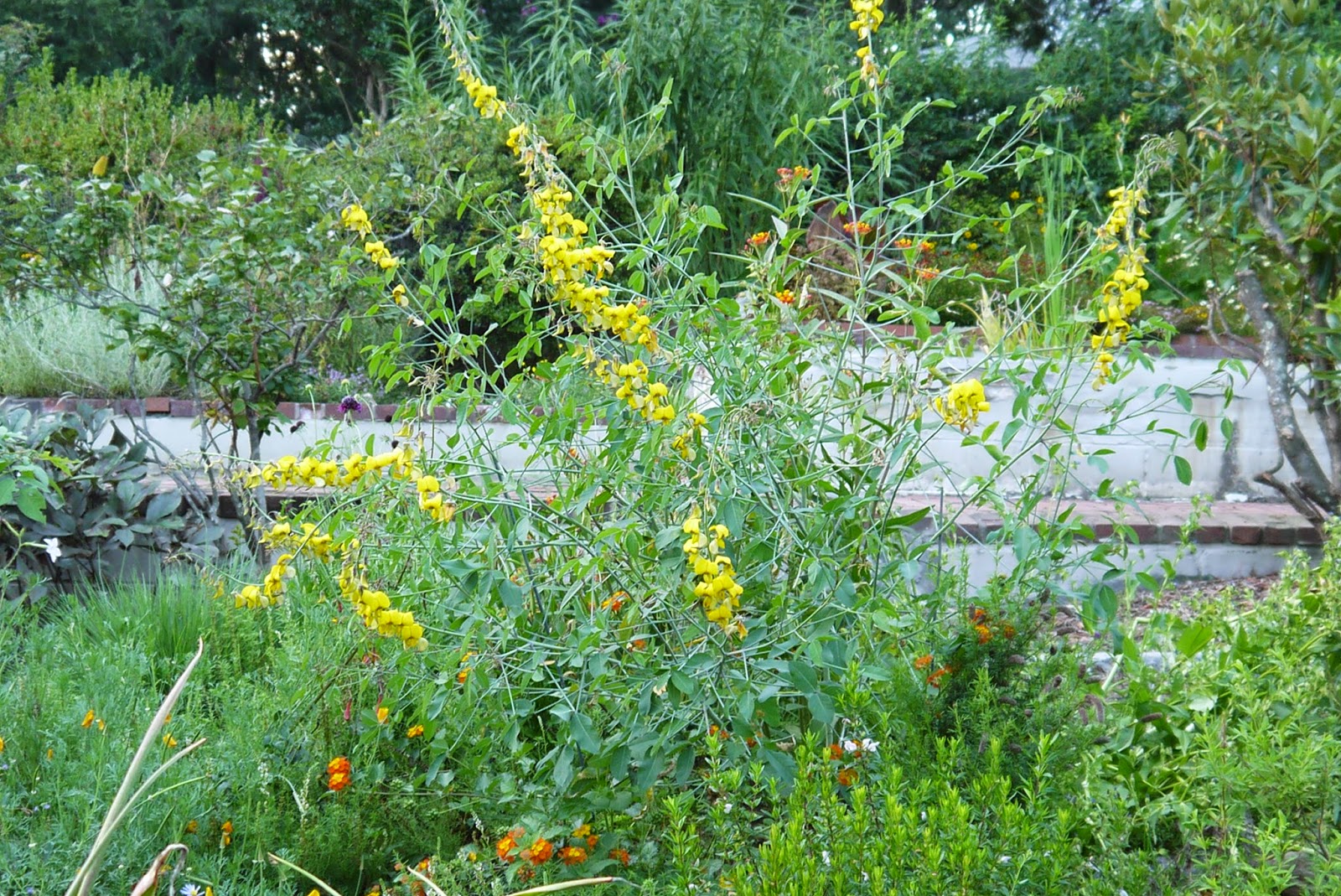 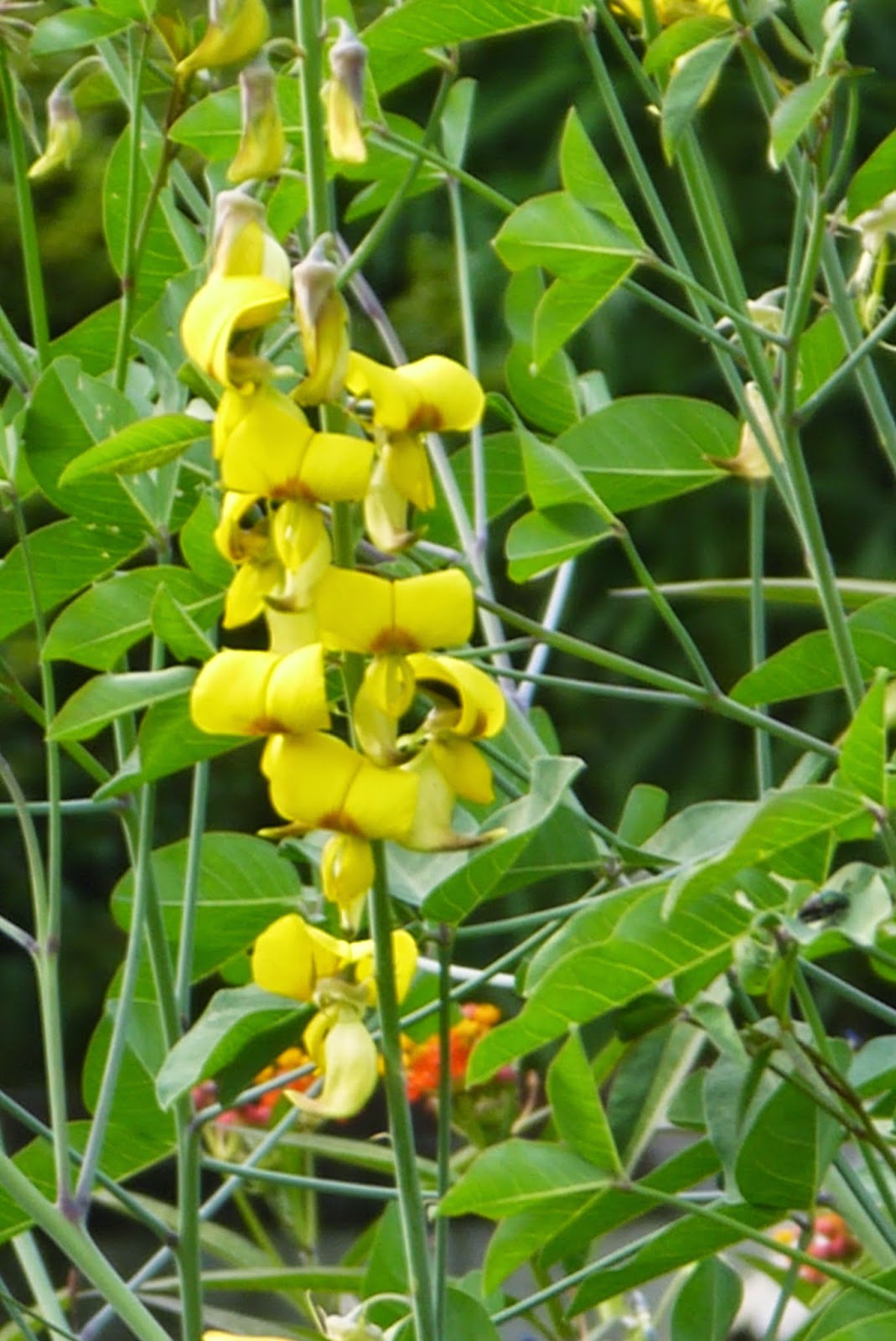 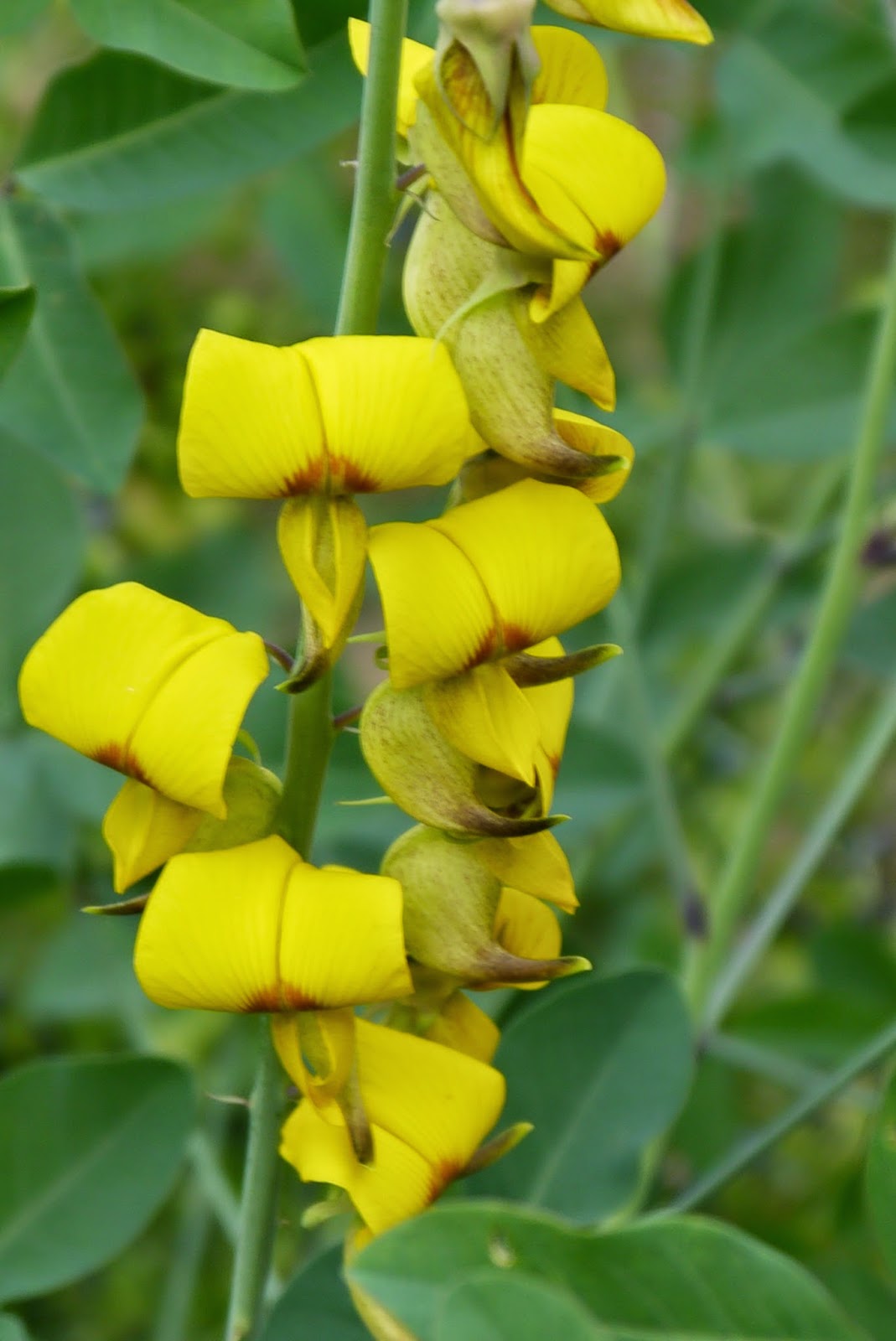 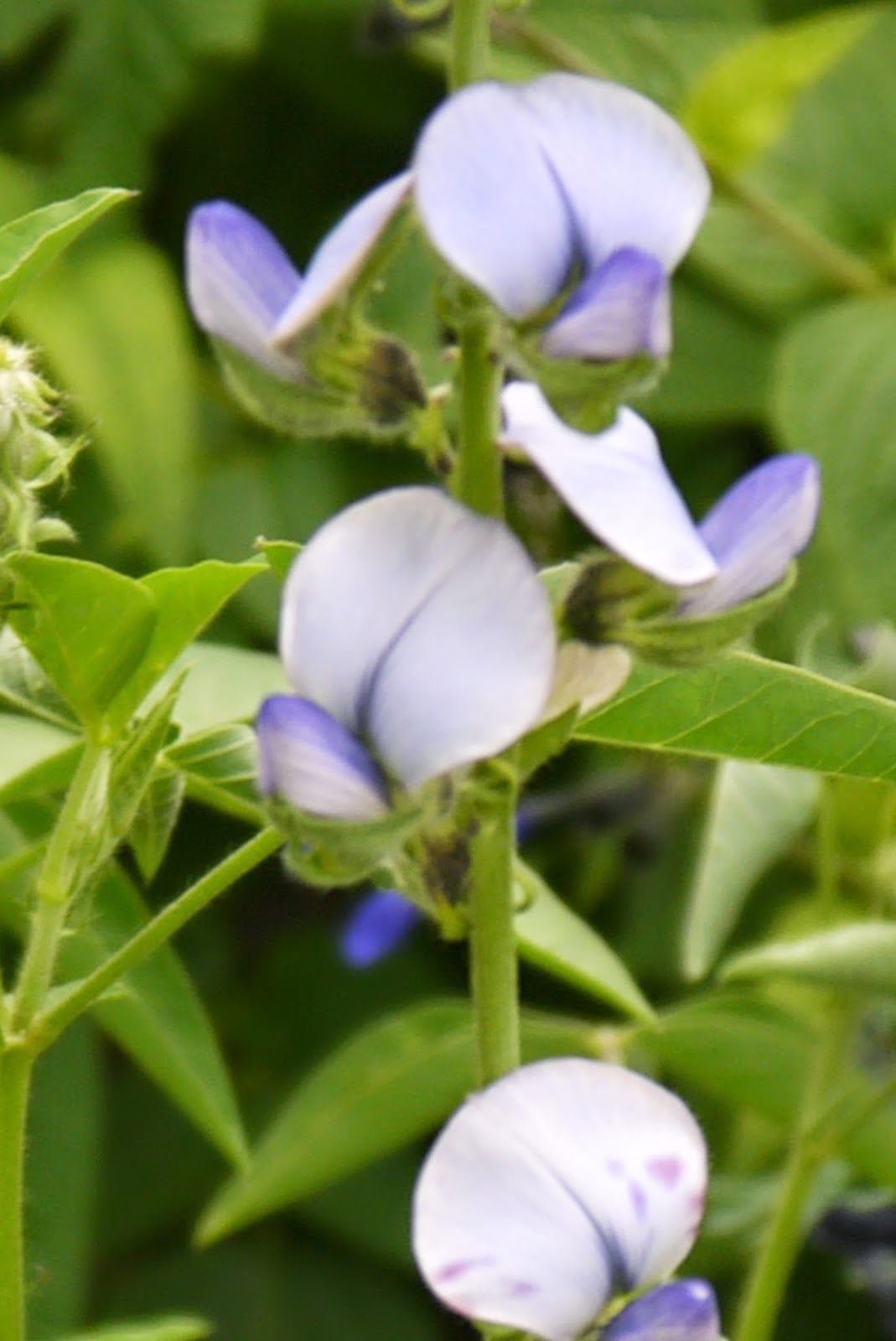 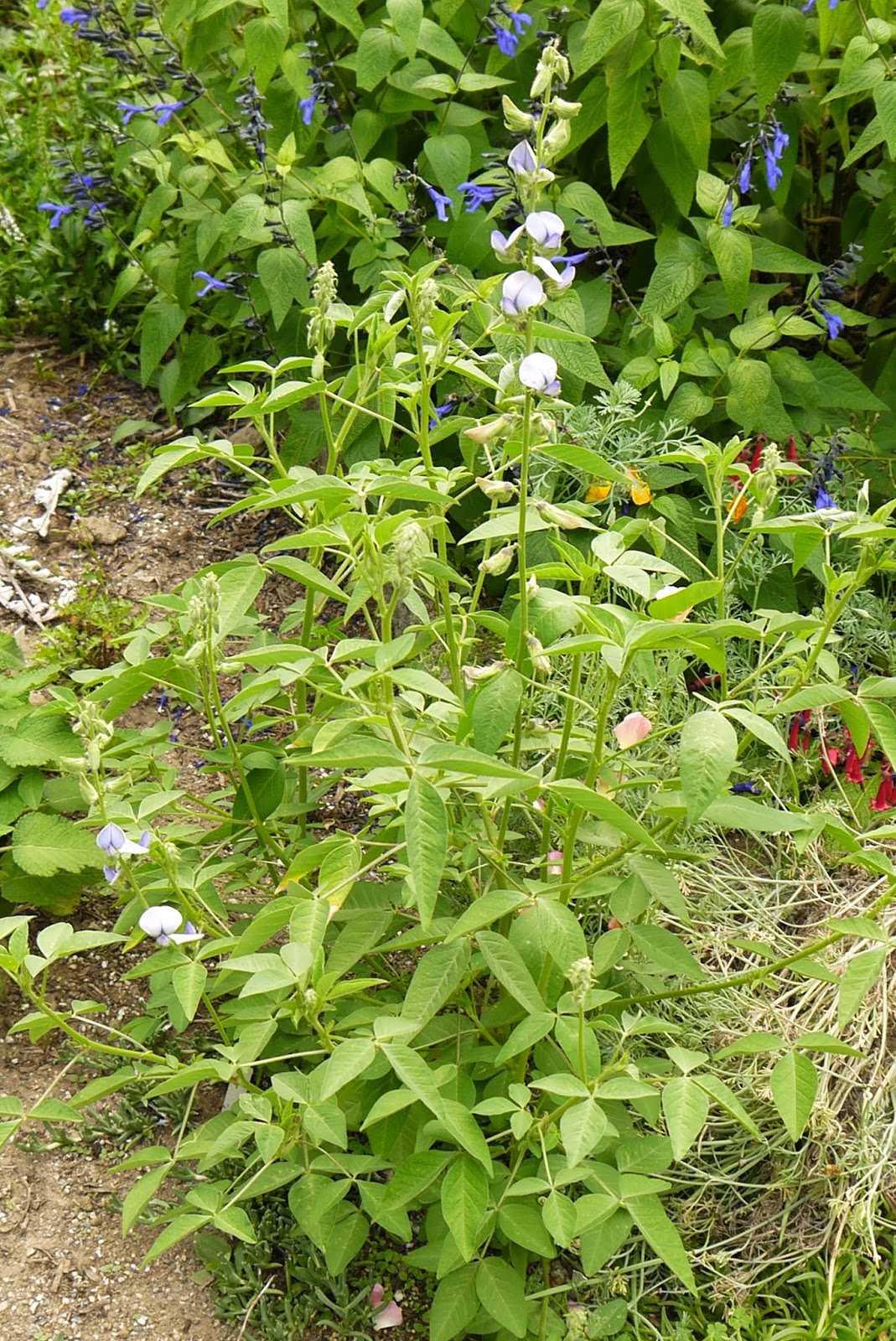 Crotalaria is a large genus with both annual and perennial species.  Most are concentrated in Africa though they are found elsewhere too.  This year I started several from seed but two got large enough to get out into the garden.  Unfortunately I lost the tag on the yellow species, it is an African one and I will have to grow out more seed from what I have to figure it out.  Another very unfortunate thing is that it is not self fertile (the only crotalaria I have run into so far with this annoying trait) so I did not get seed from it, nor was I able to propagate it from cuttings.  It has blue green glaucous leaves and gets quite robust, and bloomed all summer long right till frost.  Since I have several spp of crotalaria seeds, I can rule out a few names but will have to actually grow more out from what I can't eliminate as this species and make sure to get more than one plant started.  Perhaps I will send a photo to the supplier so I can get a good ID and more seed of it, I don't think I could have too much of such a nice flower.
The second species is one I collected many years ago in a cornfield in Malawi, where it grows as a weed.  It has lovely bluish flowers, not common among African crotalarias, nearly all of which are some shade of yellow.  I think it is C. polysperma.  It is easy to grow but only opens its flowers for several hours each day, but it does produce abundant seeds and is very self fertile.  So its no problem to propagate, this one plant made hundreds of seeds even though it was off to a late start due to me not getting the seed started earlier.
The seed pods of all crotalarias are known as rattleboxes because they actually do rattle when dry due to the inflated pod and numerous seeds inside. Like other legumes, the seeds benefit from being soaked and/or chipped and soaked to ensure that water gets through the thick seed coat.  This speeds germination, and they like full sun and warm to hot weather to do their best.  Some species bloom in winter, which is unfortunate as they would otherwise be good garden plants.  I collected seeds of some species in Malawi that are also nice plants but have the fault of winter blooming habits which precludes them from anything but greenhouse use in NY.
There are some other species I have grown earlier and need to restart from seed as well as some that are being maintained indoors as small plants because they didn't come up fast enough to get out in the garden in time.  They will have a head start next year so I should have some more of these intriguing African legumes to experience in my garden later this year.
Posted by geranios at 5:59 PM