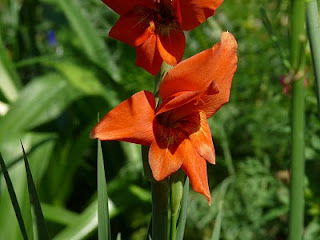 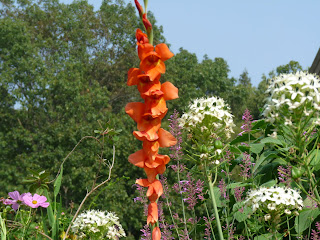 Playing bumblebee is one of a this gardeners' favorite pastimes, since by crossing different forms of a plant, interesting new hybrids can be created. Among a few genera that I like to play bumblebee with, the genus Gladiolus offers much potential for creating quite different kinds of plants than the typical hybrids usually seen in flower arrangements, and seemingly less often, in gardens. I crossed several typical hybrid glads with a form of G. dalenii (itself a very variable species) that I acquired years ago from South Africa (by now I have a handful of different dalenii forms), and also included in my mix of crosses the yellow flowered dalenii hybrid "Boone", and the rather graceful and prettily picoteed cultivar "Atom". I haven't kept track of what the parents of the hybrids I have grown out are, but the plant shown was especially nice. It was quite tall, rising above the flower heads of some nearby Ornithogalum saundersiae, and even sporting a additional shorter infloresence off the main one as well. Quite vigorous indeed for a first flowering! I love the orange-red color and yellow markings on the lower petals. It shows its dalenii heritage in the hooded top petal, which is characteristic of dalenii. I crossed another form of dalenii, one found commonly in the southern states of the USA (has brighter orange and yellow flowers than my South African form) onto it, along with some of its siblings (which tended to be more pink in color and not quite as tall), and, no doubt, it may have selfed as well. Copious amounts of seed were produced, and I can't wait to plant them and see what will result in two or three year's time. Meanwhile I will have to dig out the corm, if it is like its parents, it should have plenty of small cormlets alongside the main corm, a feature which should allow rapid increase in numbers of this lovely hybrid. It is possible that it is winter hardy, but I will not test that until I have enough progeny to spare for such a test.
Posted by geranios at 6:42 PM 4 comments: