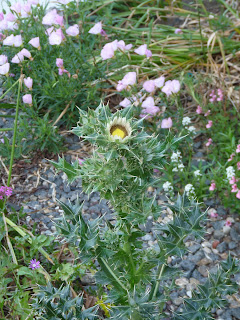 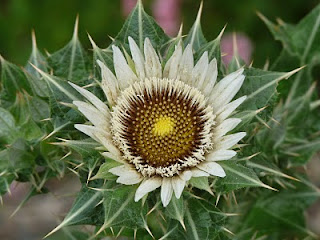 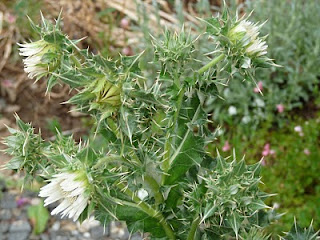 Another exquisite delight from the Drakensberg, Berkheya cirsiifolia bloomed in its second year from seed in my school garden. There were others last year in another part of the garden that were mistaken for weeds and pulled up by well intentioned, but not very plant saavy, landscapers the school contracts out work to. Now they know not to touch anything in my garden, I do a better job of weeding anyway. I hope the berkheya is not self sterile, as are so many Asteraceae, but in case it is, I will be starting others from seed later on which hopefully will flower next year. It has very attractive spiny foliage and nice white daisies, which tend to open flat in the sunshine but partially close when shaded. I have seed pots of other Berkheya species coming up, and soon two plants of B. radula will flower in the slope garden. The latter was overwintered indoors, unlike B, cirsiifolia, which appears to be totally hardy, and grew rapidly once I put them outdoors. They should have yellow daisies on a much less well armored plants.
Posted by geranios at 8:18 PM 1 comment: 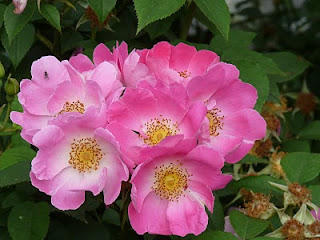 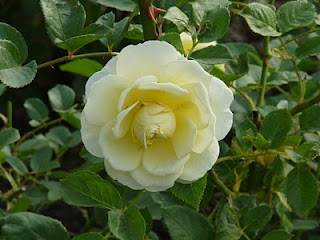 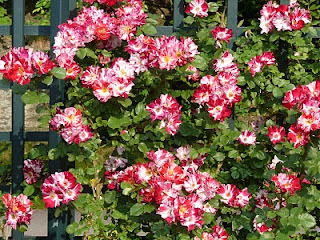 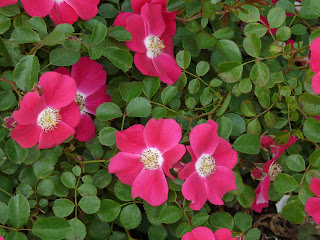 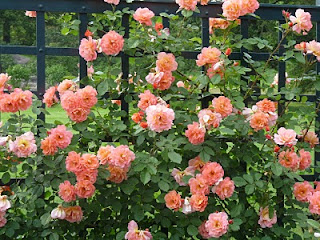 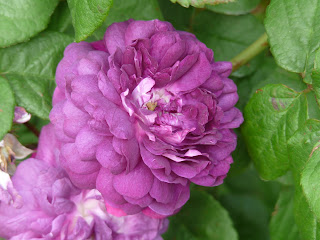 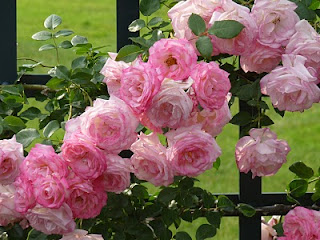 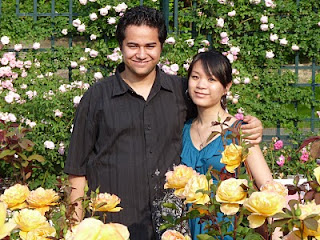 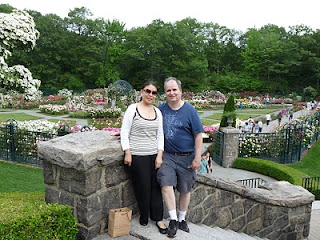 A few weeks ago, the roses at the New York Botanical Garden were at peak, and I went to see them with my wife Grace, Jonathan (former student, now University of Vermont graduate and fellow plant/animal geek) and Donna. We could have hardly picked a better day, though the afternoon sun was hot and accounts for my squinting in one of the photos. It was a perfect spring for the roses, not too stormy once they began growing, rather dry, and on the warm side with cool nights. I'm no expert on roses, and I didn't take notes, so I can only identify a few of the ones pictured. The single flowered pink rose with a large cluster of blooms is "Complicata", which makes a nice looking bush when in full bloom. The other single with a white center is "Cherry Pie" which has good foliage to offset the bright blooms. The weird blue purple one is "Veilchenblau", and climber with very unique colored flowers, nothing else I've seen resembles it. The last one that I can identify is "Fourth of July" which has striped red and white flowers which really stand out. There were endless numbers of other lovely roses there, with climbers, old roses, English roses, and species on the periphery and mostly tea and floribunda types in the central area. Many are fragrant, but we were a bit late to get the best of that, since rose fragrance is strongest in the morning. It was an especially good year for the old roses, since they suffer the worst in bad weather, the flowers frequently "balling" and getting destroyed by molds in really rainy weather. The English or Austin roses are a great improvment, in that they have the old rose flower form but tend to be more vigorous, everblooming (rather than one massive spring display as with many old roses), and more weather resistant.
It was a lovely day, but I should bring a notebook in the future so I can better remember what I photographed.

Posted by geranios at 7:33 PM No comments: 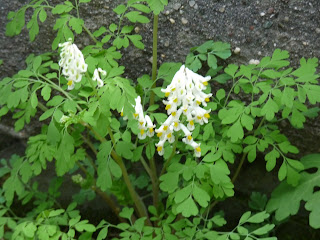 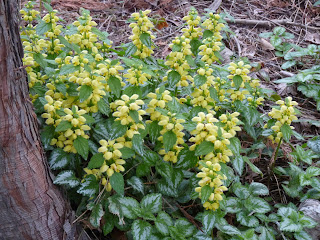 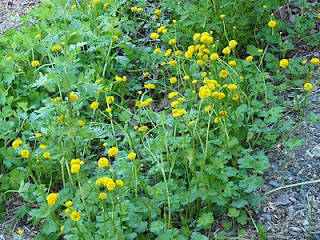 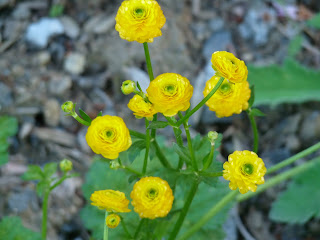 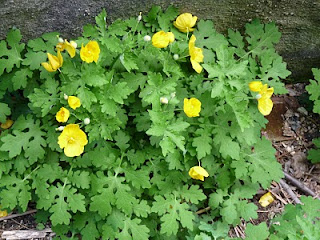 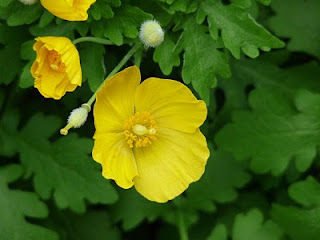 There are some plants that are just too beautiful to not grow, but they need to be watched, for they would conquer the world, if allowed. Stylophorum diphyllum is a native plant which seeds around freely, very freely indeed. The sumptious yellow poppy like flowers are gorgeous, though, and the attractively cut leaves are not without merit either. It is either too happy or not happy at all, mine seems to have found a position to its liking, in rich soil in a shaded position between a yew and the neighbor's wall. It was not so happy in drier soil with lots of competition where I originally planted it.
Corydalis ochroleuca is another prolific self seeder, favoring partially shaded areas, with a particular ability to grow in crevices such as cracks in stone walls. Like the stylophorum, seeds are ejected so they travel for a distance from the parent plant. They germinate en masse the following spring, and quickly grow to flowering size. This plant flowers constantly, from early spring till early winter, with peaks during cool weather. Like stylophorum, exess seedlings are easy to remove but somewhat touchy about being transplanted.
Lamium galeobdolon is a wonderful groundcover for difficult dry shady places with tree root issues. It has beautifully patterned foliage which persists in winter, and for a short time in midspring, lovely masses of soft yellow flowers complete a beautiful picture. So what's not to like--well, it does send out rapidly growing runners that root at each leaf node, and are not particularly easy to pull up once they have a good foothold. Note that the supposed cultiver "Herman's Pride" is a totally different plant, a clumping perennial rather than a running groundcover, and is well behaved--I can't believe it is the same species (and don't, actually).
Of similar disposition to the normal form of L. galeobdolon is Ranunculus repens "flore pleno", the double creeping buttercup. I got my start decades ago from the Brooklyn Botanic Garden when I worked there one summer as an urban gardening intern, and its been with me ever since. I have a particular fondness for double buttercups, and grow a few other kinds, but this one is the only one that could be called rambunctious, for it is an aggressive spreader, much in the same manner as strawberry plants are. It blooms once in mid to late spring over a few weeks, then promptly sends out stolons in all directions. Periodically I go on a rampage to get rid of most of it, but the few plants left behind always repopulate their allocated area quickly, and I am thankful when the perfectly formed double flowers appear each spring. I recently set some loose in the slope garden at school, where they formed a nice mass of bloom as seen in the pic. No doubt I will be snipping off stolons all summer long.
All of these make fine garden plants, but with the caveat that they must be actively managed, or they will run over lesser neighbors. On the other hand, they tend to be great plants for tough sites where little else will grow, except, perhaps, for the stylophorum, which does like good "forest floor" type soil and decent moisture.
Posted by geranios at 5:00 PM No comments: