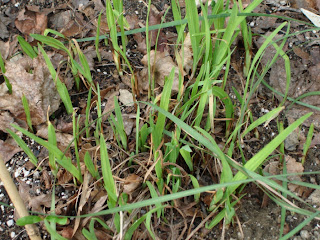 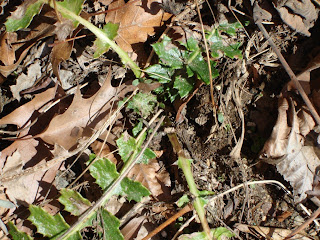 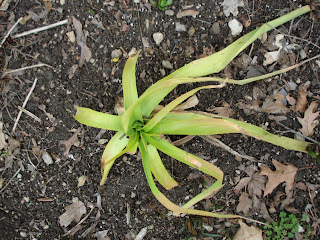 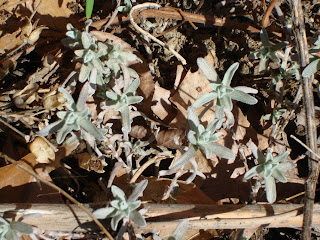 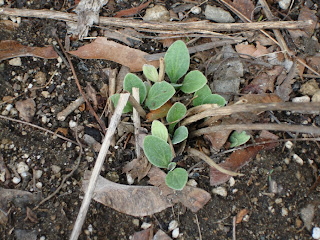 Its spring at last, and after a rather mild winter, many South African plants in both my home and school gardens have come through beautifully. Leaves remain from last season or emerge for this season, signaling that a good growing year lies ahead. Because I never know exactly where the photos actually end up when my postings are published, I'll describe the plants pictured so that the reader knows which ones they are. With a bent flower stalk from last year hovering over the grey green spoon shaped newly emerging foliage, Haplocarphya scaposa enters its second year in my home garden. This fabulous plant of the South African grasslands will produce its large yellow daisies on long stalks above a rosette of foliage during its first year from seed. It resembles a yellow gerbera but with much better foliage, and it will bloom all summer long. As with many Asteraceae, more than one clone is needed to set viable seed, so I have several plants growing in one of my home gardens. Small grey leaves on a branching young plant of Helichrysum spendidum, pictured with dead oak leaves underneath, show that it remained evergreen (evergray?) over the winter in my school garden. Barely a foot across right now, I know from having grown it years ago at the New York Botanic Garden that it will become a real beast this year, potentially nearing a yard in width and nearly as much in height. It will cover itself with numerous small bright yellow "stawflowers" in late summer. The yellow green vegetative "octopus" is Kniphofia northiae, a magnificent species of "red hot poker" lily from the high Drakensberg. Its overwintered for at least three years at home, growing larger each year but not yet near its full size. Perhaps a more sunny area would spur it to grow faster, but in time it will bloom, though the wide, spiralling and sprawling foliage is entertaining enough in the garden. It is one of many kniphofias I am growing that are hardy here. In bad winters the foliage almost dies back, in good winters like this past one, the foliage remains in good condition right into the new growing season. With pinnately cut leaves resembling a thistle, and like the latter a member of the Asteraceae, the genus Berkheya contains several winter hardy large daisy flowered species from the high mountains of South Africa. Other species grow throughout the country as well. I grew this one from seed, I think it is B. multijuga, which will have big yellow flowers over prickly foliage. If I am wrong, maybe it is B. cirsiifolia, which would have simliar, but white, flowers. Berkheya purpurea is a lovely light purple one that may be short lived but will flower its first year from seed started early. Grassy foliage emerging from a vigorously spreading patch marks Crocosmia "Distant Planet" an orange flowered selection from Ellen Hornig's amazing gardens and nursery (Seneca Hill Perennials) in frigid upstate Oswego, New York. This plant is indeed "unstoppable" as Ellen's catalogue description notes, pushing its leaves up through the fallen leaf mulch I put over everything even before winter is over. I see that Crocosmia aurea has also survived this winter along with Crocosmia "Lucifer" offspring from seeds I started last year, but neither is as quick to get up and go as "Distant Planet".
Some of the other South Africans that are growing right now in my gardens include Leucosidea sericea, one of the few winter hardy woody South African plants, Kniphofia porphyrantha, K. hirsuta, K. "pumila" from Plant Delights Nursery (I suspect that it is a hybrid rather than a species) and other spp and hybrids, Diascia cordata, Wahlenbergia rivularis, Amaryllis belladona (bulbs planted late against the wall at school, a protected location), Salvia disermas, and Artemesia afra. Others remain dormant, but that I know will reappear in time include Albuca shawii, Gladiolus papilio, Galtonia candicans, Eucomis bicolor, and Tritonia disticha. Still others resow regularly as self sowing annuals, among these are a species of Nemesia with white flowers (or various shades of pink in the hybrid swarm that formed when blue N. caerulea was planted nearby) and Senecio inaequidens. I am growing seed of many more South African taxa to try out in the garden this year, so it will be an exciting gardening season.
Posted by geranios at 6:03 AM 2 comments: