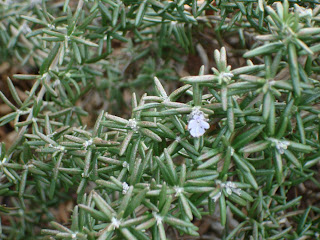 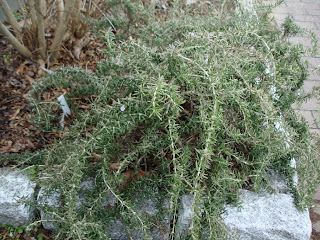 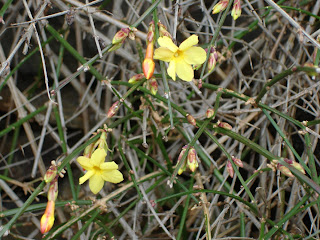 These pics of Jasminum nudiflorum and Rosmarinus " Lockwood de Forest" were taken outside on January 12 at Wave Hill in the Bronx. Flowers are hard to come by at this time of year, and I was especially suprised to see the flower on the rosemary. Even more odd was to see that this trailing form of rosemary was doing well outdoors, so far. Rosemary cultivars vary in their cold tolerance, and even the toughest are marginal in our area. Generally the trailing varieties are considered less hardy than some of the upright growing varieties, but "Lockwood de Forest" seemed to be fine, despite some drops into the teens in late December. Perhaps more experimentation in Zone 6/upper 7 is warranted with the trailing rosemary varieties.
Posted by geranios at 6:59 PM 1 comment: 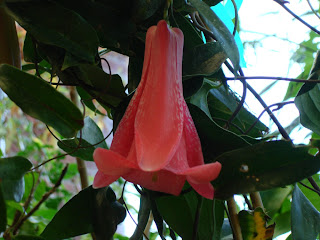 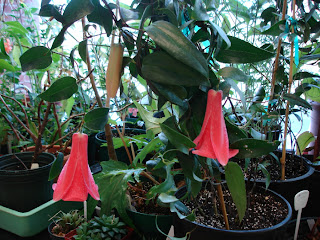 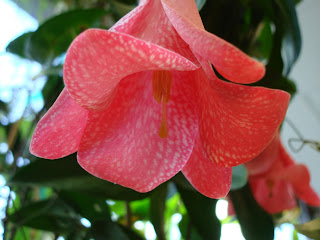 This is one of those plants that is coveted by many, but rarely found outside of specialist collections, and even more rarely in areas without a climate suitable for its growth outdoors. It is the national flower of Chile, and is adapted for growing in cool, moist areas with shade--that would be coastal California and Oregon in the USA (with extra water as needed in summer). I was happy to get a well grown small plant from a mailorder nursery for about 12 dollars, but when I went to CA last August, I found some well developed, flowering sized, similarly priced plants at a nursery that specializes in rhododendrons. They had some slug damage, but hey, at twelve dollars for a mature plant, who is going to complain about a few dings! I immediately snapped up two plants, and brought them back to NY. I barerooted them the day of departure with a hose, and packed the roots into plastic bags with wet paper towels so they could stay moist. This seems to have suited the plants well, as they both sent up new growth (and flowers on one of them) since they were repotted in NY. I have read info on the web that says never to bareroot them or they will be severely checked for a year or so, but maybe they are referring to a situation where the roots also dry out for some time.
One plant flowered outside in September from buds already set in CA, then it graced my classroom with three more lovely flowers this month. Each flower lasts quite a while, about two weeks or so. The texture is quite substantial, almost like they are made of wax. I have been unable to set seed on this plant, so I suspect I need both clones to flower at the same time to get seed, perhaps lapageria is self sterile?
I am growing both plants in a standard mix (Miracle gro for containers) with added perlite and peat moss to provide a well aerated, acidic growing medium for them. They grow well in my north classroom windows with added fluorescent lights at moderate temperatures. Lapagerias are reputed to hate hot and humid weather, but I suspect that they will do fine outdoors in summer here, if provided with shade to keep the roots cool and prevent sunburn.
I've tried to grow lapageria from seed but have not had success yet. It appears the seed must be very fresh to germinate well. This might be one reason why is is rather scarce, though it is one of the most strikingly beautiful flowering vines I have ever seen.
Posted by geranios at 6:31 PM 2 comments: