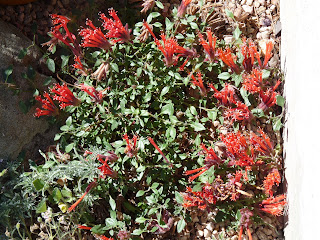 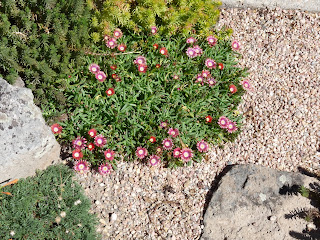 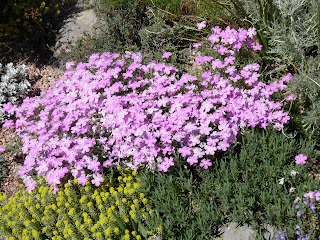 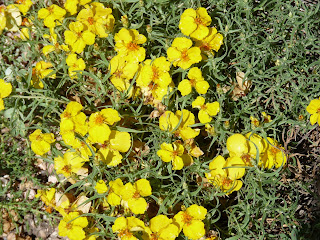 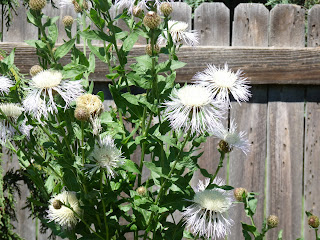 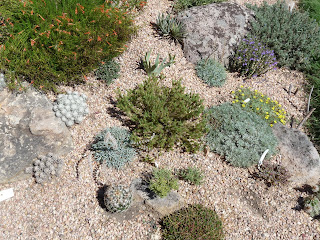 Any true plantsman or woman will find a chance to learn more about gardening and plants in places other than where they live an exciting adventure.  I got just such an opportunity to go to Denver in early August and stay for a little over a week as a guest of Panayoti Kelaidis, world reknowned horticulturalist and plant explorer.  I gave two talks, one on Pelargoniums and another on South African Plants for American Gardens, to the local chapters of the North American Rock Garden Society and the Cactus and Succulent Society of America, and toured several outstanding gardens, hiked up flower filled mountains, and got to hang out at the Denver Botanic Garden and meet many of the enthusiastic and knowledgable horticulturalists that make it a must visit place for anyone going to Denver. I found it so thrilling to interact with like minded plant lovers, to "shop talk" about our respective gardening experiences and to see and experience gardens and plants in a climate that can be downright bizarre at times from my eastern American perspective. I learned enough and took enough photos to provide material for the several blog posts I intend to produce as a result of my amazing experiences in Denver.
For starters, the photos above show some real horticultural treats from the incredible home gardens of Mike Kintgen, who is in charge of the justly famous rock garden at the DBG.  We arrived one morning to view his gardens, and despite the daytime heat and the fact that Denver gardens are generally not at their prime in August (like many other places, may/June tends to be a more floriferous time), there was no lack of really nice things to see.  A vigorous Monardella macrantha with screaming red flowers by itself would have sufficed to make the visit worth it, as this rare southern California native creates a spectacular mat of brilliant flowers which beckon hummingbirds to come closer to the ground that they probably would prefer. It is one of many plants that no one suspected should be able to handle Denver's cold and very volatile winter weather, but evidently it does so just fine.  It also grows in the DBG rock garden and even in one of the planters along a walkway in front of the greenhouses, as well as in some other gardens in the area. Next one of the delospermas that seem to love Denver's high light intensity, low humidity, and generally drier winters than what we experience in the eastern states.  It is Delosperma dyeri "Red Mountain".  Soon to be released (by Plant Select, a partnership of DBG and local nurseries) as "Firespinner" is a somewhat similar species that blooms earlier and it will be a wonderful addition to the growing list of hardy mesembs or "ice plants" in the USA. If you see it get it! It is a selection of a species from a very cold area of the eastern Cape in South Africa, in fact I understand that it will not flower in places like Cape Town where the winters aren't cold enough. It most closely resemble D. dyeri, but the foliage is different and the plant grows into a larger mat. Next, a western phlox, P. nana, blooms as floriferously as our eastern mat forming ones do much earlier in the season. The yellow mat forming Zinnia grandiflora was everywhere in better Denver gardens, and so different than the commonly seen annual ones.  It is a perennial blooming machine, and is very resistant to the highly localized but insane hail storms that can randomly devastate broad leaved taller plants in the area. Gardeners worldwide obsess about weather, but I learned that no place has more changable weather than Denver.  The hail storm stories I heard from several people were legendary. Apparently its a matter of unluck as to when one strikes as they cover relatively small areas and generally some years go by between really bad ones.  But when a bad one hits, nurseries can be devastated to the point of going out of business (unless they have great insurance), gardens are denuded of foliage and flowers on many taller plants while some smaller ones are just pulverized into mush, woody plants are injured and killed from foliar loss and even bark stripping, and houses end up with roof tiles stripped as well.  Still many native plants like this zinnia are adapted to cope with such events, and with their narrow leaves and ability to bend rather than oppose the hail, they suffer less damage than broad leaved plants like hostas or annual zinnias would.
Centaurea rothrockii (closely related to and perhaps a variant of or conspecific with C. americana) is another wildflower native to certain areas of the southwest, but the only one I saw in the local gardens was the superb specimen in Mike's garden.  It was huge, over four feet tall, with enormous white flowers.  Apparently it grows as a biennial or short lived perennial, but when it flowers it is absolutely majestic.
All over the Denver area, and in every garden I visited, foliage in various shades of grey, silver, and blue green accentuate the visual aspects of the landscape. Silvery and grey leaved plants seem to love the abundant sunshine and they contibute much interest to gardens.  Several cacti, such as various opuntias, pediocactus, echinocereus, and others are winter hardy and do very well in Denver, where excess winter moisture is less of a threat than in the eastern states.  In the last photo such plants combine beautifully in Mike's home rock garden.