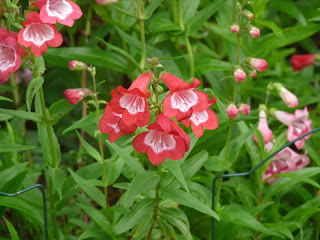 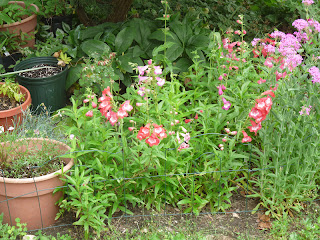 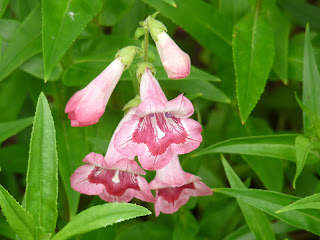 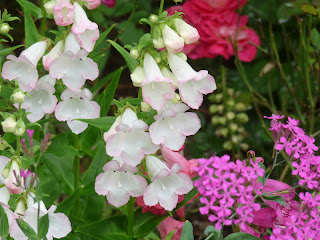 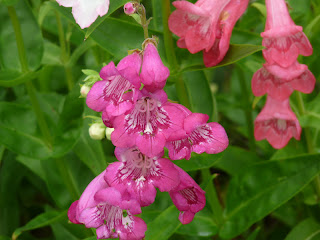 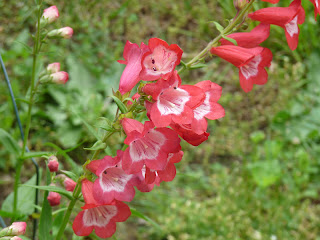 Penstemons are pretty much exclusively found in North America, mainly in the western part. Many of the western ones are challenging to grow in the humid and rainy east, but some of the garden strains are easier.  Penstemon gloxinioides "Sensation" is a seed mix which produces a wide variety of colorful plants. P. gloxinioides is a Mexican species (and may be synonymous with P hartwegii, there seems to be some confusion in that I see these "border" penstemons under either name) and thus is not as cold hardy as most of its US brethren, but they grow fast from seed and can be grown as annuals if started early.  I remember growing these years ago when I was a kid.  I don't see them growing in gardens around here, so I had to search to get seed, and as is often the case, Chilterns in the UK was my source. They usually take a beating during winter in NY, often dying but sometimes respouting from the base, but in this extraordinary year, they sailed through the very mild winter with practically no damage.  This allowed them to begin blooming in May, and they are still blooming off and on.  I'm sure if I were to deadhead them they would make even more flowers but I want to get my own seed to try in the future.  Many new buds are forming so I expect another big wave of bloom in a few weeks time in August.
There are named cultivars of this that are propagated from cutting, I did get a couple of these from Forest Farm and am curious to see how they compare to the seed grown plants. Right now neither of the two plants from FF is in bloom, but I anticipate they will do so in about a month or so.
Posted by geranios at 10:19 AM No comments:

Diverse Dianthus in the Garden

Dianthus is a rather large genus with lots of attractive species (see the recent post on (mostly) species on Panayoti's blog:  http://prairiebreak.blogspot.com/2012/07/gods-flowers-underappreciated-pinks.htm) and innumerable hybrids.  The genus ranges across Eurasia and, unbeknownst to many, has a decent number of South African representatives as well. In my school garden they do well in the sloped garden, as they prefer good drainage and plenty of sun.  Some plants I purchased from various mailorder nurseries but most of them are seed grown, either from NARGS seed, seeds from the UK, or seeds of my original plants.  Many of the ones shown above grew from excess seed I cast out onto the slope a couple of years ago.  Most dianthus cvs are prolific seed producers so there is plenty of seed to experiment with (and they will resow around the parent plants if allowed). Its also good to keep new ones coming along as the individual plants can be shortlived perennials, especially in a bad year with excessive rains and heat at the same time.  Some are very fragrant. Should you desire, favored clones can be propagated quite readily from stem cuttings.  Most of them bloom en mass in mid to late May here in NY, but many will keep producing a few flowers here and there for the rest of the growing season.
The first two photos are cultivars of Dianthus deltoides, these form low mats of deep green minute foliage and can spread slowly. Apparently they have naturalized in some places in the US, but this is not a scary invasive species at all.  The seeds are smaller than the hybrid dianthus and they flower mostly in spring but will make more flowers later on, especially if deadheaded.  The remaining photos are of Dianthus hybrids, probably/mainly of the x allwoodii type.  They have several species in this bloodline and this complex gene makeup results in a very varied group of plants.  Leaves can be varying degrees of blue green to grey green to simply green and the flowers range from white to red, singles to doubles, and come in all kinds of shapes and color patterns.
Seed is both easy to collect and easy to start.  Germination is straightforward, no cold period needed, and some plants may produce a few flowers their first year if started early.  Once you have a colony of them going, its easy to collect seed and even broadcast it to get more plants.
Posted by geranios at 5:32 AM No comments:


I've written before about dandelions, and there are lots of well behaved, picky even, members of this genus for discriminating gardeners to play with.  Taraxacum pseudoroseum is becoming better established in cultivation thanks to the NARGS seedlist here in the USA and the seedlists of the AGS and SRGS in the UK.  Its the only pink, or at least pinkish, dandelion I have come across so far.  It is nearly impossible to distinguish from T. officinale, the ubiquitous lawn weed, in foliage so one has to remember where it is planted so it does not get weeded out.  T. albidum is a bit more course growing, especially if not in full sun, but it is also remarkably similar to its weedy cousin, save for the white flowers. Both T. pseudoroseum and T. albidum produce plentiful seed, but neither self sows very strongly in my gardens.  If you need more plants, they are easy to start from seeds in pots to be planted outdoors in spring.  T. faeroense, also known as T. rubrifolium, comes from the Faeroe Islands and may be endemic to there from what I have been able to find out.  My seed came from Plant World Seeds in the UK, and I really love the adpressed rosettes of dark purple foliage which stay purple even in warm weather. The foliage provides a nice foil for the bright yellow early spring flowers, and this plant could never become a weed as it is so small and does not make numerous seedheads.  I think it would look better against white gravel as opposed to dark soil, this would show the leaves better.  T. sp grey leaf is something I got from one of the Czech seed collectors, I think it comes from Turkey and it is a very shy bloomer.  The distinctive grey leaves appear very early and may die off in late summer and the flowers, when they do appear, are light yellow.  It is a rather finicky plant, disliking competition and needing a well drained sunny site.
Cicerbita plumieri also came from Plant World Seeds as Lactuca plumieri.  It is native to Europe and is basically a blue flowering tall perennial lettuce.  One plant has bloomed so far, and it is self fertile, already yielding many more seeds than what I received in the original packet.  It looks like it will bloom for several more weeks as new buds mature.  I rather like it, and I understand that it can get taller still than my three to four foot plants in the slope garden at school in unamended rocky soil.
Posted by geranios at 4:00 PM 1 comment:

It has been an outstanding season thus far for the school garden, by now the endless days of May rains have stopped and become more normal in frequency.  The flowers above are all blooming in June, except for Gerbera ambigua, which bloomed in May.  This is the white form of the species, I collected both white and yellow forms many years ago in SA, and forgot to dig up the 2 plants of I had in the garden last fall. They both survived but only one bloomed, so no fresh seed for this year since gerberas are self infertile.  In my home garden I had excellent winter survival of all three hybrid  gerberas I planted, though I admit covering each of them with a large pot filled with soil when temps dropped into the teens for the coldest part of the winter.  The G. ambigua enjoyed no such protection, and came though just fine, though I would not expect them to be hardy through our worst winters without protection of some sort.
This has also been a stellar year for diascias, D. rigescens is absolutely spectacular right now.  Even though it makes a perfectly good annual from seeds started early indoors, it is even better after it survives a winter. The plants are so laden with flowers that they have bent down from the weight, but the flower spikes continue to grow upwards anyway. D. fetacaniensis "African Queen" is a more subtle plant, the plants grown last year from seed from Chilterns have formed nice mats of tiny leaves with loads of delicate flowers hovering just above the foliage.  D. anastrepta from Silverhill is similar, but with glossier leaves and a distinctive yellow spot in the flower.  I do hope they offer seed of it again sometime, as I have only one plant and it will not set seed on its own (though perhaps it might hybridize with the others, the results could be quite interesting).
Senecios are wonderful daisies, and South Africa has several nice purple flowered ones in addition to the expected yellow sorts. S. polyodon is reliable even in harsh winter years, and produces myriads of small purple flowers well above the rosettes of foliage.  Individual plants live a few years, but it is always good to have some coming along from seed (they will self sow in favorable conditions) because they don't last forever.  Senecio macrocephalus is a shorter plant with much broader leaves in tight rosettes.  The individual flowers are much larger than S. polyodon and it starts blooming earlier.  Many seeds are produced by this plant and it will self sow and germinate the same season if rainfall is sufficient.
Helichrysum splendidum has nice linear grey foliage, and is a vigorous plant.  It sprawls so it needs to occupy some space, and in good years where winter dieback is not severe it produces many clusters of small yellow strawflowers.  I am expecting good seed set this year as several different clones of it are blooming right now.
Berkheya is a cool genus utterly unlike anything in the northern hemisphere that I am aware of, I call them thistle daisies.  An apt description as they are often prickly but bear large daisy type flowers. Most are yellow, but B. purpurea is an unusual shade of blue purple.  It is recently becoming established in cultivation in the US (and in the UK) and is proving winter hardy.  My small colony of them is increasing from self sown seeds that came up this spring from what seeds I missed harvesting last year.  It will bloom the first year if started early, but will do so much earlier in the season once it has gone through a winter.  B. macrocephala is a more typical yellow flowered sort, but is not as prickly as its breathern.  One of about 4 plants is blooming for the first time this June, it is hard to see the white felted leaf bottoms of the plant as its flowers rise up to mingle with the numerous corn poppies in bloom at the same time.
Kniphofia northiae is worth growing for it foliage alone, but this year three plants have flowered, all at different times with no overlap.  The first one that flowered was one of the ones by the wall, I am now harvesting the numerous seeds it produced. The second one flowered when we were having the rainy spell, it did not set seed.  This third plant, which like the second is in the unprotected slope garden, is about to bloom so it should go into July.  This species is easy from seed and I have enjoyed watching the enormous starfish like rosettes get bigger and bolder each year, and now am finally enjoying their flowers as well.
Posted by geranios at 6:05 AM 1 comment: