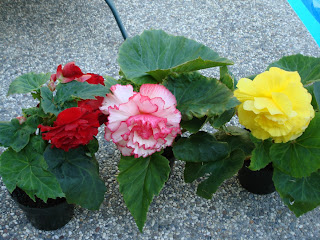 Here are three tuberous begonias that I purchased from Half Moon Bay Nursery (a must visit place in you are in the San Francisco area) on my recent trip to California. Their plants appear to be seed grown, but oh my--what a difference from the "Non-Stop" seed grown series commonly available here in the East. Some of these had humongous flowers, literally dinnerplate sized! With help from my wife, I selected three of the best from among a large number of plants at the nursery. The picotee and yellow ones had huge flowers, the red one less huge but richly colored and the plant had more numerous branches and buds. Of course, coastal California has an ideal climate for tuberous begonias, which do not like the heat and humidity often experienced in the East (though this summer has, on average, seemed cooler than normal).
I had to take a pic of these beauties, before I had to slice them up into cuttings and roots w/stubs in order to pack and bring them home with a large number of other goodies, about which I will post later.
Posted by geranios at 6:12 AM No comments: 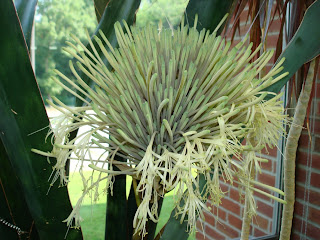 Finally the snake plant bud has burst into a huge ball of white flowers. The first flowers are already drooping in this daytime shot, they open during the early evening and begin to wilt the next day. Many more buds are ready to open successively over the next several nights. Since I left the plant in my classroom for the summer, I didn't get a picture of freshly opened flowers, nor did I get to sample the intoxicating fragrance released at night by them. Somewhere I do have pics of the fresh flowers from the year before, when I kept the plant outside for the summer (and could observe it in the evening and very early morning), but it will take some time to locate them. This is perhaps the most spectacular sansevieria species of them all, just wish I had a name on it.
Posted by geranios at 5:02 PM No comments: 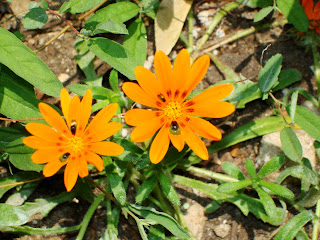 Gorteria diffusa is a most interesting annual from the winter rainfall region of South Africa. I got my seeds from Silverhill Seeds, the premier source for South African native plant seeds. I've been to South Africa three times, and basically one could describe the whole country as a natural garden. The number of ornamental species is incredible, particularly in the areas near Cape Town.

The seeds of Gorteria are fused into the dried flower base, so one plants the entire structure. This is unusual for members of the Aster family, most of which shed seeds individually once they are ripe. Even more peculiar is the flower, a bright orange daisy, about an inch or inch and a half across, with one to three green "beetle" marks. The markings probably facilitate pollination by attracting monkey beetles to the flowers (perhaps they are thinking they found a mate) which then pollinate the flower. Like many South African daisies, the flowers open in sunshine and close in darkness.

I planted the seedlings I started indoors into sandy soil in a spot that gets several hours of sun, and they grew and flowered for longer than I thought they would (many of these desert type annuals have very short lifespans), from early June through July. The plants spread out to form a branching mat across the soil. The plants expired in early August, but not before yielding numerous seed heads. The one problem I noted was that the plants are susceptible to powdery mildew during rainy weather, but an application of fungicide quickly cured it.