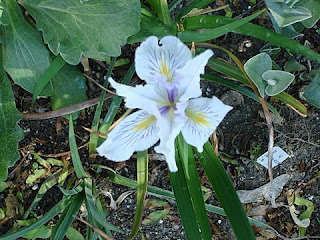 Granted, this may not be the most stunning PCI ever (pictures of PCI hybrids on the net, and in my newly arrived PCI newsletter, show some of the most exquisite shapes, shades, and color combinations to be seen among flowers), but the mere fact that it survived and bloomed in the eastern USA seems to be an accomplishment. It was grown from seed from the NARGS distribution, and this one flowered at about 3 years old this past spring. PCI are reputed to be quite difficult to keep happy outside of places with similar climates to our West Coast, eg dryish not too humid summers and rather mild winters. However, the species which have contributed to the PCI hybrids are varied in terms of how much moisture and cold they will tolerate, so by growing them from seed in less hospitable climates it should be possible to create via natural selection a hardier race of these lovely iris. The plant pictured is quite dwarf, as can be seen by comparing it to its neighbors, Haplocarphya scaposa, Kniphofia hirsuta, and Baptisia arachnoides. The blue penciling on the flowers is quite attractive, and I hope some others from its seed batch (a handful of plants) will bloom this coming year. We are having a pretty rough cold spell right now, with a couple of nights in the single digits (F), so its survival will be tested yet again.
Posted by geranios at 9:58 AM 1 comment: 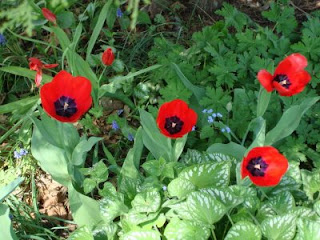 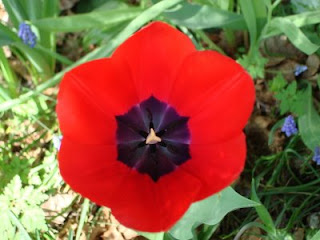 This is one of my favorite tulips, despite its unimaginative name. I got it from Brent and Becky's, and should have got more this year before it sold out. It is very graceful and the color is an indescribably beautiful and bright shade of red that goes well with the large blue center. It is in the Triumph group of tulip hybrids. I do hope it returns again this spring, even if it doesn't I will grow it again because of its exceptional beauty.
Posted by geranios at 10:34 AM No comments: 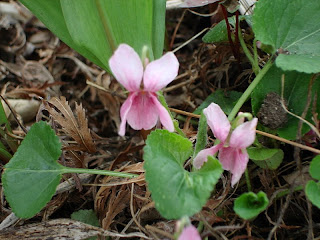 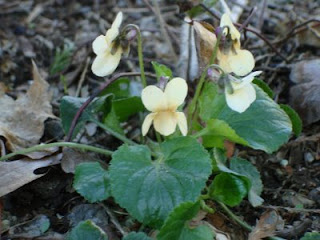 Viola odorata, the sweet violet, is a native of Europe that comes in many shades of pink, purple, white, and even yellow. It spreads in the garden from seeds and vegetatively, but unlike V. papilonaceae, it is welcome in my garden, for it is not difficult to control unlike the latter with its deep set rhizomes. The flowers are fragrant, if you get down low enough to sniff them. The pink clone came from Logees and the apricot colored one was given to me by Panayoti Kelaidis when I visited the Denver BG years ago. I treasure the latter for its unusual color and all of my forms early bloom.
Posted by geranios at 10:26 AM 1 comment:

Gladioli of a different sort 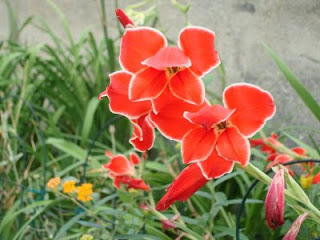 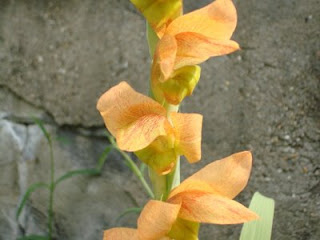 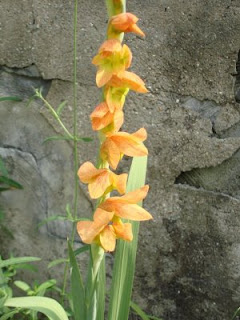 Gladiolus is primarily a South African genus, thus it is high on my list of desirable plants for my garden. The red glad in my home garden is an old cultivar, "Atom", which I got from Ellen Hornig. It is a relatively small glad with bright red flowers with a distinctive white picotee edge. Corms left in the ground, but not far from a wall, survived the winter in my school garden last year. The orange speckled glad is G. dalenii, from a garden in Johannesburg, S. Africa. My source probably got it from the wild somewhere. G. dalenii is a very variable species. It is a vigorous plant that produces some of its new corms on stolons, a feature of this species. I dig the corms each year, but some get left behind and seem none the worse for the wear. I've been crossing both of these with more typical gladiolus hybrids and other species, and look forward to seeing the first blooms of the progeny either this year or next year.
Posted by geranios at 10:15 AM No comments:

South Africans (mostly) in my garden 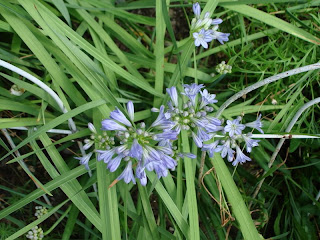 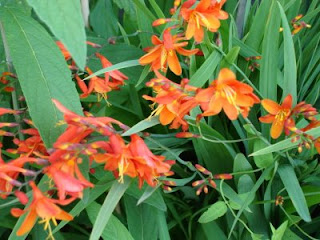 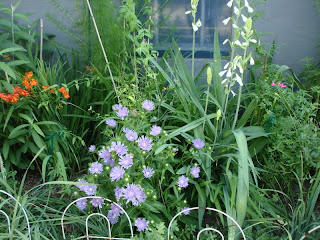 Ellen Hornig, of Seneca Hill Perennials, runs a mos impressive nursery and garden in upstate New York. Two of the three South African plants shown in these photos came from her. Crocosmia "Distant Planet" is a very vigorous selection that has grown in her garden for years, and in mine for a couple of years. It spreads quite easily, and the bright orange flowers quite showy in early summer. Agapanthus "Old Wayside clone" also came from her, here it is full bloom in its second season in my garden. It is slowly multiplying and shown excellent winter hardiness thus far. I have not seen it set seed, so it may be sterile or require another clone for pollination. It is much shorter than the typical agapanthus of California gardens, and unlike them it is totally deciduous with the onset of colder weather. The tall spires of Galtonia candicans have graced my garden for years, grown from seeds I originally got through the North American Rock Garden Society seed exchange. It sets seed readily, so I have enough seed stored over the years to grow a meadow full of it should I acquire enough land to do so in the future. The only non South African prominent in one of the photos is Stokesia "Peachies Pick", a compact and lovely selection of a native (southeastern) USA species that I picked up at Plant Delights. 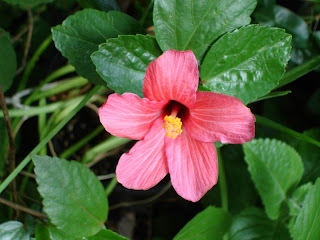 Hibiscus fragilis is a very rare species native to Mauritius Island and perhaps Reunion. It is called the Mandrinette, and is in very limited cultivation. The rather small flowers, for a hibiscus, are borne in spring and summer. They do not appear to be self fertile, so I will need to wait for more than one plant to bloom to set seed. My original seed came from Chiltern Seeds, whose catalogue is a delight to read.
Posted by geranios at 9:34 AM No comments: 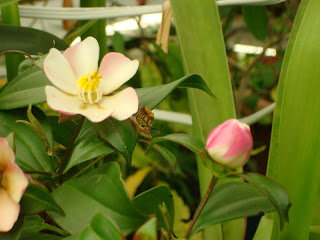 This photo is a bit more yellowish than it should be, due to a camera flash I think, or maybe the lighting this plant is growing under in my classroom. I have it out for the summer, and bring it in during fall when it tends to set lots of buds. The flowers are white with pink shadings, and the buds are particularly beautiful. I got it from Kartuz a few years ago, and it has grown quite large and bushy. Even the foliage is nice, glossy green with a thick texture. It is in the Melastomaceae, from forests in the New World. I am somewhat suprised it isn't more commonly seen, because its not hard to grow nor propagate as far as I can tell.
Posted by geranios at 9:29 AM 1 comment:

The best cattleya I ever owned! 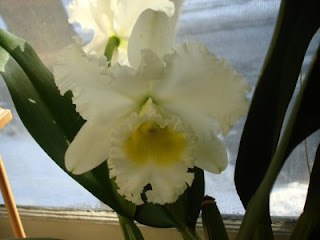 If I had a greenhouse, it might be a lot easier to get amazing results from all the cattleya hybrids in my collection, but under my conditions (indoors for the winter under flourescent lights and window, outside for summer) there is one cattleya that it utterly reliable and not sloppy in its growth either. This is Blc. Burdekin Wonderland "Lake Land", in bloom last week. It is an upright growing plant that doesn't try to run out of the pot or upwards as though it was trying to climb stairs (or a tree trunk) as do so many cattleya hybrids, nor does it tend to send leaves out in all directions. It blooms reliably at least twice a year. The flowers are classic cattleya form, broad frilled petals and lip, and it is strongly fragrant a few days after the flowers first open. I got it at a mark down at the end of the last (2 yrs ago) orchid show in Manhattan. Actually my wife wanted it, and when it first opened the flowers buds it came with from the show, I was disappointed in their size. But when it rebloomed and the flowers reached their normal (huge) size, I was floored. Even though it is not a minicatt by any means, not even close, it is a great plant for indoor gardeners.
Posted by geranios at 9:18 AM No comments: 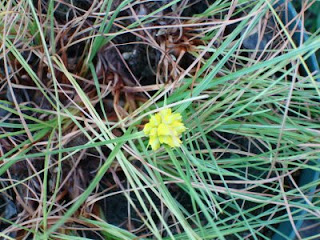 This delightful plant is quite common in the grasslands of KwaZulu-Natal in South Africa. I brought back some plants while I worked at the NYBG and also got seed from Silverhill. From seed of one of them I grew out this plant, which flowered this year with bright yellow clustered spikelets. My photo does not really do it justice, but its all I have for now, next season I hope to get more pics. It used to be C. obtusiflorus ssp flavissimus, but I am going with what Elsa Pooley calls it in her wonderful, and for me indispensible, "Mountain Flowers" field guide to flora of the Drakensberg and Lesotho. C. sphaerocephalus is semidormant during the winter, and will grow and flower during the summer, as would be expected of most flowers native to its area of South Africa. It likes moisture, especially when it is actively growing, and should never go really dry, as far as I can tell.
Posted by geranios at 9:08 AM No comments: 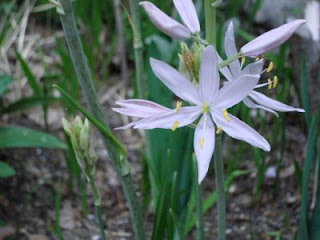 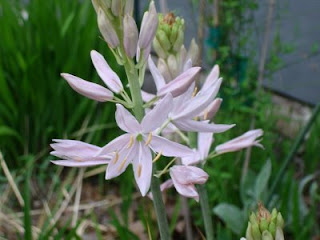 This charming pink flowered form of Camassia, probably C. leichtlinii, came from BuggyCrazy (I love that name), a lady who grows some wonderful bulbs out in Oregon, and who seems to be plagued by a neighbor or neigbors who do seem, indeed, to drive her crazy. It is supposed to be an unusual variant from the normally blue, rarely white, flowered species. The original population was wiped out by highway construction, so the story goes. She has propagated the plant for years at her nursery. It did well this past spring in my home garden--all these flowers came from a single bulb, so I ordered a handful more this year from her.
Posted by geranios at 8:25 AM 1 comment: 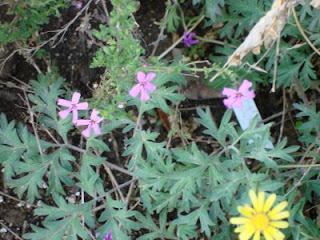 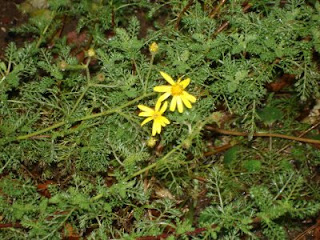 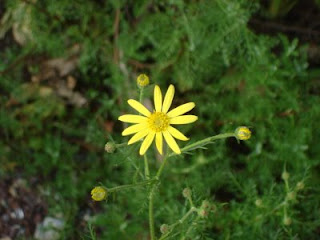 Late November and early December were pretty harsh this year, with up and down temperatures and lots of cloudy and stormy days. The purple flower in one of the pics is Sutera phlogiflora, from Silverhill Seeds. It bloomed all summer and fall, first in a pot on my terrace, then in the school garden till well after frost. By now it appears to be toast, but I am curious to see if it will either resprout or resow, considering that it comes from fairly high altitudes in South Africa. The yellow daisy is Senecio seminiveus, which reaches the highest elevations in the Drakensberg. It overwintered outside in a basement window well in a pot last winter, so I planted it out in the school garden near the brick wall. It spread like crazy, rooting wherever it touches the ground, but no flowers appeared until very late, opening in November after the first frosts of late October. The pic where it looks wet from a recent rainstorm was taken on December 10th, after Chappaqua had some very cold frosts and all other flowers were long since gone. I wish it would bloom earlier, but I value it for its incredibly frost resistant flowers when all else has given up. In fact when I went in earlier this week to check on my classroom collection, the senecio still had some decent flowers on it. Weatherbeaten yes, but still a fresh yellow color, as though it was merely waiting for a thaw to resume growing. Judging from what seems to be the trend of late around here, it may be waiting a long time for a decent thaw, this winter is starting off on the severe side, with frequent snow and cold fronts passing through.
Posted by geranios at 8:03 AM No comments: