A special form of Pelargonium alchemilloides 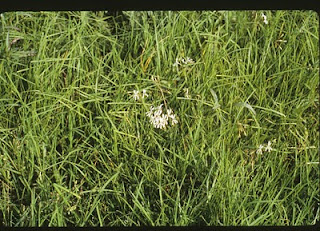 Cliking on the pic will enlarge it so you can better view the relatively large flowers of this form of P. alchemilloides growing in grass in the south Cape near the Herbertsdale/Gourtizbrug area. Michael Vassar had collected this form before, and I grew it for years from seeds he sent me. I also recollected more seeds of it myself in 1993, and still grow some plants out every now and then from refrigerated seed. Most P. alchemilloides have flowers that quickly shed petals and set seed pods, so are best appreciated for their foliage, which is also variable. This form has copious good sized pink flowers that last a decent while, and can be grown as an annual outside in a sunny spot for the summer (or dug up and overwintered for another season outside the following year). It also makes a great basket plant in a greenhouse. There is an even larger flowered form of alchemilloides I have that comes from Stilbaai, also in the south Cape. While I never saw it on my trip, I got seed years ago from Charles Craib. It has comparatively huge white flowers, though it is not as floriferous as the pink form mentioned. Probably both "forms" deserve species rank, indeed I believe that much of what is called alchemilloides is really a swarm of distinct species, and I recall a paper by Mary Gibby stating as much years ago.
Posted by geranios at 2:35 PM No comments: 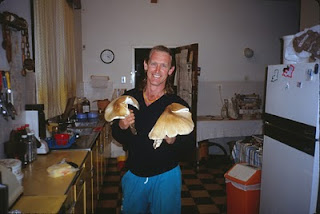 For those of you who are into gesneriads, perhaps you recognize Martin Kunhardt of Streptocarpus fame. In 1993 I had the privelage of visting his farm Wahroonga in the midlands of Natal, where I and Charles Craib, who I was travelling with, overnighted. He brought in this huge edible mushroom, which I imagine we ate, though honestly I can't remember if I did. What I do remember was the wonderful fields and wooded gullies at Wahroonga with all manner of wildflowers, including streptocarpus and impatiens in the lightly treed ravines and many other kinds in the extensive grasslands which predominate in the area. Martin had a most impressive collection of Streptocarpus species and equally impressive hybrids that he made himself, I've never seen anything like it since. He also had some other gesneriads such as sinningia species acquired from overseas contacts I imagine. They were kept in a plastic/lathhouse which could be closed up for the winter if needed, for sometimes they do get a frost and even a touch of snow, though nothing like here in NY! Wish I had time to visit a little longer, as Wahroonga was a cool place!
Posted by geranios at 2:19 PM No comments: 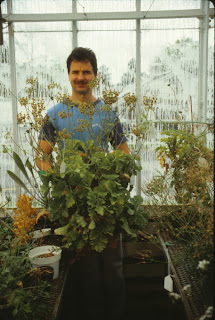 I grew this huge specimen of the very old species hybrid P. x glaucifolium, for several years, first as a small plant I got from Logee's in Ct, then at Cornell in the Kenneth Post Greenhouses during my grad student years, where my pelargonium research collection was maintained. It is a night scented primary species hybrid with curious dark maroon flowers with yellowish edging. In summer it is best to let it go dry, whereupon it drops its foliage and all that remains is a tuberous rooted caudex and some rather thick branches. It can be propagated in fall when growth is ready to resume from cuttings or tuberous root divisions. Gertainly P. lobatum is in its ancestry, possibly with P. gibbosum, a very different looking plant with yellowish night scented flowers and long lanky stems. I was never able to get it to set its own seed, but it could be hybridized with another hybrid I made of Pelargonium gibbosum and P. cortusifolium, to make an interesting hybrid (which probably no longer exists, unless one of the various people I sent them to still has them). Pelargonium is an incredibly diverse genus with all kinds of hybridizing potential, far more than has been realized. Standard plant breeding techniques can produce many interspecific hybrids within the various pelargonium sections (subgenera), and sometimes between them, though the modified embryo rescue technique I developed as part of my doctoral research made even stranger crosses possible, such as Pelargonium luridum x incrassatum, another cool but probably now lost hybrid. Probably the most bizarre cross I made, but which I did not get to bring into full existance due to the fact that I had finished my thesis work and no longer had access to facilities to continue my work, was a cross of P. cotyledonis x bowkerii. I'd give my eyeteeth to see what that would have looked like, I had gotten it up to the stage of just beginning to produce shoots in tissue culture, but the the cultures died when I had to take them home. For those who know their pelargoniums well, it is a most unlikely cross, cotyledonis is a highly unusual island endemic (St. Helena Island) long isolated and far from all other pelargoniums, and P. bowkeri is a geophytic species with large fringed petaled flowers and carrot like leaves from KwaZulu Natal in South Africa. Perhaps I will find a way one day, maybe after I retire, to recreate this and other new pelargonium hybrids, it sure was fun doing so at college!
Posted by geranios at 7:26 PM 6 comments: 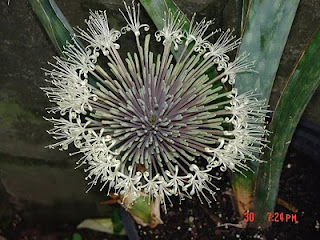 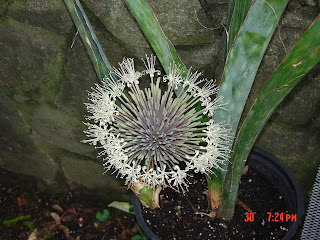 I've blogged about this amazing Sanseveria before, but I just found the pics which show the flowers in full bloom in the evening. They fade during the day, and a new ring of flowers opens up the next evening above the faded ring from the night before. The huge inflorescence is about a foot wide. These pics were taken a few years ago when I summered the plant outside, but for at least two years since I've left it in my classroom through the summer, since it is so now big that it is difficult to fit in in my car to drag it home. The one disadvantage of this is that I am not there when the flowers look their best, by the time I come in to check on the summer residents and my school gardens, the flowers are past their prime.
Its an enormous species with impressive foliage and massive rhizomes, even it its huge pot it is pushing on one side, so I will have to find something new to put it in this coming year--a bushel basket, perhaps?!
My source said he thought he collected the plant in Kenya many years ago, and he has it growing in the ground in his greenhouse for a long time. Sanseverias are great collector plants, they live forever, are hard to kill, very accomodating of less than perfect conditions (except cold and overwatering in combination, especially), and easy to prop (leaf sections). No one ever seems to admire their fragrant white flowers, but in this species they are a star attraction, easily rivaling any other flowering plant for bold effect and interest.
Posted by geranios at 6:24 AM 2 comments: 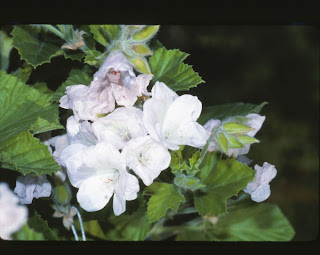 This slide brings back memories of this fine plant I grew from a cutting I got from a friend years ago. This unusual white flowered form had been making the rounds and was supposed to have been originally collected by Ellaphie Ward Hilhorst, if memory serves me correct. She is the famous (among pelargonium lovers) artist who painted the superb illustrations in the Pelargoniums of Southern Africa book series. I had the pleasure of meeting her on my trip to South Africa in 1991, she was a most gracious lady.
Pelargonium cucullatum is the principal ancestor of the regal geraniums P. x domesticum. It is quite common around Cape Town, when I saw it in flower the bushes of it remind me of azaleas in effect. Typically the flowers are pinkish-purple, but as with most plants diligent searching sometimes reveals a mutant with a different flower color. There are three subspecies or variants of P. cucullatum, most easily distinguished by leaf shape and texture. This plant was from the ssp strigifolium form. I no longer have this plant, nor does the NYBG where I grew it years ago, though I think I have seed of it stashed somewhere in the fridge. Seed of P. cucullatum (and other pelargonium species within section Pelargonium of the genus) is very long lived, even if stored at room temperature seeds can still be viable more than a decade later. Depending on the genetics of flower color in this species, if I could find the seed I might be able to grow out a similar plant, or perhaps they would come out more typically colored. In any case, it is hard to flower P. cucullatum without a greenhouse or cold sunroom, since it needs cool nights, preferably with short days, to set flower buds.
Posted by geranios at 7:23 PM No comments: 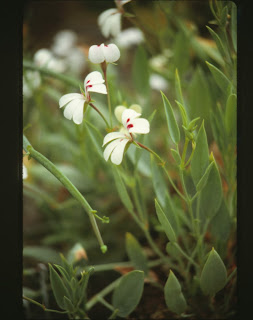 I'm continuing to scan old slides, so forgive the black edges on the pic, no time to play with photoshop yet. Clicking on the pic may reveal more detail, I'm trying to upload pics with more "dpi" in them now that I figured that out. P. lanceolatum is one of the oddest pelargonium species, and one which I would dearly like to get some material of to grow again. When I did grow it, it was a good grower with a spreading habit and the most unusual succulent grey green leaves. Roots can sprout additional shoots, but it is self sterile, so one would need two clones to set seed on it. It is not widespread in habitat, nor, as far as I can tell, in cultivation. It is a beautiful plant, with lots of flowers in spring and would make an ideal basket plant or even a groundcover in a suitable climate--sunny, not too much rain, and with little frost.
Posted by geranios at 7:13 PM No comments: