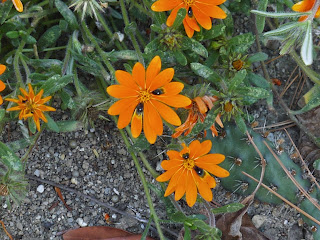 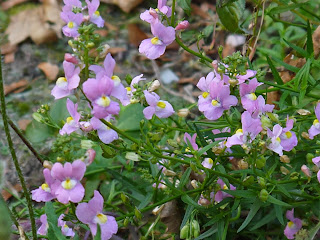 ﻿ Fall is a strange time of the year, some plants are fading away while others burst into bloom as the cool air invigorates them.  This fall was especially dry and sunny, and frankly odd for us but much preferred to our more typical rainy and gloomy Octobers.  September is usually the last decent month, but we had a nice October and November has not been particularly bad either, though frost has finally struck and put an end to tender plants, such as the Ceratotheca triloba shown above.  Still there are many plants that tolerate some frost, especially South African plants from habitats where frost might occur during their growing season.  Thus Ursinia nana, Senecio sp (both of which I collected seed of myself back in 1993), Arctotis fastuosa, and Nemesia sp Verlatenkloof (a sp collected by Panayoti Kelaidis and now, in my self sowing strain with some N caerulea genes mixed in) continue to look great even after a couple of frosts in the upper 20s F.  The Gorteria diffusa survived all summer and took off as fall approached, it did well after the first frost but is now looking tattered after another round of frosts. A Berkheya hybrid with pale yellow flowers appears to be one between B radula and perhaps B purpurea, its leaves are more prickly than pure radula but the flowers are closer to radula than any other species I grow.  B. cirsiifolia in the school garden looks great even out of flower with its attractive foliage, in mild winters it may remain evergreen but most often it dies back to some degree before regrowing again.  The Leonotis dysophylla flowered just before the first frosts, so I cut the flowers and brought them in along with some tall marigolds, they looked quite nice on our table when we had some folks over for dinner soon afterwards.  The diascia hybrid is, admittedly, just one of those things from the local Home Depot (or as Panayoti refers to it, Home Despot), it has survived a few frosts but I doubt it will be as tough as some of the species are, notably Diascia fetcainensis, which seems to be the hardiest of them all, at least among the ones I have tried.  I transplanted a piece of it from my school garden to my home garden and it is taking, so I anticipate it will make it through the winter just as it has done at school for the last three years.  I've also planted out lots of young Crinum bulbispermum and Nerine bowdenii in the backyard gardens and quite a few Kniphofia in what was part of the front lawn, so I hope for a mild winter and plan for an exciting new growing season next year.
There are many more things to try in the garden next spring from my well stocked refrigerator full of seeds, and quite often new seeds worth trying become available from South African vendors such as Silverhill Seeds and Lifestyle Seeds.  Its fun growing things that no one even knows about, let alone think is possible, in my garden.  Novelty is one of the fun things about gardening, and one thing is for sure, as my home gardens continue to develop, they most definitely will not be like anything else in the neighborhood!
Posted by geranios at 6:28 PM 6 comments: 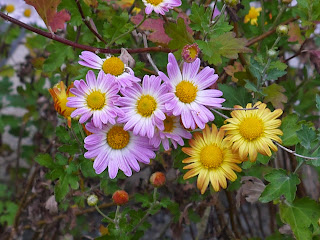 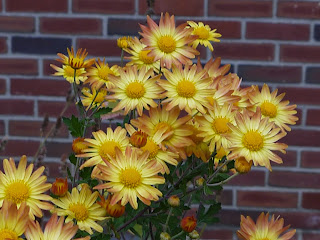 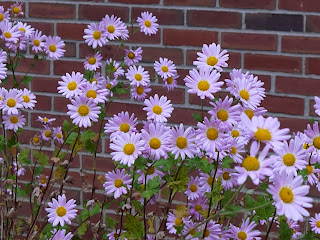 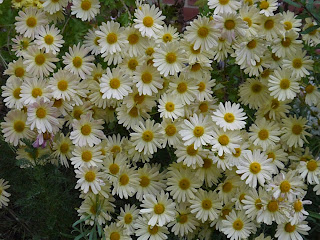 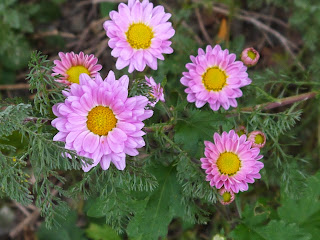 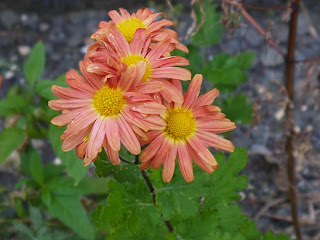 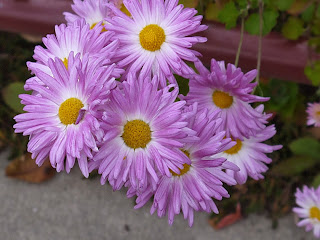 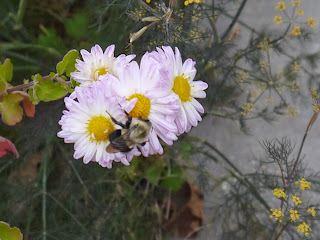 Korean mums are in full bloom at my school garden, they have done superbly despite the October drought and no supplemental watering.  Over the years they have self seeded and new colors appear among the seedlings.  They were apparently bred in Connecticut back in the 1930s from a particularly hardy mum species, but because of their tall and sometimes floppy growth one doesn't see them around much these days.  NYBG grows some, and used to have a huge garden full of them back in the day when I worked there, and they are also still grown, I think, in Central Park on the east side near 5th Avenue in a garden there.  I was given seeds by a fellow NYBG staff member some years ago, and I grew a few out for my school garden years later (I keep the seeds in the refrigerator, a practice that greatly extends seed viability).  They cavort well with the other tallish plants in their allotted area at the top of the slope (though some seedlings have appeared lower down) and sometimes flop over the sidewalk back there, but other teachers have complemented them on their colors and a light fragrance they seem to exude on nice days.  The sleeping bumblebee in the last pic is a typical sight at this time of year, as the weather grows colder and frost threatens. We have been spared any but the lightest touch of frost thus far but that wont last much longer.  The bumblebees tend to sleep on flowers overnight rather than returning to their nest.
These mums are not for small gardens, but unlike the color blobs that pass as "mums" sold in every grocery or box store this time of year, they are graceful plants with an endless variety of colors  in single to semidouble flowers.  They fit well into a cottage garden design and are bone hardy.   Deer will occasionally eat some of the flower buds, but for some reason this year the hooved rats did not bother them at all.
Posted by geranios at 8:29 AM 2 comments: