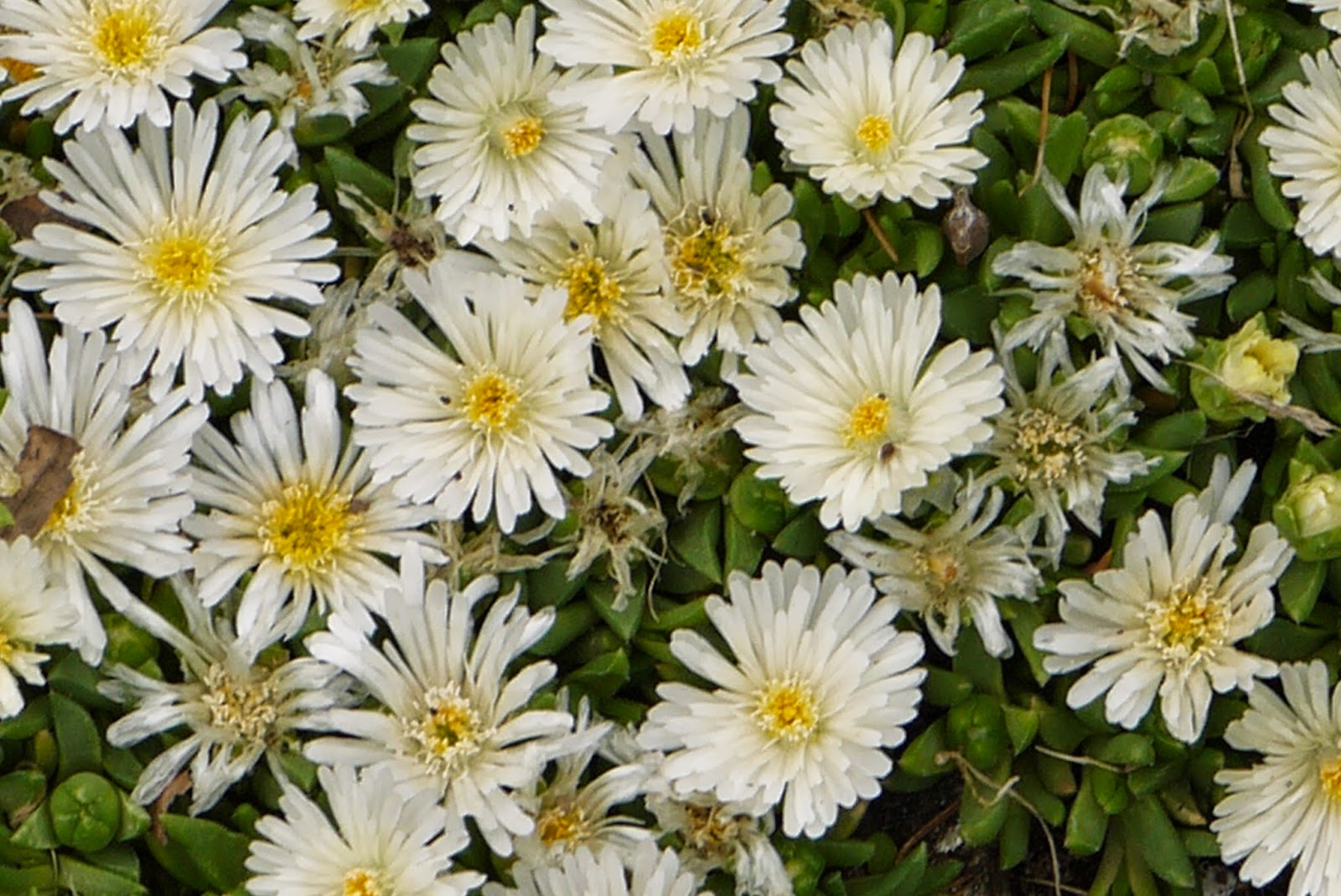 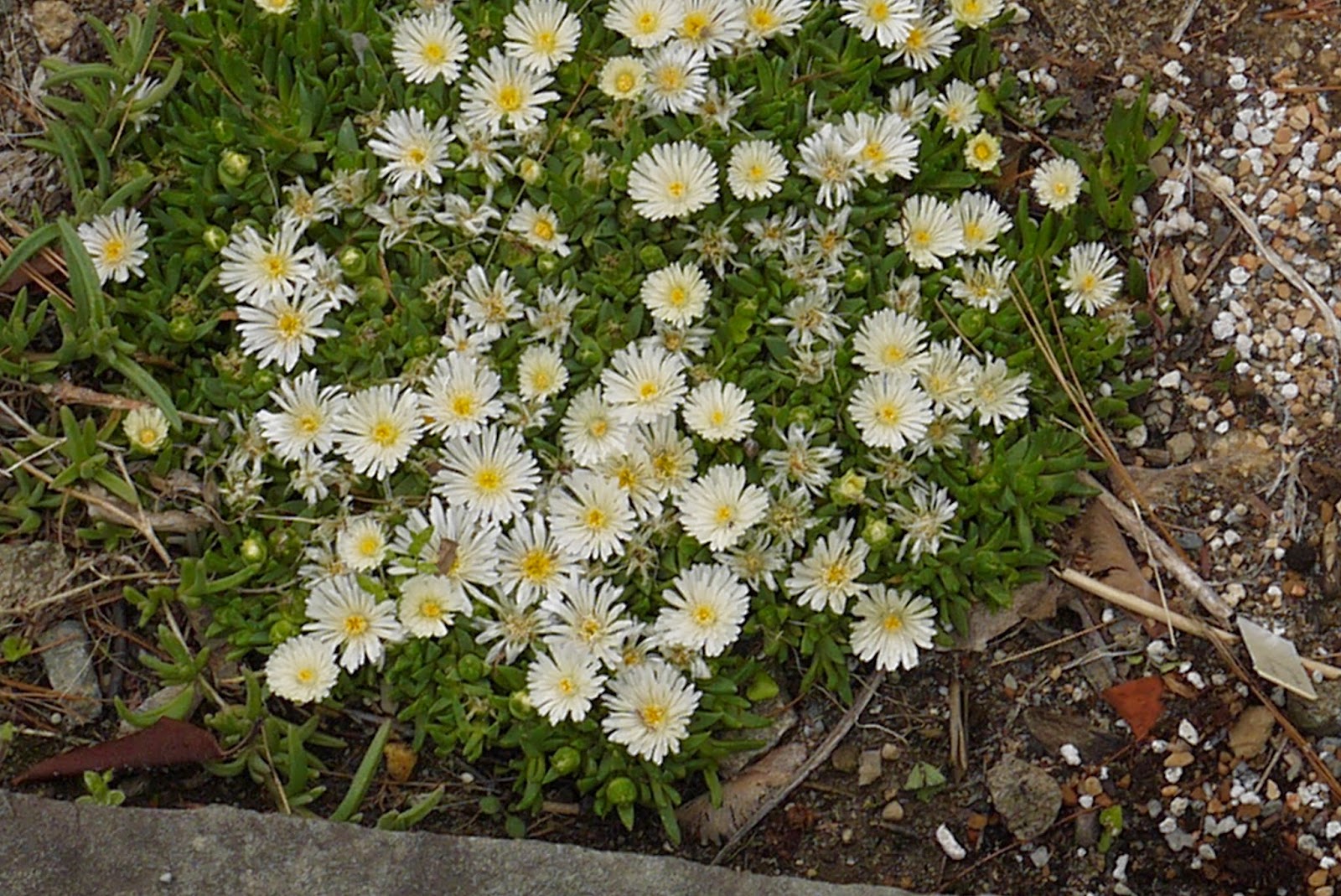 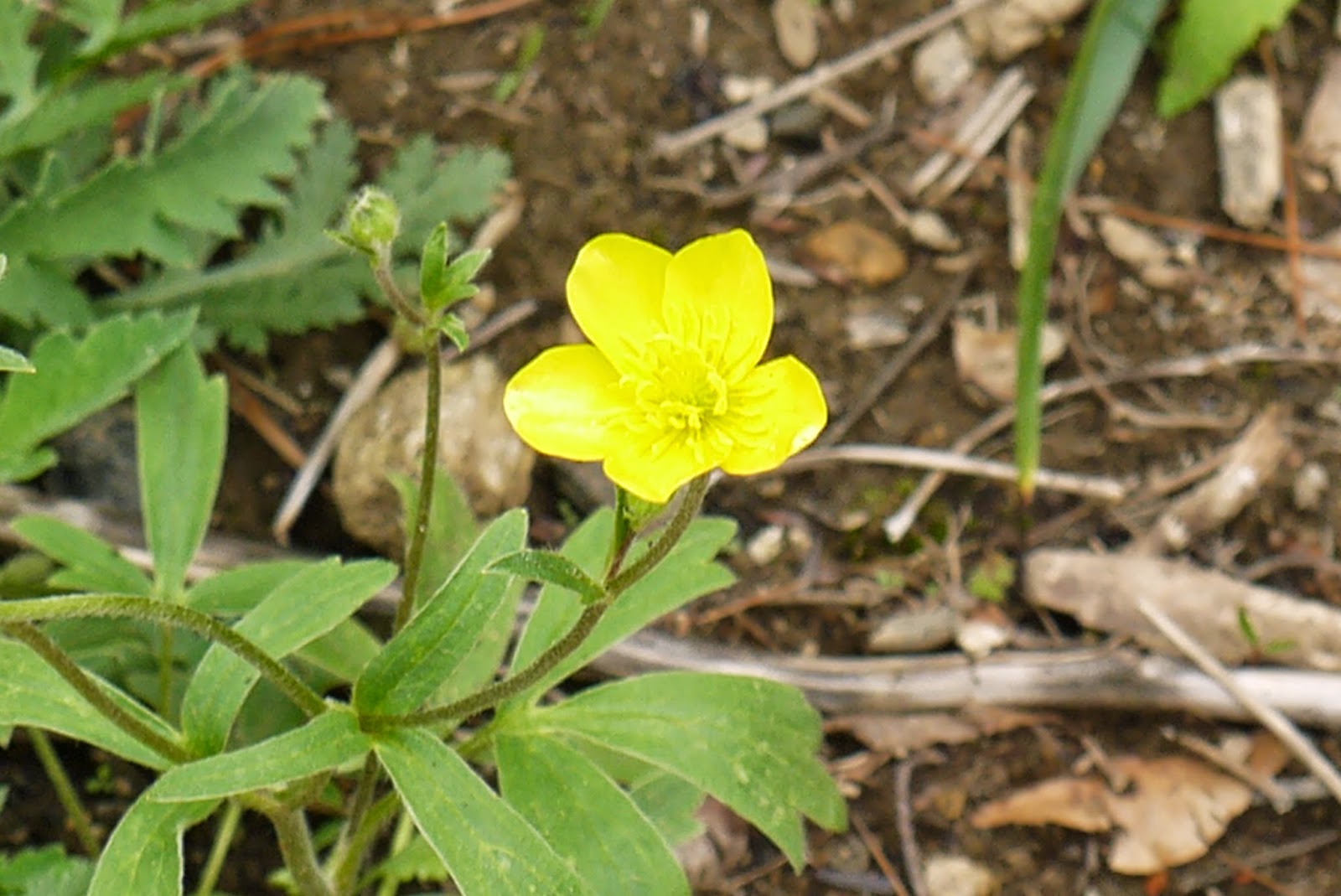 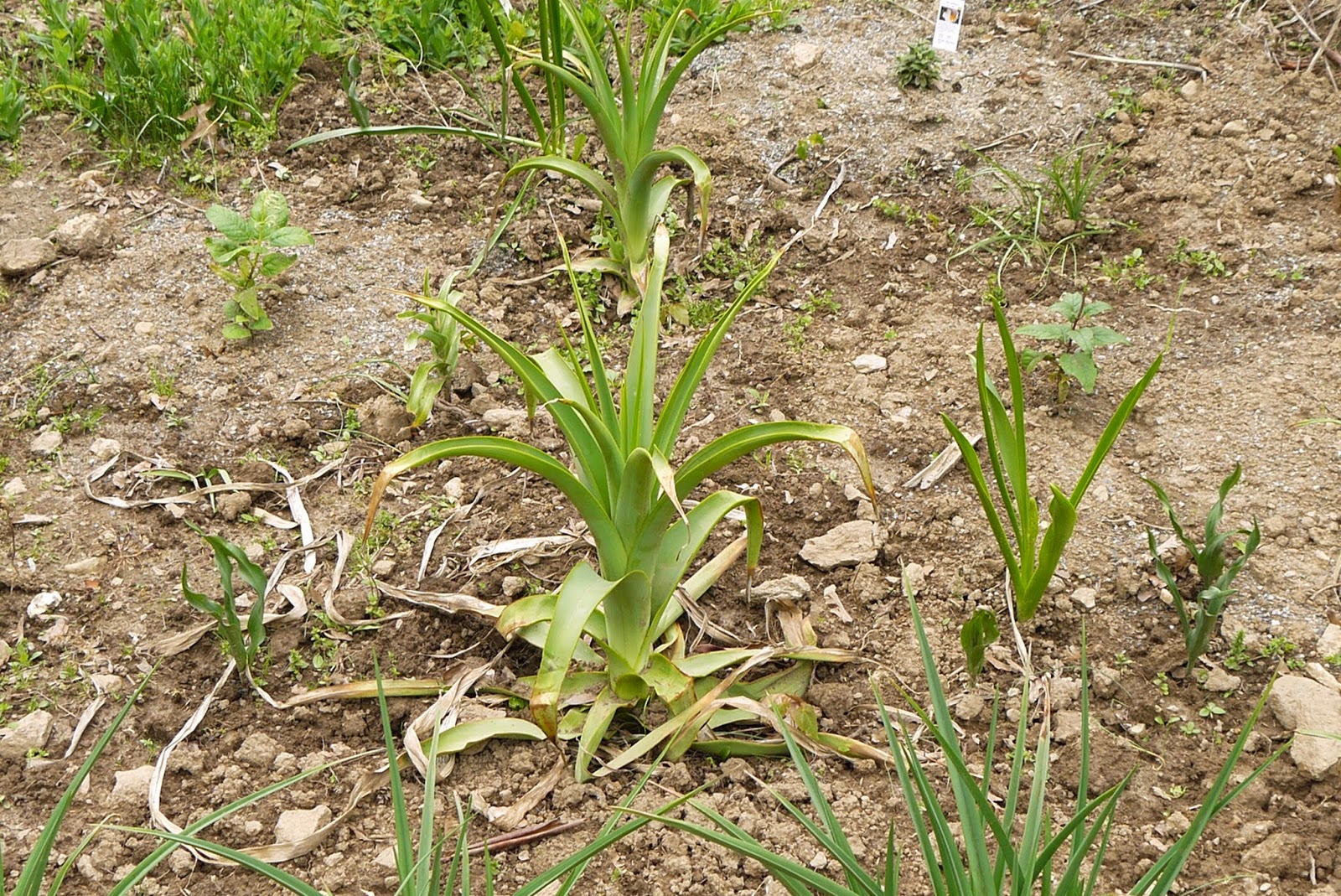 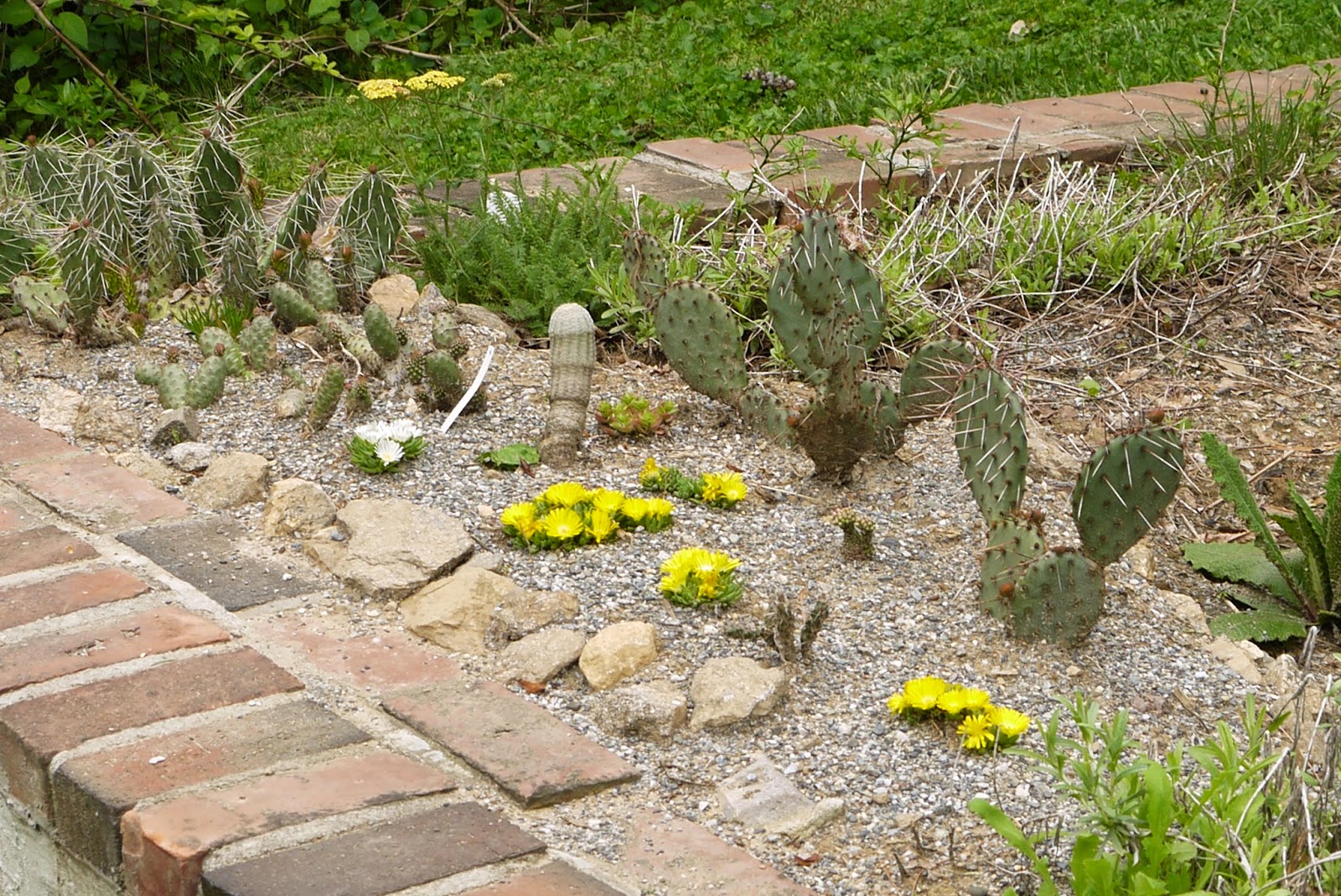 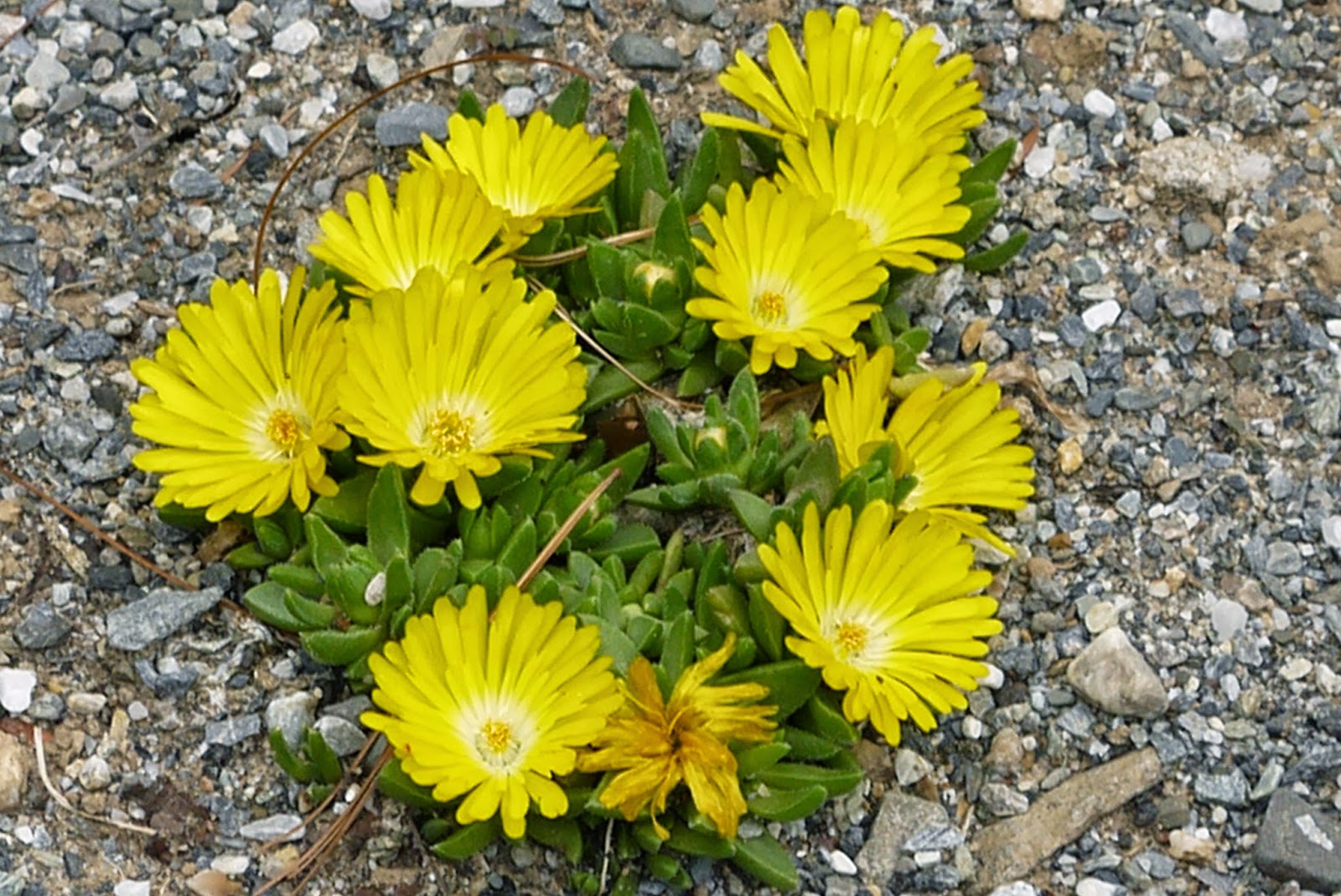 Delosperma congestum
Its been a long and bitterly cold winter, probably the worst I've seen in many decades.  Low temps reached 0F on one occasion and 1F on another occasion and we had continuous freezing weather from January onwards.  This freezing was broken once or twice by thaws near the beginning of a series of "polar vortexes" which came down across the Midwest and eastern US repeatedly well into March.  "Polar vortex" seemed to be the new buzzword this year for arctic cold fronts.  Indeed buddlieas are killed back to the base, my Tibetan Daphne species from Heronswood all died back to the base and no sprouts are seen thus far, figs died back or were killed in the general area as well.   Yet many South African plants proved hardy, including Helichrysum splendidum, various dieramas, some agapanthus, Crinum bulbispermum and x powellii, Albuca shawii, Berkheya purpurea, cirsiifolia, radula, macrocephalus, and a couple of multijuga, Galtonia candicans, Delosperma congestum (not its real name, it is probably not a delosperma but it doesn't have a new name yet pending futher taxonomic studies), Cotula sp Tiffendell, Diascia fetcainensis, Kniphofia northiae, baurii, and some other spp and hybrids, among others.  The SA plants along the wall at school also faired well in their protected environment, just about all of them are regrowing too.  Just a few things are shown in the pics above, notably the utterly tough "delosperma" mentioned earlier, in both its yellow and white forms it is extremely cold resistant and does not suffer from winter wet provided it is in well drained soil.  Opuntias also did very well this winter, and are just now putting out new growth, and hopefully soon, new flowers.  I've been busy redoing the beds by adding road sand (minus salt) to increase drainage in our heavy soil, and adding new plants.  Large areas of lawn have been covered with black plastic to increase garden space and, though I never thought I would ever use herbicides, I am using roundup to kill grass, some hostas, and Hemerocallis fulva, onion grass, Ornithogalum umbellatum (seems resistant but I have hit it three times), and other weeds as manual removal of all of this is impossible or ridiculously difficult.  I am aware of the controversy over roundup, but of all the herbicides it seems the safest in its mode of action and the fact that it is not persistent as nearly all the others are.  So I opted to make life easier as I tame this property and reshape it according to my vision.
I planted the Crinum bulbispermums last summer and am surprised to see their excellent rate of survival even in heavy soils.  Most were from South African seed but some came from PBS seed distributions of a form called Jumbo which was selected and is known to be hardy in the Midwest.  They are young but maybe I will get a flower or two this year.  They certainly like being freed from the confines of pots.
The ranuculus is a species I grew years ago from left over NARGS seed when I was a grad student at Cornell, and I have had it with me wherever I have gardened.  It is not aggressive except in a lawn as it hates competition, and it dies back in summer to little finger like roots, kind of similar to the much bolder R. asiaticus hybrids but on a much smaller scale.  Its foliage is attractive and appears early, and the bright buttercup flowers are nice as well.
Inside many pots of seedlings await transplanting into the gardens, and I need to order more road sand, having already gone though nearly 2 yards of it.  But its worth the effort.
Posted by geranios at 8:13 AM 2 comments: