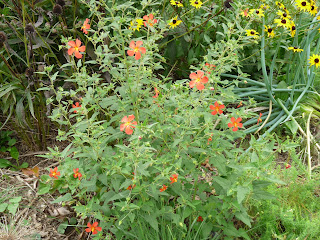 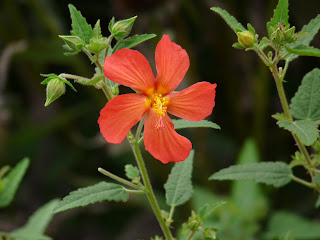 This is a very bright red little hibiscus that has been self seeding for a few years in my school garden.  It flowers in late summer and early fall from self sown seedlings, but a longer blooming season can be had by starting seeds indoors in spring to give it a head start.  It grows best when it is warm, and prefers a sunny spot.  Pavonia missonianum is native to Argentina, and my plants were started from seed I had stashed in the fridge from some long forgotten Index Seminum.  My original plant set copious seed, and although I have stored plenty of it, apparently quite a few remain in the soil to give rise to seedlings every year as soon as the warm weather hits.
It is a trouble free plant save one problem--it is a preferred favorite of budworms that destroy the flowers and seed pods.  This caterpillar pest seems to appear sometime after the weather begins to cool, and is also fond of petunias and nicotiana.  Ruthless hand picking helps, but spraying insecticide or BT powder (a bacterial disease of caterpillars) would be necessary if one had more than a few plants.  The stems, seed pods, and foliage are somewhat sticky, and this deters most insects, perhaps the problem is that it deters ants that might otherwise prey upon the budworms.  Still it is a very worthwhile flower to grow, the flower color alone is worth it.  Thus far plants do not survive NY winters, but plenty of seed is set (if the budworms don't get the pods) for another generation.
Posted by geranios at 7:25 PM No comments:

I do have a bad habit of losing labels and although I have a near encylopedic mind when it comes to plants, I am not sure what this plant is.  It probably came from Silverhill and is a rapid growing plant with very divided leaves, I want to say its Arctotis revoluta, but the flower color is wrong. I like the interesting foliage, and it spreads out over a fairly large area, but alas it is not a profuse bloomer.  I counted something like two flowers all season long.  Perhaps it had something to do with the lack of sun this past summer, or maybe it is naturally a winter growing plant that wouldn't flower well if it doesn't get a prolonged chill.  The flower is very much like the flower of Senecio macrocepalus, and about the same size too, which would be more impressive on a smaller plant.  This Arctotis is not hardy at all, frosts quickly did it in, but not before I took cuttings and rooted them in water in my classroom.  With some luck, I will overwinter them under lights and set them out again next year to see what they do.
Posted by geranios at 7:43 PM No comments:

Gaillardias are pretty common in gardens, and I do have some of the more commercially available versions in my school garden, where they are valuable for their profuse and long season of flowering, pest resistance, and the lack of interest they engender from the resident voles (who have been a problem this year) and occasional deer.  I also like the fact that they attract butterflies and other pollinating insects, so they help the garden become alive as the pollinators flutter and buzz around on sunny days.
But there are some rarer gaillardias, which are nonetheless great plants for the garden.  G. aestivalis is pretty much a Texan species, with three recongized varieties. G. aestivalis var winkleri is an endangered species native to a limited area in 3 counties in Texas, and it is unusual among gaillardias in having cream, pink, or in at least one selection (Grape Sensation--have to get a hold of that one someday), purple flowers.  In nature it grows in sandy soils in areas with clearings in oak pine woodlands.  My original plant came from Plant Delights and seed of it (I purchased it in flower, so it may have crossed with neighbors) gave rise to the plants I now have.  The original plant perished after one winter, but I germinated some of the seed indoors and set it out in 2010, about 3 plantsg grew and flowered, but little seed was set due to the few and late flowers I had that year.  Surprisingly they all survived the winter of 2010-11, (which did feature unusually excellent snow cover) and reemerged more vigorous, and flowered like mad this past growing season.  One of the plants had deeper pink flowers than the others, and all of them set copious seed, so now my seed stocks are replenished so I need not fear losing it if this winter turns out to be particularly harsh (so far, not the case).  I am also curious to see if it self sows next year.
G. aestivalis var flavovirens came from Bustani Farms, a great nursery in Oklahoma (sadly they stopped doing mail order shortly after I got my first order from them, I do hope they reconsider, its getting harder to find cool nurseries with interesting and different plants these days--and what they sent was second in quality to none).  I got two plants so as to get seed in case they are self sterile, and both plants started blooming a bit later in summer than did var winkleri.  They produce more flowers than var winkleri, and also set plenty of seed.  I wonder if the two "varieties" crossed, when I raise the seeds or evaluate whatever self sows in the future, I will find out the answer.  If I don't see any evidence of hybridization, I would assume that they are in fact two very different species and not varieties of the same species.  In nature var flavovirens grows not only in Texas but also in several other states to the north and east.  Its flowers are yellow, with contrasting purplish centers that are attractive in their own right.
While neither one of these gaillardias has as full petalled flowers as the standard ones in gardens, they are valuable for their more delicate, whimsical look and profuse flowering.  Despite excessive record rainfall from midsummer through early fall, these gaillardias still performed very well, though I did have them planted in a special raised area with well drained soil.  When they die back for winter, nothing is alive above ground, so don't assume they are dead and rip them out.  Sprouts reemerge from beneath the soil near the old dead stems in spring.  I think both gaillardias are excellent candidates for rock gardens, cottage gardens, and prairie/sunny wildflower gardens.
Posted by geranios at 7:40 PM No comments: