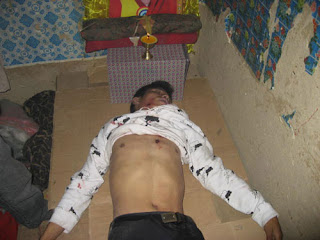 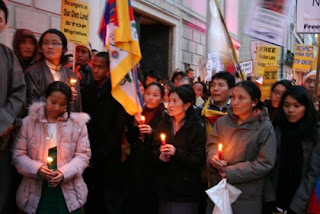 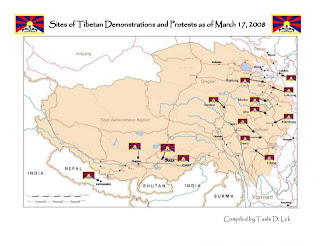 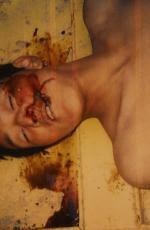 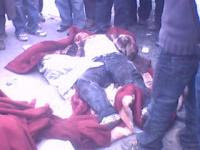 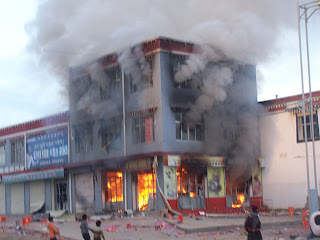 How many more of Tibet's youth must die before the world takes notice? Some of the victims portrayed here, and in other images easily found on the net, are the same age as some of the students that I teach. I cannot fathom how even a repulsive regime like the one in Beijing could do this to children. Still, the Chinese government rants about how the Dalai Lama directed the protests (as if he could or would do so), the evil "splittists" from abroad are conspiring to destroy China, and other such patently paranoid fantasies. Evidently they are so convinced of their truth that they feel the need to block Youtube and google news in China, among the usual stuff from the net that they block everyday (like anything on Tibet from a non Chinese source). The Chinese leadership, which includes the butcher Hu Jintao, well known in Tibet for his violent suppression of protests when he was Beijing's appointed leader of Tibet in the late 80's, seems unable to grasp the realities of the situation. They villify the Dalai Lama, who is willing to settle for a lot less (autonomy within China) than most Tibetans, especially young ones will (nothing short of independence). Perhaps this uprising marks the end of the Dalai Lama's control of the Tibet movement as a nonviolent one with limited goals. China's hard line policies and lack of interest in serious discussion with the Dalai Lama and his government are driving Tibetans towards more radical means of resistance and more uncompromising goals. Tibetans see that the Dalai Lama's "Middle Way" policy of trying to find accomodation with China has amounted to nothing, and that if anything China's government disrespects Tibetans and their views even more. Troops and police fan out all over historic Tibet as protests break out in all three of Tibet's traditional provinces (see map). Lhasa is quiet now under military rule (though the Chinese dare not call it that) though I have a feeling many Han will now leave Lhasa and go back where they came from as a result of the violence of the riots. Sadly, those who knew that Beijing's encouragement of Han immigration into Tibet would bring disaster were not listened to. Instead of dealing with the reality that Han immigrants were taking jobs from Tibetans and marginalizing them in their own land, thus sowing the seeds of hatred, China did all it could to facilitate Han immigration into Tibet. Perhaps China hoped that it would reduce Tibetans to an insignificant minority in the land of their birth. Instead Tibetan nationalism is stoked, and now hundreds of new martyrs are being created that will keep the hatred for all things Chinese alive in Tibet for generations. It did not, and does not, have to be like this. But it will only change when China changes, when its leaders are wise enough to reflect on their past mistakes and learn to deal with Tibetans with compassion and understanding, not violence and lies.
Meanwhile the nations of the world dither on about how they hope China will not be to hard on the Tibetans, but in reality their governments, for the most part, just want all the bad news to go away so they can continue doing business as usual with China. The US doesn't have much of a leg to stand on anyway right now, after the Iraq mess and with China holding a major part of our national debt. But people around the world are getting angry and upset as more pictures and accounts emerge from Tibet. Thanks to the new technologies of today, China can no longer hide all of its crimes in Tibet, information will get out no matter what they do. In some way, our outrage must take tangible form so that China can begin to understand that a civilized nation does not do what they are doing right now to Tibetans. Maybe one day this long nightmare for Tibet will finally come to an end, but for now Tibetans need all the support they can get.
Posted by geranios at 4:17 PM 1 comment: 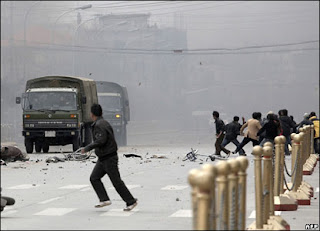 I must take a moment from discussing plants to take notice of the uprising of the long suffering Tibetan people in Lhasa and elsewhere in Tibet. I am heartbroken knowing the torture and deaths that will follow as the Chinese regime's security forces once again shed Tibetan blood on Tibetan soil. For 2000 years Tibetans have been the masters of their own land, but the last 66 years as a colony under China's boot have been the most horrific in Tibetan history. The world watches as another genocidal action unfolds, as people who have been so brutalized rise up against their plantation masters, knowing the might of their oppressors is vastly greater, but they fight on anyway with sticks and stones against tanks and machine guns. Shame on India,the worlds largest democracy and mother of Tibetan writing and religion, for blocking the exiled Tibetan's march to their homeland, and for kowtowing to the Chinese regime,as if they somehow really believe they are a second rate power to China. Shame on Nepal for beating Tibetans rallying on behalf of their countrymen and for closing Mt Everest at the behest of China so no protest can happen when they bring their Olympic torch to the (Tibetan) mountain. Shame on Greece for stopping Tibetans from lighting an alternative Olympic torch in Athens. Shame on the UN and the nations of the world for not having the balls to demand freedom for Tibet's long suffering people. Most of all, shame on the Olympics Committee for not pushing harder for greater freedoms in China and Tibet. How can the Olympics be held in a nation that uses secret police, state condoned terror, torture, and murder to control Tibet, and which has done so for over half a century? Reminds me of holding the Olympic games in Nazi Germany, after all, its not supposed to be about politics--or is it! Its amazing to me that after all these years of abuse and propaganda Tibetans still are unbroken in their quest for freedom. Such brave people!
As a fellow world citizen I support Tibetans in their quest for justice and freedom from tyranny. May God watch all of you and be with you in this time of terror. I will do my small part in spreading the word, China must know that we, the world, are watching.
"Silence equals death". Bod gyalo.
Posted by geranios at 5:22 PM No comments: