These South African daisies are commonly grown as tender annuals in the northern states, but there are cold hardy species and selections.  "Avalanche" is a particularly good one worth tracking down.  I suspect it is a white selection of the normally lavender pink O. jucundum.  I have both in the gardens now and although the jucundums did suffer a bit this winter, oddly since it was milder than last winter, they are back in bloom along with the 'Avalanche".  They will produce seeds if multiple clones are present, and both are easy to propagate by severing and replanting pieces from the stems that root as they grow outwards.  I usually put some coarse sand over some of the stems as temperatures drop and sometimes cover them lightly with wood chips to minimize dieback during cold winters.  If the stems survive they resprout quickly when spring arrives.  They bloom throughout the growing season but are especially spectacular right now.  I think the very mild and rather strange winter, with arguably the worst weather in March (!) was to their liking so they are making lots of flowers right now. 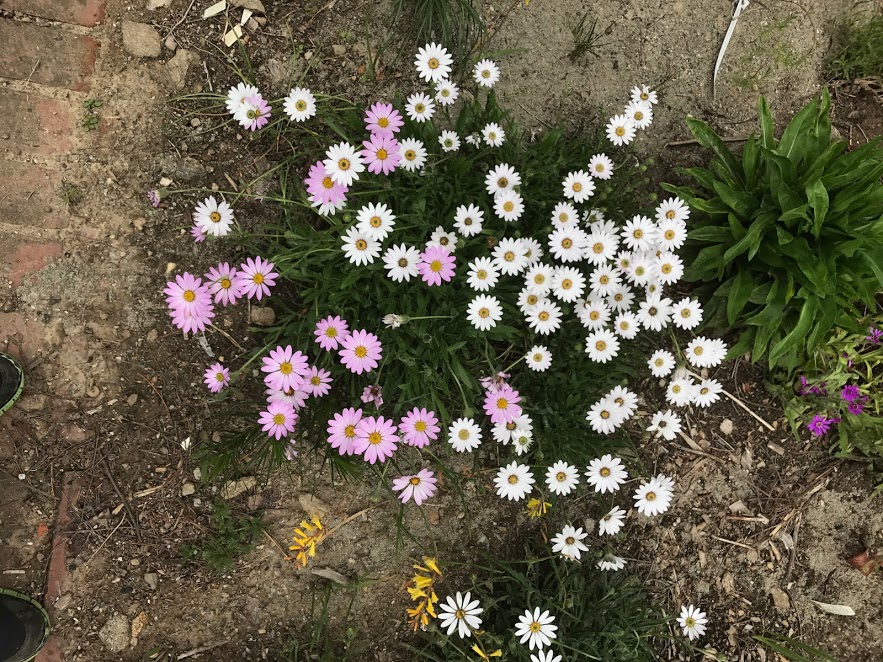 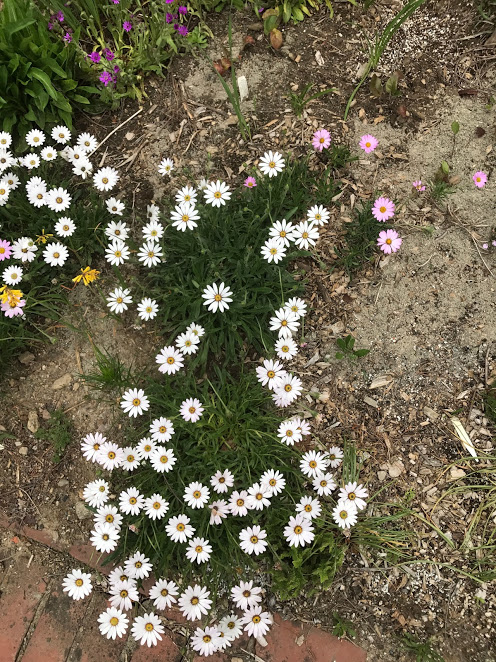 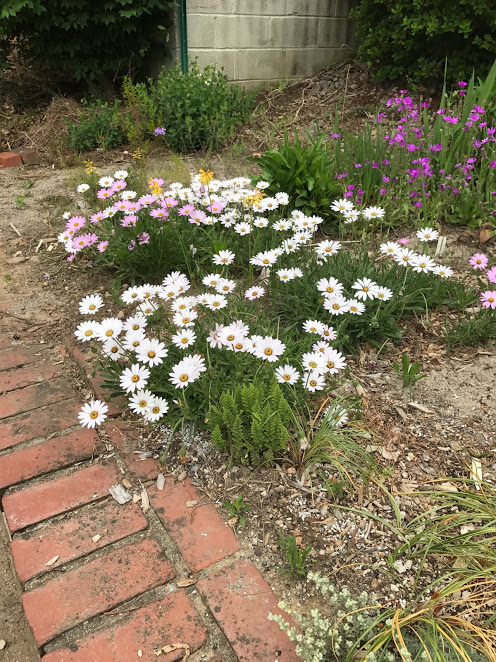 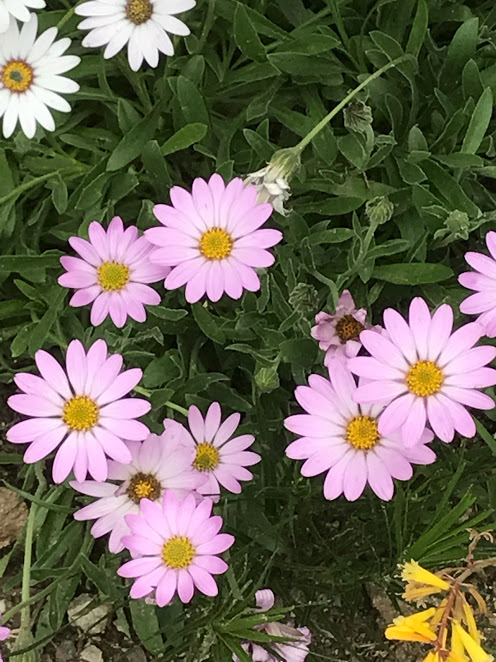 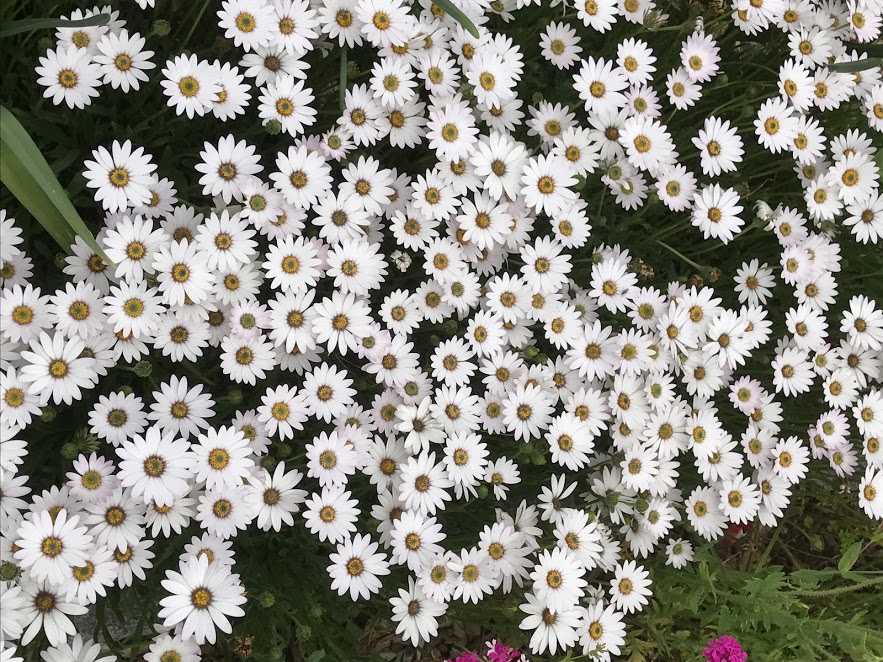 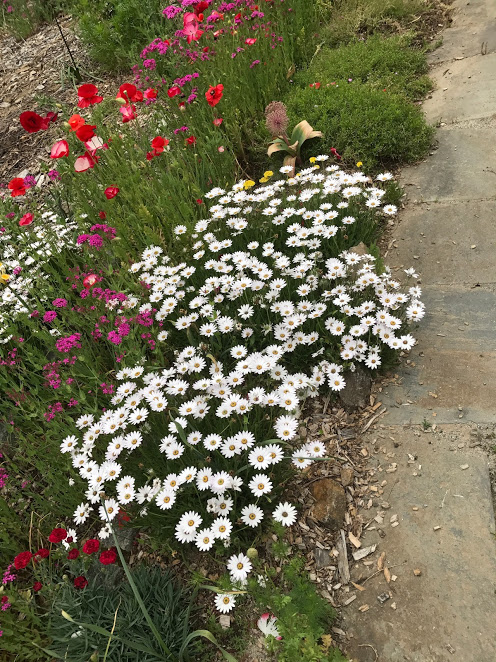 Seeds of Osteospermum come in two types, one somewhat triangular and nut like, and a flatter rounded seed.  The latter is probably primed for faster germination whereas the other is supposed to remain viable for longer, so the plant hedges its survival strategy by having two different types of seeds.  However I havent really noticed much difference in germination of either, if anything the first type of seed seems to be viable more often than the flatter ones.  I should get a good seed crop from the area where both jucundum and "Avalanche" grow together, but "Avalanche" alone rarely sets seeds.

This old fashioned biennial, or really perennial in my experience, is one of the highlights of the season here.  I grew mine from seeds, and that really is the only way to do it as the newer "sweet williams" that come in packs or pots are quite inferior to the real thing.  They may bloom their first year but they don't have the dense flower heads and wild array of colors and patterns of the real thing. 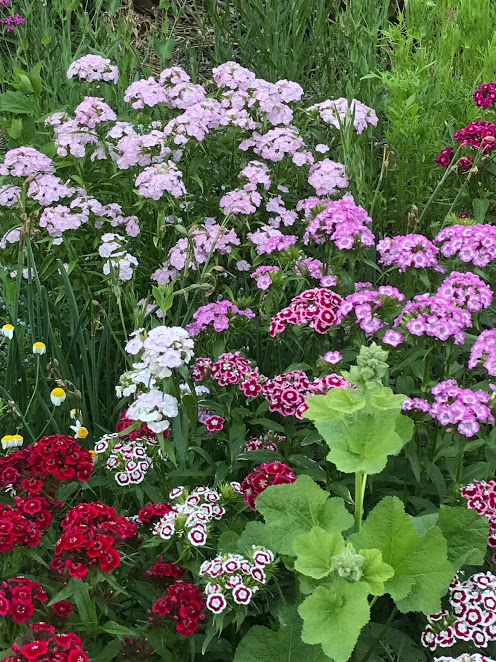 They do need to go through one winter to flower, and while some plants may be short lived perennials they usually do make vegetative growths at their base which become flowering stems the following year.  I suppose one could separate and root these if one had a particular clone that was especially prized.   But allowing them to seed will give a wide variety of zoned, spotted, and/or bicolored flowers in colors ranging from white through reds and red purples. 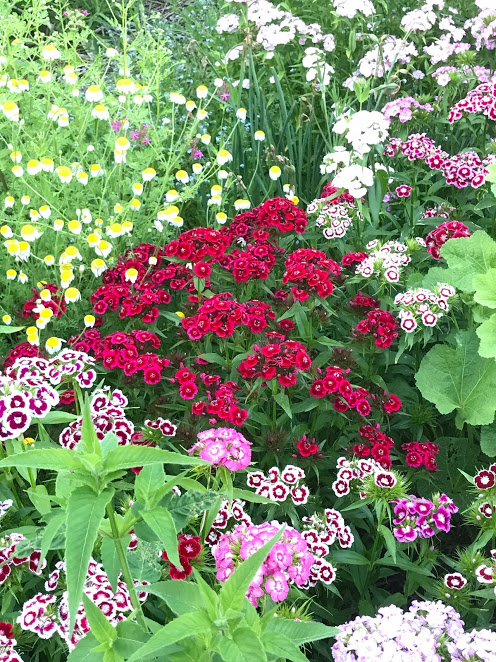 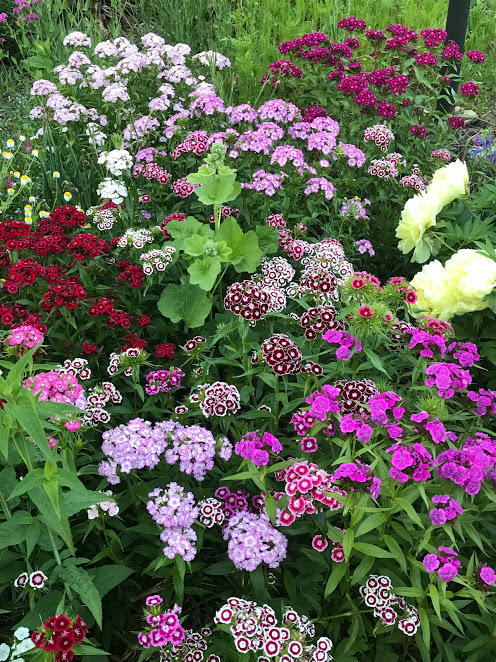 Posted by geranios at 5:36 PM No comments:

Right now many Crinum bulbispermums are coming into bloom and/or spiking in my gardens.  I have a number of plants grown from South African seeds from the Blomfontein area, as well as others from US sources.  The latter may contain other genes in them, as crinums are a staple in the South and seed freely when happy.  True bulbispermum is supposed to rarely if ever offset, but they do produce lots of large green seeds which must be sown fresh.  Those seeds also take time before they reach flowering size.  Mine have taken anywhere from four years or more to do so, but now most of the first batch are flowering.  A few of them did flower last year, but now all seem to be flowering sized.  This is probably one reason they are not commonly sold in nurseries, for they are not an ideal pot plant, taking a rather long time to reach flowering size and not growing all that well in pots to begin with.  I grew the seeds in large pots until the bulbs were more or less tulip bulb sized, then planted them deep in the soil to protect them from freezing.  They have survived both harsh and mild winters, and pop up back into growth quickly after the last frost date has passed.  They are especially profuse with bloom this year, and if they do as they have done in years past, more spikes will follow sporadically during the summer and even fall. 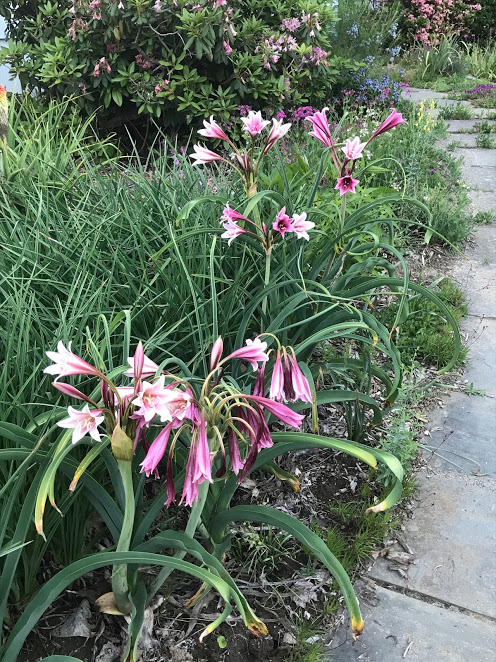 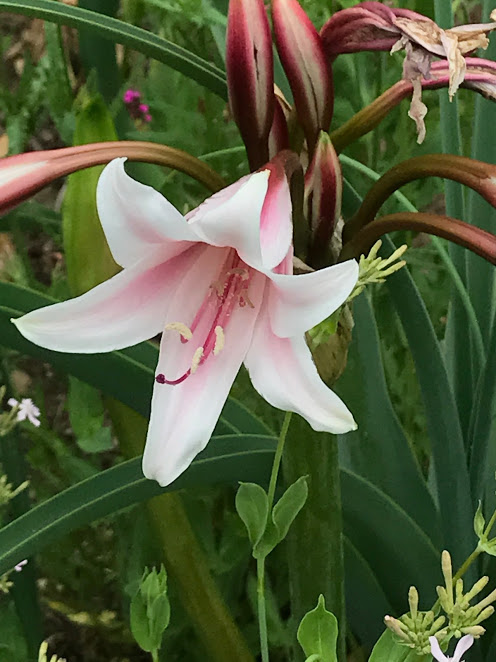 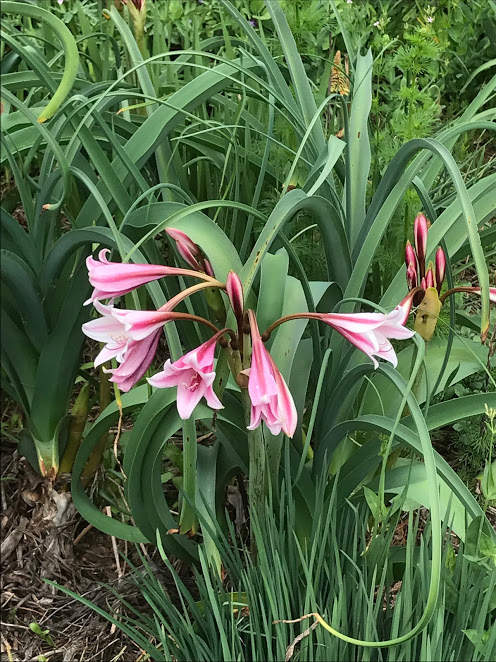 The blue green wavy leaves are diagnostic for this species as is the not so wonderful floral scent.  There are other crinums that give off a wonderful fragrance but this is not one of them.  Fortunately it can and has been used to create other cold hardy crinums some of which may be better in the fragrance department. 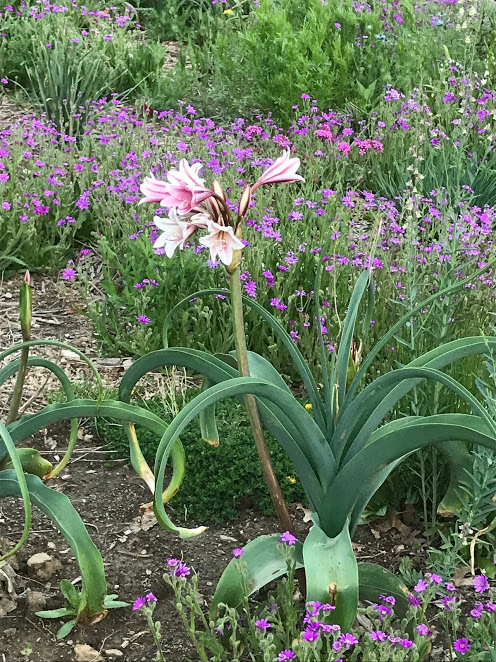 Even without flowers the foliage has a commanding presence in the garden.   Needless to say no one else in the neighborhood grows these, nor anyone else in my state as far as I know.  Besides the trouble of finding them in the trade, the other reason they are not widely grown up here is because most gardeners who are aware of crinums probably think they all are tropical plants, but that is not the case with this one. One of the neatest things about gardening is trying plants that are "not supposed" to survive in your area.  Sure, many might not survive, but many will, and horticultural rule breaking makes for some of the most interesting gardens in my view.

I really like this different sort of Ornithogalum from Georgia, as in the Caucasus, not USA.  It forms tall spikes that flower rather late for a spring bulb, just as the foliage is dying back.  They are quite graceful among the other flowers in my garden right now. 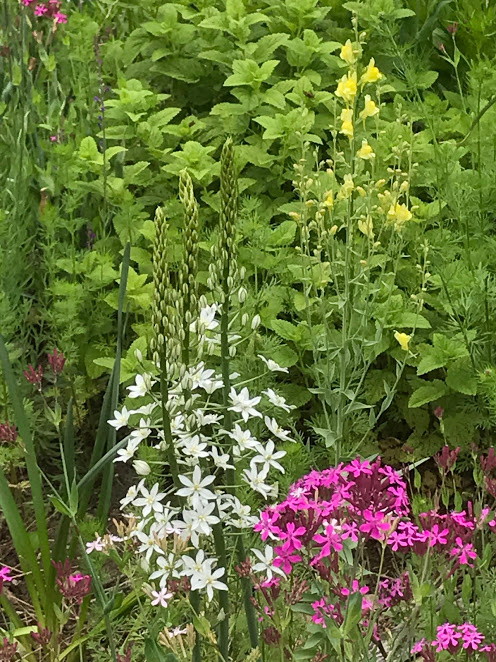 It does produce seeds which can be used to propagate more, but I haven't really tried to grow more intentionally as the bulbs are quite cheap in the fall online bulb catalogs.  Sowing them in fall as with most spring bulbs should work, and germination should commence the following spring. 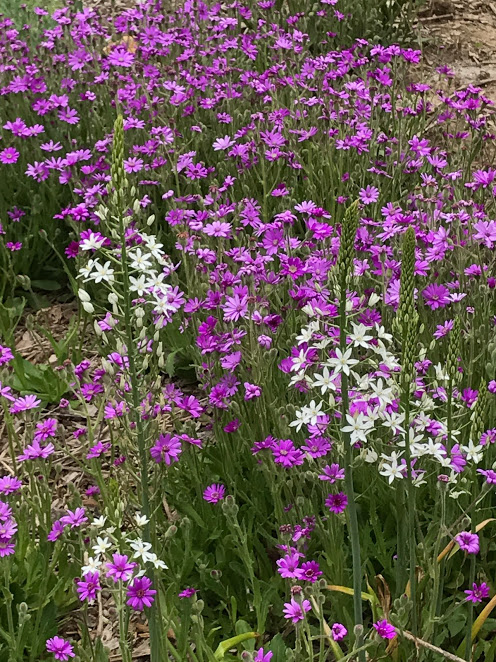 Posted by geranios at 4:59 PM No comments:

Senecio is an overly large genus spanning just about all the continents, except Antarctica of course. No doubt it will (or has?) be broken up into separate genera by the molecular cladists.  However at this time one of the peculiar things is that in a genus of overwhelmingly yellow flowered plants there are several from the southern hemisphere that are shades of purple.  I know of at least one species in South America, but the ones I am most familiar with grow in South Africa.  Three cold hardy species find my gardens very much to their liking, and all three are blooming now.  The first species, Senecio macrocephalus, is the lowest growing of them, and also puts on the briefest show.  It is in peak bloom now, forming a sea of color in the front garden and also in spots in the back gardens.  Flowering lasts a few weeks and soon copious amounts of seeds will set.  These fly in the manner of dandelions and germinate quickly to start more plants which will add to next year's show.   The fleshy leaves lie on the ground in a rosette and are wider than the other two species I grow. 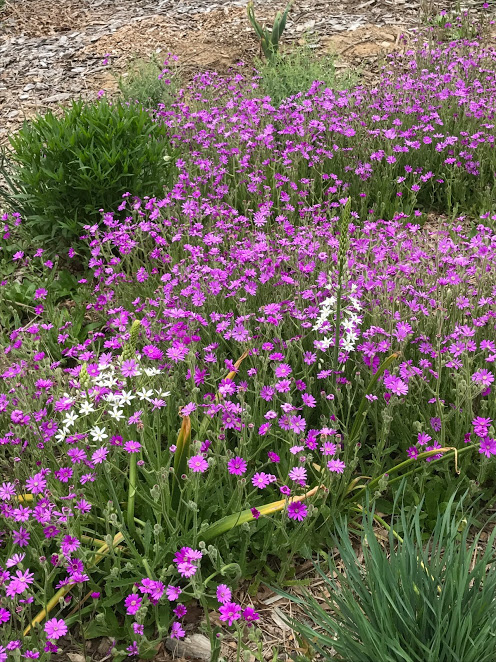 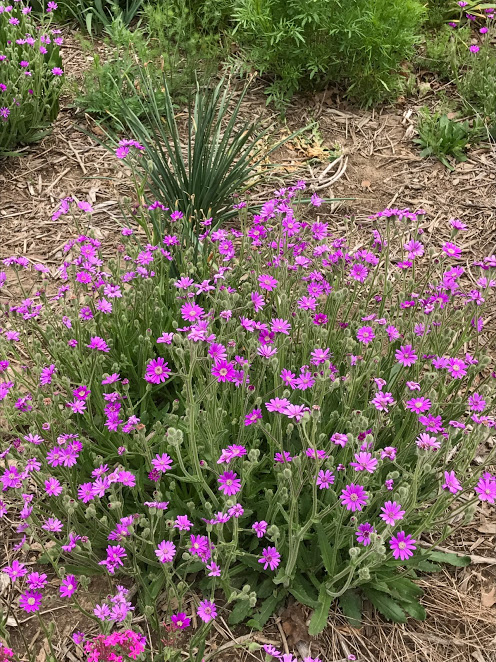 Senecio polyodon grows in boggy areas in the Drakensberg and was the first of the purple South African senecios to be introduced into the US.  Panayoti Kelaidis of Denver Botanic Garden collected it on his first expedition to S, Africa and it remains in cultivation in the US and Europe to this day, though I would not say it is common in the US.  It produces smaller flowers than S. macrocephalus on slightly taller stems.  The foliage is not as succulent either and is long and narrow by comparison.  It is beginning to flower and will flower for well over a month if conditions are suitable.  It will also self seed, but not as robustly as S. macrocephalus.  In fact I have to rouge out seedlings of S macrocephalus to keep it from outcompeting S polyodon. 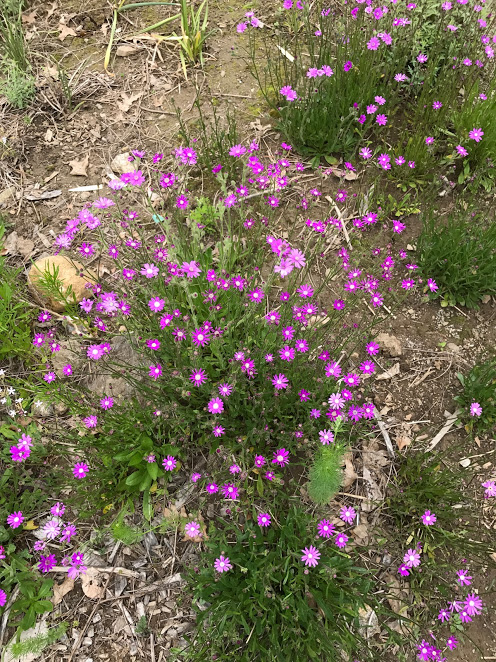 The third species is not yet identified, but came from the Tiffindell ski resort area of the Drakensberg so I refer to it as Senecio sp. "Tiffindell".  It is the only one of the three species that is stoloniferous in addition to self sowing.  So it is able to grow into a large patch rather quickly.  It flowers quickly, within a few months from seed.  Flowers are bigger than S. polyodon but a bit smaller than S. macrocephalus.  It does a mass flowering right now, with sporadic blooms appearing the rest of the season.  It is at least as vigorous as S. macrocephalus in my garden, and while it might not out compete the latter since its leaves are not as large, its ability to spread by thin stolons does give it an advantage over the other two species. 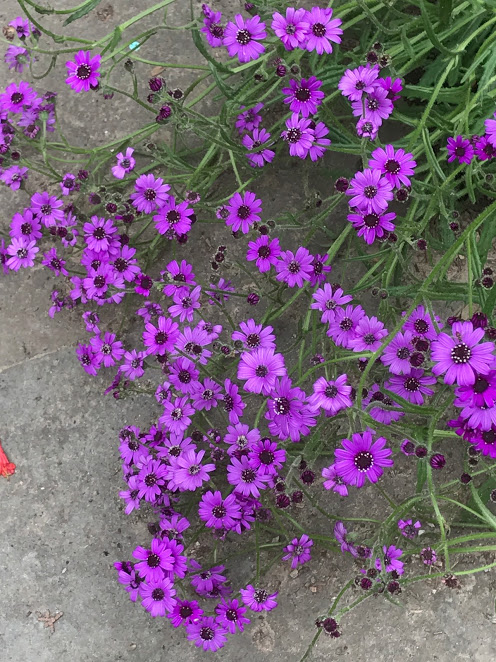 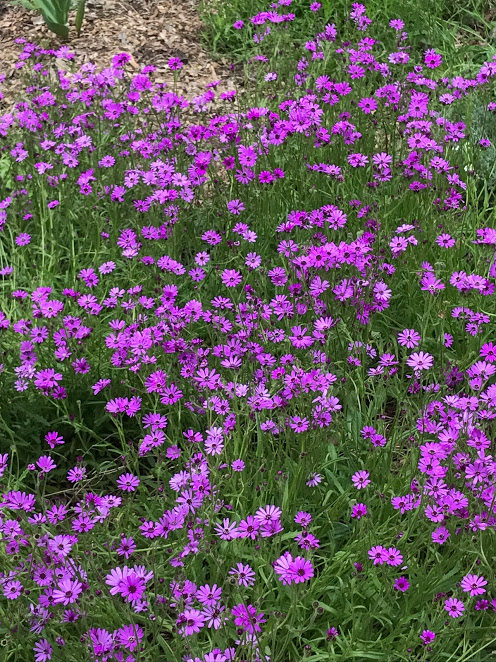 All three species are readily grown from seed and appear to be quite cold hardy.  They do not appear to be hybridizing as far as I can tell, though they are rather similar in appearance and in peak bloom time. They also like moist soil, though they do tolerate some drought in summer after their main flowering period.  Lately it has been quite cool and rainy, in fact this is probably one of the coolest and wettest springs I can remember, and all three senecios are doing extremely well.  The mild winter also resulted in practically no dieback of the foliage so that helped too.  None of them like really hot weather, though they don't suffer much here in New York but I am not sure if they could deal with the summertime heat of places like North Carolina. As with most Asteraceae it is best to grow a few plants from seed to ensure that fertile seed is set as many Asteraceae are self infertile. Individual plants of these senecios may not live beyond a few years so having seed as a backup (or seedlings coming along, which will happen if there is bare ground nearby) is the best way to ensure that one will be able to enjoy swathes of senecios for years to come.

Posted by geranios at 3:22 PM No comments: