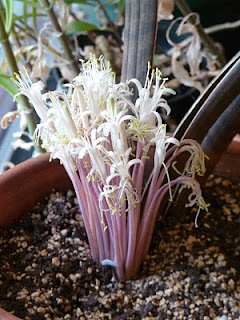 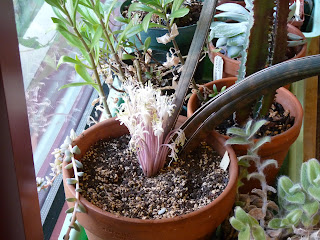 I grew this plant, and several others, from leaf cuttings I got many years ago from the Botanic Garden in Pretoria, South Africa. It was a species collected in Venda, one of the old "homelands" of South Africa, right up near the border with Zimbabwe. In doing some internet research, it might be the same thing as something going around with the name S. hallii "Pink Bat", but I have no idea if the plants come from the same source as mine. It is a slow growing and small species, but not hard to cultivate, and it eventually it produces a rather robust rhizome. This year one of the plants at school finally flowered--and what a surprise--flowers that pop right out of the ground, something I have not seen in Sansevieria before. Some more internet sleuthing reveals a similar phenomena in S. fischeri (aka S. singularis), maybe that is what my plant is? The flowers were very attractive, and now there are berries forming right at ground level, helped, no doubt, by my efforts to self pollinate the flowers. I wonder what pollinates it, is it rodent or moth pollinated? The pink foliage is attractive and distinctive, and the pink shows up even better in bright sunlight.
Posted by geranios at 9:32 AM No comments: 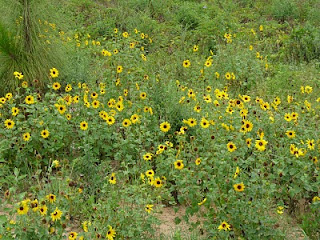 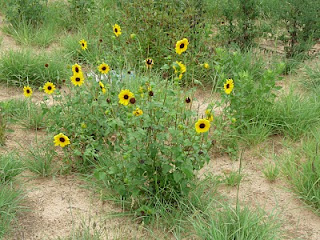 While meandering on the back roads of South Carolina on my way back from Woodlanders to my sisters apartment in Charlotte NC last July, I found this striking dwarf sunflower. I pulled over and went to take photos and gather seed, and when I got back to the car I realized my socks (and leg skin) were impaled with numerous spikey seedheads that looked like medievil weapons. They turned out to be seedheads of something called caltrop grass, an evil plant indeed! Trying to remove the spiked ball seedheads with fingers only invited more pain via perforation, so I removed them with pruning shears, not an easy task. Well, at least it wasn't fire ants or rattlers/copperheads, which represent other potential incoveniences for the down south seed collector.
This is an annual plant which has a preference for disturbed habitats, which indicates that it will be easy to grow in my garden next year. The seeds are smaller than typical sunflower seeds, and the plants evidently more floriferous. I think they would look great in a sunny, well drained spot.
Posted by geranios at 6:15 AM No comments: 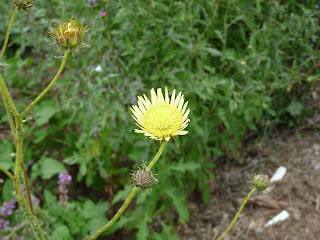 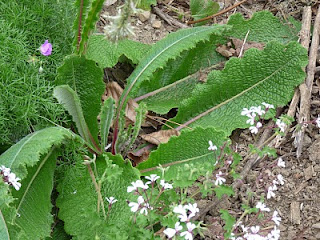 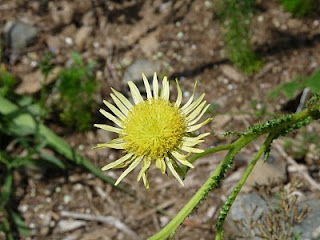 I have a particular fondness for the genus Berkheya, most of which are found in mountainous regions of South Africa. They tend to have prickly but attractive foliage and large daisies in yellow, white, or sometimes pale blue. Berkheya radula is one of the less viscious ones, with pale yellow flowers borne on attractively winged stems. Although I have two plants grown from seed, and they both flowered twice in the school garden this year, they never quite overlapped enough in flowering times to get them to cross pollinate--which appears to be essential in getting fertile seed set, as with so many other Asteraceae. The large leaves are also attractive in their own right; they are a deep green with a puckered texture and a white underside. This species is not from the highest altitudes in South Africa, so I chickened out and dug both plants for overwintering indoors after some light frosts. They appear to be regrowing just fine under lights in my classroom. I will set them out again next year, and hopefully get enough seed (or buy some more when it is available from Silverhill) to leave a few plants outside to test for winter hardiness in the future.