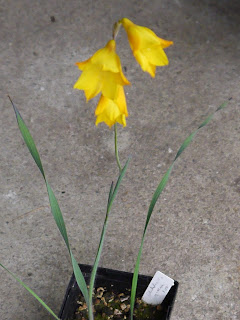 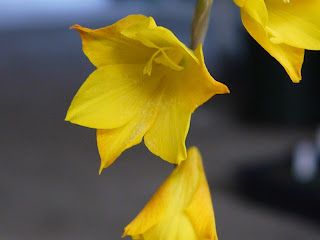 Gladiolus aureus is a very special plant, known from a single locality on the Cape Peninsula, where it is highly endangered by encroaching alien vegetation.  It is in limited cultivation outside of South Africa, but I got seeds years ago from Kirstenbosch when they sent free seed to members of the Botanical Society of South Africa.  I kept these seeds refrigerated for many years, and was able to get three healthy plants from the packet.  One bloomed this year, and I traded pollen with someone in California who had one clone only (and he reported it is self sterile).  I was unable to set seed with the pollen I got, though I hope he was more successful.  In any case, it is likely that the other two plants will flower next year, then I should be able to set plenty of seed.  It is a diminutive plant, not even a foot high, but the flowers are eye catching and charming.  I grow it in a cold garage under lights but it can get some winter sun for part of the day as well.  I noticed that my winter growing plants did very well in the cold garage this year in our new home, better than they did in warmer conditions in the apartment atop my parents house where we were before.  However I also found out one bad thing, Uncarinas (a genus of mostly large growing caudiciform plants from Madagascar) do not store well cold and dry, they don't mind the dry so much for winter (I've kept them in my classroom in past years, often dormant) but they hated the cold and I lost several to rot and they will be hard or impossible to replace.  Ditto for adeniums, cold=death, but at least they are common enough. Yet summer growing bulbs stored very well, and the winter growers which like cool temperatures anyway thrived.
Update 2016: All three did indeed flower the year after this was written, and I got quite a bit of seed, enough that one of the plants exhausted itself.  Seed was sent to growers in California, Argentina, South Africa (where I found out it was not in cultivation, surprisingly, at least among bulb enthusiasts) and Australia (note to self: I need to contact those folks to see how they are doing, but I do know that Rachel has been successful with them so Silverhill Seeds actually has offered some seed recently on their list).  I also have three pots of healthy seedlings which should produce their first flowers this year, more next year. As far as I know, the plants that remain in habitat are still in grave danger from invasive acacias and encroaching "informal settlement".
Posted by geranios at 5:55 PM 1 comment: