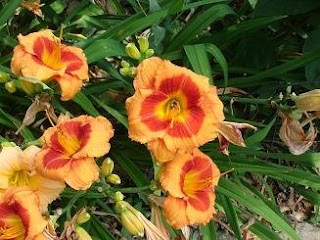 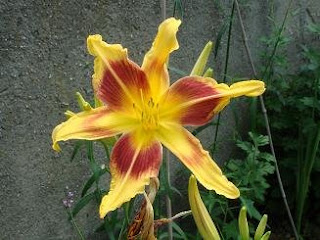 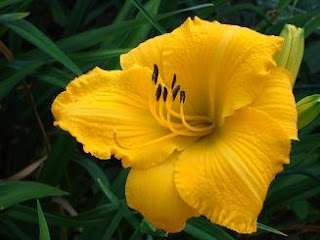 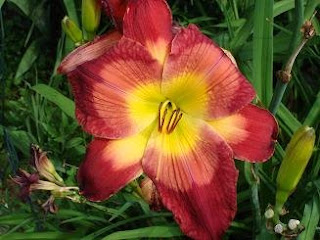 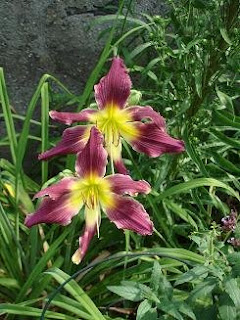 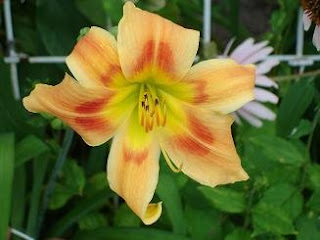 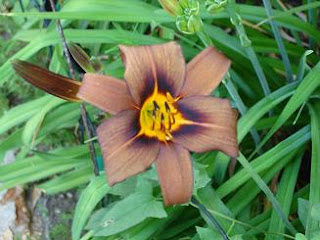 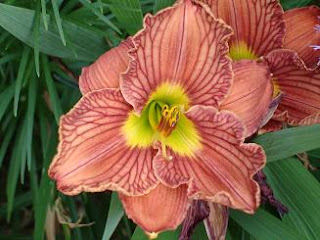 Daylilies might seem too common for serious plant nerd to consider, but as with most plants, there is much more to them than what most gardeners typically see, such as the ubiquitous Stella d'Oro yellow daylily planted everywhere. Not that Stella d'Oro is a bad plant, on the contrary its performance from late spring till frost is legendary, and its easy reblooming habit is something daylily breeders would love to make more commonplance in their creations. The triploid form of Hemerocallis flava, the common orange "ditch lily" is also everywhere, amazing for a plant that doesn't make seeds. Its secret is to grow from tiny bits of its spreading rhizomes, and its tough constitution, as it tolerates more shade than more refined daylilies, and it is widely grown for its reliable blooms and lack of pests (except in the South, where the fairly new disease daylily rust has made daylily growing more akin to rose growing with the need for frequent sprayings--fortunately the rust thus far has not been able to survive cold winters, effectively sparing much of the US from its ravages).
The best way to find interesting daylilies for your garden is to actually visit a daylily grower to see the plants in bloom. Photos are somewhat unreliable, since they don't always capture the finer aspects of the flowers appearance, nor do flower pics reveal habits of the plant. For example, a great many cultivars have flowers way down among the foliage, when they would look better if they were a few inches higher up. I've been to relatively few nurseries, but most of my daylilies come from two, Grace Gardens in the Finger Lakes region of NY, and Marietta Gardens in southeastern North Carolina. I visited Grace Gardens a few times during the summer while doing the wine route around Lake Seneca, and whatever survives for them will have no problems in my gentler zone of NY. It is a pretty place in a very picturesque region. From them I got Novelty Number, pictured above (light orange, reddish markings, yellow center with a light colored old echinacea bloom behind one petal). It would be considered unremarkable among serious daylily growers, but I love the way the colors blend, and it is a reliable performer for me. Also from them was Lady Neva, a huge orange yellow "spider" with purplish zones on the three petals, and Diabolique, a purple spider with a yellowish center. Milk Chocolate is a wierd one with a color that looks like its namesake, but with a warmish yellowish glow when seen in the "flesh" that make it quite appealing. Bold Tiger is a good performer, nice bright orange flowers with red zones that are borne in large numbers, as in the photo. Mary's Gold has a huge golden yellow flower that attracts attention as well. Marietta's Gardens is my source for the unusual Nowhere to Hide, which has amazing darker veination in the dusky pinkish flower. Also from them is Trooper, a big bold flower borne on a tallish plant, it appears more red than the pic indicates, and has two shades of such, with a yellowish center. Marietta's is a huge place, and I have to say that they gave me the largest plants of the vendors I have broght from, both when I stopped by in person and when I ordered via mail from them. Their fields are huge and contain what must be one of the largest selections of cultivars in the USA. There are many other growers all over the country, and daylilies have quite a large, enthusiastic, and serious following in the US.
Best of all, once you have some cool sorts, you can cross them to get your own unique daylilies. Most of the offspring will be unremarkable, though nice enough garden plants, some will be outright dogs, but you just might get one that is worthy of registration as a new cultivar. Crossing them could not be easier, just remember which ones are dips (diploids) and which are tets (tetraploids) because you can only cross within those groups, not between them. Generally the dips set seed more easily than do tets. Not all cv's make seeds, for example Mary's Gold is pollen fertile but will not set seeds. The round black seeds have fairly limited viability, so should be refrigerated soon after harvest and then sown in spring. You might see your first flowers in the second year, and certainly by the third for most seed grown plants.
Daylily season usually means July in my area, but in fact with careful selection among species and cultivars, I have bloom as early as May and as late as September. Breeders are hard at work trying to get more varieties for both extremes of the bloom period, especially among the late bloomers.
Posted by geranios at 6:51 AM No comments: