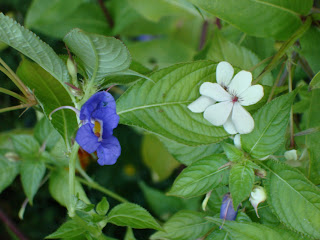 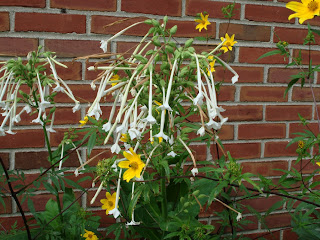 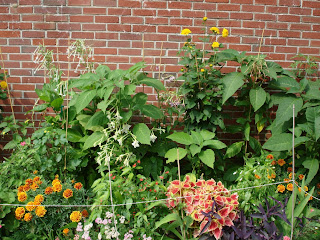 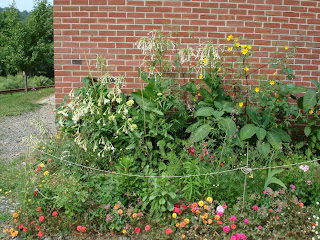 I had a lot of fun this year at my school setting up a small garden in a not so promising spot. It is between a sidewalk that some of us use to enter one of the buildings (the one I teach in) and a wall with an overhang above. The overhang causes a dripline halfway through the length of the plot during heavy rains which makes growing anything there difficult. So as I dug the plot I left rocks and gravel in a narrow band following the dripline so I could use it as a path for walking when working in the garden, and keep plants away from it. All kinds of interesting things turned up while digging, along with endless rocks, things one might expect near a school like pens and rulers, but also numerous nails and rusty, unidentifiable items as well. Though dug and planted during mid to late June as things were winding down, the speedy progress that the seeds and plants made was quite remarkable. I imagine the abundant sunshine and complete lack of tree roots helped, along with some fertilizer. I put in over 100 taxa, and let them duke it out, with some "editing" along the way as needed. The weeds never had a chance!
A row of portulaca in the front bloomed all summer, and provided a nice learning experience when I had students sit on the sidewalk on a lovely day in September and learn how to gather the seed to take home for their own gardens. It is suprising how few students really understand the connection between flowers and seeds, maybe because it has not been experienced but rather only learned from books for most of them. Nicotiana sylvestris was incredible in how fast it took off, blooming all summer and fall with its dangling fragrant white trumpets in clusters that look like starbursts. It produced gobs of seed, so much that in addition to what I collected, I was able to seed the nearby woodland edge with plenty of it, just to see what might happen next year. Behind the Nicotiana flowers in one of the pics a native yellow Bidens is blooming. This spectacular yellow daisy is sometimes found along roadsides, but not commonly in our area. It is an annual which blooms late, usually September, and reseeds prolifically in gardens, but excess seedlings are easily removed.
The camera was having a hard time indeed catching the true colors of the improbable pairing of the blue Impatiens namabacharwensis from Tibet and the odd grey/blue/green flowers of Pelargonium quinquelobatum from NE Africa. A couple of coleus and a large flowered dwarf marigold, "Red Sun" from Chilterns Seeds in the UK added much color to the garden. "Red Sun" was advertised as having really huge flowers, up to 5 inches I think I read. Well, not even close, but pretty large for a dwarf tagetes, and heavy enough to sometimes bend over if hit by heavy rain. They did bloom nonstop until a frost this past week. I set out a number of Brugmansia seedlings and plants in the back of the garden, only a couple of the plants bloomed but the seedlings made good growth. I dug them up and put them in the classroom, despite defoliating and barerooting them, one of them rebounded quickly and is about to open four huge blossoms over this weekend!
I purposely included many plants that the local deer would find toxic or distasteful, and in fact none bothered my garden all summer, though they are all around the school. The most noxious smelling plant in the garden was a species of Hemizyga I got from Silverhill Seeds, the species escapes me at the moment, but it is the most vile smelling thing in the mint family that I have ever come across. Pretty light pink salvia like flowers in October adorn it, and the foliage isn't bad looking, but yeech!
A double flowered helianthus I got from a mailorder sale from Bluestone perennials took off and bloomed all summer long. It does not set seed, and I have no idea which species (or hybrid) it is, in fact I wonder if it is really a helianthus, could it be a rudbeckia? Whatever it is, it is a real "doer" even in the less desirable conditions I have for one of them at home.
I've been able to harvest many seeds from the garden and take cuttings of tender perennials to have plenty of material for the garden next year. Many of the annuals will resow anyway, and there are several hardy perennial species planted which should make the garden quite prolific again next year.
Posted by geranios at 6:49 PM